Recently, I decided to take a look at an event I heard about through some group chatter, as well as the Destination Guide: The LEA Avatar Games, also known as the “Art Games.”

Join the fun as the LEA Avatar Games (a.k.a. Art Games), held each Monday at 4:00 p.m. (Pacific). Watch as participants run through the obstacle course and the audience tries to to slow them down! Check out the sign-up sheet on Thursdays for contestants and audience participants. More info at: http://bit.ly/l30NvC. 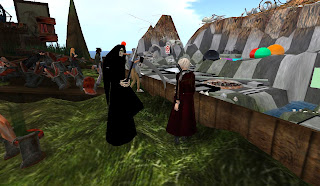 LEA standing for “Linden Endowment for the Arts, I was expecting something conventional. Getting there, however, it was soon obvious the event was anything but conventional.Right away, I heard a familiar voice. It was Crap Mariner. He was moderating the games, along with Honour McMillian, describing what was going on from his slightly twisted point of view. Indeed the whole place could be called a bit twisted. The obstacle course that made up the maze looked like a surreal piece of art. There was something familiar about it. Then I recognized how the audience seating looked like that from a broken-down building, plus the metallic sculptures in a couple places, and then the “Daughter of Gears” and the “Rabbicorn.” Bryn Oh had made the obstacle course, whom stood on a platform over it as the “Platform Bastard.” No wonder these were sometimes called the “Art Games.” 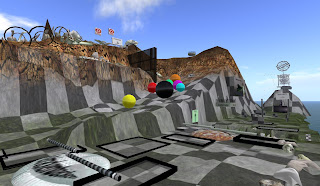 Contestants were in a small skybox until called to materialize at the start of the course, which was littered with giant bones and the first half having a checkered surface. Then when the timer started, they would have to run a gauntlet of fire from the audience from guns provided by a dispenser, known as “The Grand Walloper.” While doing so, they had to get over a ditch of water, “The Cesspool. Then they had to get past a couple sets of whirling posts on sticks, “The Pefrackembacker.” And that’s just the first quarter of the course.

Turning the corner to get up the hill, they were now out of effective range of the whalloper guns, but had to dodge an avalanche of huge marbles that rolled down. Getting past those, the checkered surface turned rocky, and was half over. Then came another obstacle - a large wall of which the only way over was to wait for a set of blocks to arrange themselves into a staircase. Around the next bend was the final quarter of the course, which had cages of barcodes dropping onto the runners. Hopping over a couple bones, the last thing to do was to run under the lamp, and the course was over. The runners got two chances to run the course by themselves, then at the end all of them would race at once, free to use walloper guns on one another. 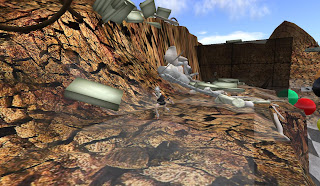 The course was a bit difficult to run, most of the contestants needing about four minutes to do so. Two runners just barely did a run in less than two. Crap Mariner changed to his Grim Reaper outfit early on, and yours truly didn’t escape his notice, commenting as press I was a non-combatant, and not shooting at the runners. Of the obstacles, the wall on the third quarter was the most difficult, a few runners kept stumbling as they tried to jump from a halfway completed brick ramp. A couple tried to climb up the cliff, which would get them both around it and skip the barcode cage obstacle. Only one made it through that way.

The fastest run on the day I was there was done by Theblackcloud Oh, who took one minute, 55 seconds. Afterwards, Crap Mariner and Bryn Oh were available for anyone who wanted to ask them anything about the race. At the end of the season, the best runners will appear in that show and compete for a prize.

Whether you like sports or art, this is an event worth seeing at least once.