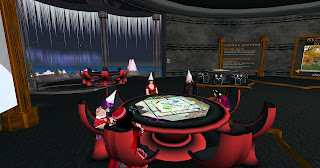 I spent the last few hours of 2011 with old friends and new. My neighbors on Syzygy met in the Community Center for games of Simopolis and Greedy, Greedy. Syzygy Eos (18, 20, 76). B. W. Jinxing, who frequently organizes the games, rounded up gamers Motoko Jenusaki, Samantha Glume, Pipsqueak Fiddlesticks, Crescent Renard, and Elric Anatine. A few of us couldn’t stay to play, but we toasted the coming new year before dashing off to other RL and SL parties. 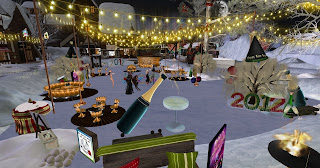 A huge party was held at the Winter Village on Old Europe (32, 204, 22). The New Year had already arrived in many of their home locations, but the champagne was still bubbling on SL. Residents were dancing on the ice when I arrived. They also have sleigh rides, a ferris wheel, shops, and other things to do here.

I caught the end of the celebrations at Alt 7 on Pomponio (23,82,71). Alt 7 is SL’s largest alternative music club. The celebration here was more informal since they primarily focus on their music. But I was able to say hello to my neighbor Celtic Infinity, who manages the club, before dashing off to my next stop. 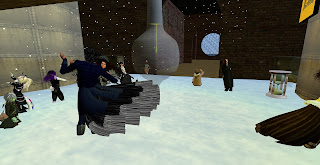 The snow was falling by the time I reached the party on Port Babbage. Their celebration was held on the rooftop of the Rookwood Brewery & Bottling site. Partiers danced in the snow while the sands of 2011 slipped away. The DJ played the crowd’s favorites, including hits by Electric Light Orchestra, Eurythmics, and R.E.M.

Posted by Bixyl Shuftan at 6:05 AM