Last week, my friend's partner Lavendermist McTeague, whom had passed away on January 20th, was given a memorial on the Grid. On Saturday the 28th, she was given a funeral service. Leading the ceremony was a group of bagpipers, led by Sue 'Piper' McCullough. Lavendermist had been a member of Sue's PipeDreams Fan Group. 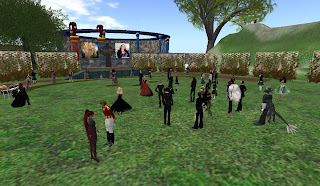 "I have played for more funerals and Memorial Services than I care to remember," she told the gathering when it was her turn to speak, "But, this time is different. ... This time, I’m playing for a woman who was not only one of 'My Girls' in PipeDreams for a long time, but who was a good friend as well. ... Lav was one of those people who’s life showed me that mine wasn’t nearly as bad as I’d sometimes think it was. I seriously doubt that I’d have had the strength to endure all that she has. ... she’d say ... after EVERY gig, and EVERY time we talked ... how our music made her feel good."

"I think I know Lav well enough to know that, while she would certainly understand our grief at her passing, she would much prefer that we celebrated her life rather than mourning her death. ... For other funerals and Memorial Services, I will play the traditional and expected solemn music. But today, I will give her the music that she so loved to hear. I will give her music that is much like Lav herself!" 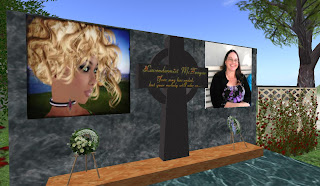 Lavendermist's partner Ote Underwood described how they met over comforting someone over the loss of the pet, described how the days went by, and how their relationship blossomed, "Lav was well-loved and she had done so many things on earth and I’m sure she’ll do much more in Heaven. I will be forever grateful to have known her. I will be forever grateful that Lav was there at the right place and at the right time and that she in a way brought me back into life. I will be forever grateful for spending almost 4½ years of my life with a friend like her. All the memories I have shared with her will forever be cherished and remembered . Lav will forever live in my heart … In our hearts."

Lavendermist's friend Suki Rexen was third to speak. She talked about their first meeting when lag was keeping some clothes of one from showing and the other pointed it out. Their friendship grew from there, Lavendermist doing a little modeling for Suki's business, "I feel very lucky to say she was my friend, and we worked together."

Following the speeches, the bagpiper band prepared to play one more song, but one a bit more cheerful than most at memorial services, "This song was originally done by Bruce Cotter. Last year, I met Bruce, and he asked me to do a new recording of the song with him. He then changed the name of it to: Susan’s Song. The feel of this song will always make me think of Lav. So, this is what I will play for her now. Close your eyes, and try to picture Lav as you hear this song." And then the band played. 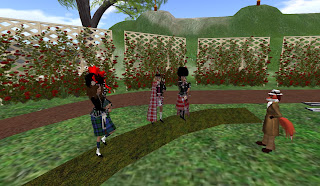 Following the conclusion, Sue thanked those attending for coming, and the people thanked the band for honoring Lavendermist. Friends got together in groups to discuss her, and over time the crowd slowly dispersed.

The funeral was held in the Hidden Valley sim, which is normally for a Minoan Crete roleplay. It can be viewed on Youtube at http://youtu.be/NG4n94QesZc and http://youtu.be/cumWvb1c_Ng . But Ote had concerns they might be taken offline, and so made the film downloadable Here and Here.