"To the Moon" With the Steelheads


On Friday, June 6th was the last of the planned events from the Relay for Life team Steelhead Salmons. At 7PM SL time, the team had their friends had their "To the Moon" event, which had been billed as a homage to the 1902 film "From the Earth to the Moon."


Steelhead's final RFL event of the season, on July 6th, is all based on A Trip To The Moon. So, come join us for a dance on the moon. You can dress in something Sci Fi Cheesy, something straight Sci Fi, or you can come just as you are. 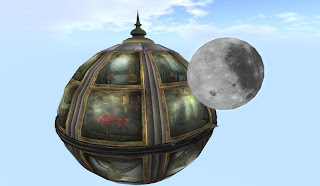 The event took place in a Victorian-style huge sky terrarium, populated by strange silvery grass and a variety of weird plants. It wasn't the moon, though we could see it from outside. The people showed up in a variety of outfits, from the 19th-Century style fashions usually worn to such evens by some Steelheads, often with Jules/Wellsian Steam Age or Fantasy touches, to modern-day spacesuits, to Fantasy and sci-fi creatures and/or outfits not normally associated with Steelhead.

Sheriff Ortega aka DJ Fuzzball, whom was never far from his fiance Eugene Burton, played a number of songs. among them were science-fiction tunes, which included the theme to Buck Rodgers "Far Beyond My Time" to "Ground Control to Major Tom," "Weird Al," the theme of "Red Dwarf," the theme of the robot anime "Big O," and a favorite of the Steelheads: "Weird Science."

From my heart and from my hand
Why don't people understand
My intentions?
Weird, ooh
Weird Science
Plastic tubes and pots and pans
Bits and pieces and
magic from the hand
We're makin'
Weird science, ooh 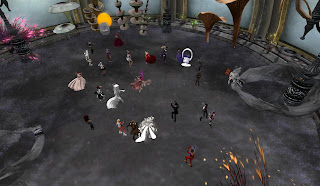 Besides the Steelheads, there was Trader1 Whiplash, RFL DJ Madonna Milena, and the Passionate Redheads' Sabine McGettin and Jasmine Dawn. There was the usual joking around from the theme songs to the outfits, and the Relay. Trader pointed out, "Did anyone notice Fuzz's Tag that I am sure he is wearing quite proudly?" Fuzzball went along with it, "Oh my gosh!!!!! Trader's giving Fuzz access to T1 during the weekend. Be afraid, everyone, be afraid. … Trader, I promise........no Shatner." Jasmine in her spacesuit kept going weightless, "Crazy Steelhead mad scientists messing with the gravity here." "Good artificial gravity here." The two-tailed vixen shook her fist, "The Gravity is a lie."

The jokes continued, "Have you ever noticed in the shows they never lost gravity and all the aliens spoke English!" "Not all the aliens. In the Green Slime the aliens talked in Japanese." "They always managed to make themselves understood."  Not all the jokes were confined to the station. As most of the participants were in the Relay group, there was some spillover to the Relay group.

As part of the fundraising, some items were auctioned. This included a number of Amaretto horses, including a Toys for Tots Special Edition. Other things up for auction included a two hour set with Fuzzball Ortega's services as DJ, which went for 2300, a KittyCats pet cat for 3000, and dinner with Baron Klaus von Wulffenbach with the condition that anything related to an Agatha Heterodyne was off-topic. 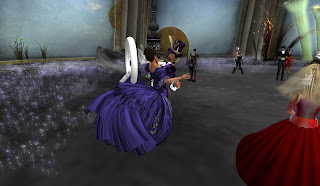 And at 8:41 into event came an announcement from Fuzzball, "Steelhead has reached L$500000." The team had gone Platinum rank. The result was a lot of "Yay!" "Hoooo!"and other cheersl "YAY!  You reached plat just after the Dr. Who team." Vic Mornington of the Dr. Who team, who was there, commented, "It also means....Fuzzy has to do two laps in a dress from what I remember." Madonna added, "Two more laps in a dress, Vic. And, those, uhh... Boot thingies someone sent in." Madonna then asked, "A week as Vic Mornington Fangirl?" "Ummm, no." "Rats, it was worth a shot." After the jokes were congratulations and thanks to one another.

One topic that got a little discussion, Fuzzball and Eugene's marriage. Rehersals for the wedding would be in a few days, and later this month the wedding itself. They've become the talk of both Steelhead and the Relay.

A fun time was had by all at the station, and everyone left happy and looking forward to the main event - the Relay Weekend on July 14 and 15th.