Fourth of July in Second Life

July 4, or the Fourth of July is Independence Day in the United States, when Americans celebrate the date their country declared itself a free and independent nation. In real life, people celebrate by going to parades, setting off fireworks, or simply holding a barbecue with the neighbors. In Second Life, Americans celebrate as well with a good party, and there were a number of those across the Grid. 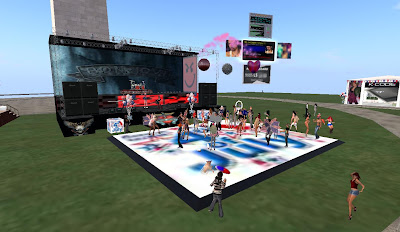 One of the bigger events was the Fourth of July Festival hosted by the Flying Tigers high above the WW2 Tribute sim. From Tuesday July 3rd to Friday July 5th, there was music and exhibitions. There were also a few freebies to pick up, such as a jacket with the American flag on the back, handheld sparklers, and patriotic ribbons. 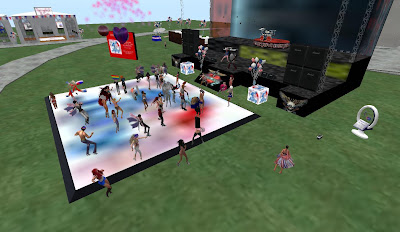 On July 4rth, DJ Heath performed, and a sizeable crowd showed up. One visitor, possibly from Europe, stumbled across the place. He didn't seem at sure what was going on at first, "Oh, this is when you Americans celebrate your Independence Day." He soon joined the party and was welcomed in. 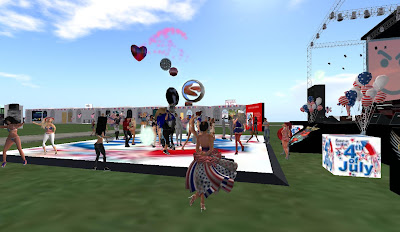 Jessii2009 "Jessie" Warrhol (center) of the Flying Tigers, was also at the festivities. At other times at the festival were a fashion show, a Bon Jovi tribute, a cheerleader squad performance, and of course plenty of fireworks. 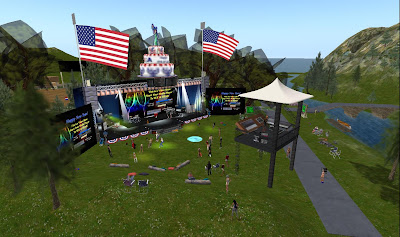 In Areo Pines Park, there was also celebration. In Equus, a stage was set up, with a band performance played out to a crowd. 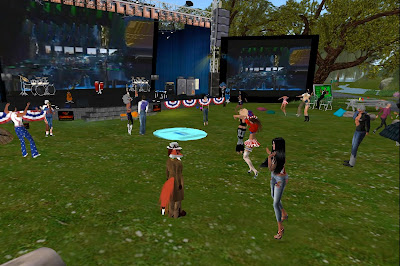 Some sat in lawn chairs. Others danced around on the ground. 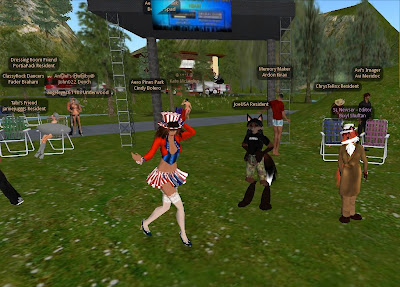 The event was hosted by Cindy Bolero. There was some irony in this celebration of freedom, there were a few concerns expressed by her about Internet legislation being debated in Washington, that they might not be able to hold music concerts like this in the future as copyright rules could make them illegal. 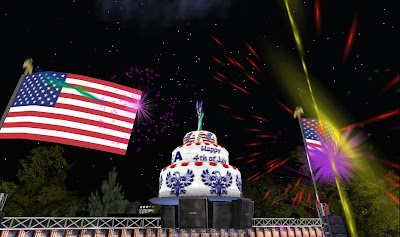 But in the meantime, there was celebration, and fireworks. 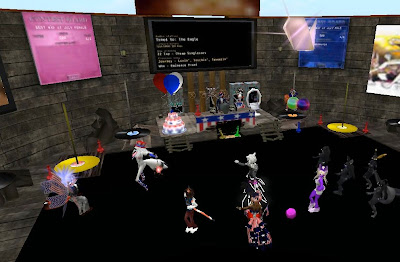 Various clubs held 4rth of July parties. Among them were Mystery's "Queen of Hearts" and Club Zero Gravity. And there was Club Cutlass in the Sunweaver Estates, which had a small gathering that evening. 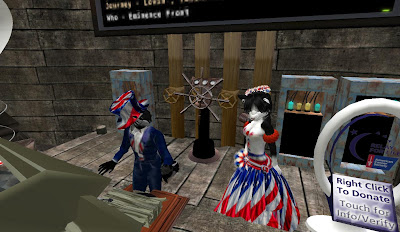 The tunes were provided by DJ Akea, whom was with his lady friend Angel.

Sunnies:  Tonight we blow the roof off Cutlass, with our 4th of July.  DJ Akea will be spinning the tunes, if we can get him out of the Trash Cans.  (Lots of good leftovers from the BBQs).  Anyways, dress up in your best Red,white and blues, to showoff your colors,  See you here.

Besides the music, Akea took a few minutes to play some people talking about what it means to be an American. Some were funny, others were more serious.

Not all at the club were from the United States. One girl showing up was from Australia. Someone joked she fit right in anyway as the country's colors were also red, white and blue.

It should be noted that the day saw some record high temperatures across the United States. So Second Life was one way to celebrate the day while beating the heat.

It was an event-filled Fourth of July on the Grid.