Weekend at the SL9B 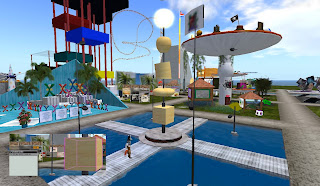 I had spent more time covering "The Birthday" then enjoying it. But I had some chances. Saturday, I spent some time exploring the exhibits with a friend, seeing Raglan Shire's 'shroom exhibit with it's pirate flag and sundial showing featured events every month, Virtual Norway with it's cabin, and others. The one that got my friend's attention the most was Marianne McCaan's "A History of Prims." She noticed the bottom prim had a creation date that predated Second Life's official birthday, as well as being labeled as being created by "nobody," and wondered what it took to get it here.

Cube, 2002: On January 25th, 2002 (If you inspect this cube, you'll see that date), an unknown Linden rezzed this cube. It is the oldest known prim in Second Life.Torus: As second Life grew, so did the options. The Torus is one of the most complex of the basic prims, with 1024 Vertices. Another prim type, the Spiral, was removed early in Second Life's history.
[12:04]  Flexi Cylinder: Flexible prims, aka "flexiprims" were introduced to Second Life in 2006. The hair industry was never the same again.
[12:04]  Sculpted Apple: A sculpted prim, or "Sculpy," is a prim whose shape is formed form is taken from a sculpty texture. They were introduced to Second Life by Qarl Linden in 2007.
[12:04]  Glowing Sphere: While not a prim function itself, the "glow" property became a common function for prims starting in 2007.
[12:04]  Mesh Duck 2012: After many fits and starts, mesh objects were added to the grid in 2011. While they remain controversial in some circles, many have learned to love the mesh. 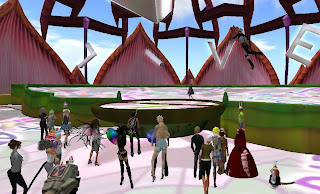 Later that evening came a live stage act: Lauren Weyland in a special episode of the gender-bending comedian's stand-up comedy act "Lauren Live" in the afternoon. The blonde with the falsetto voice had to clean up her normally R-rated routine a bit to stay within the G standards of the event.

Sunday was the last day of the SL9B, at least with events. I logged on a little earlier than usual that day to catch Holocluck Henely DJing a party in the Egypt area, at the border of Shindig/KittyCats SL9B Party Time. And a party time it was as I joined in the dancing, along with Dr Fran Babcock, Tindallia Soothsayer, and Grease Coakes. Not everyone was dancing, one guy in Viking horns just watched from a lawnchair nearby.  Holocluck earlier had joked he might not get invited back to DJ in Egypt, "being of Jewish descent," and at the party razzed a package of matzoh crackers for anyone to snack on. Hopefully Egypt's new President from the Muslim Brotherhood didn't take notice.

Looking around some more, I found some interesting places. Among them was one I had dropped by last year as well, 1920s Berlin. Dropping by the beer hall, the hosts greeted me "Herr Fox," and offered a choice of drinks, "bier," "tee," schnapps, whisky, and other drinks. I had German coffee, or "kaffee" as they called it. While I was there was probably one example of the questions they get from visitors, someone thought the place was a speakeasy, asking if Germany had Prohibition in the 1920s. Actually, the USA was pretty much alone in it of the countries in the Western world at the time. Let alone Germany, noted for it's "Oktoberfest" in the south. 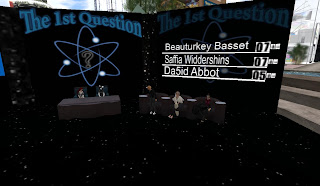 At 4PM at SL9B Negen was a special show of "the 1st Question," Hosted by Pooky Amsterdam and Hydra Shaftoe. On stage were three media personalities. Saffia Widdershins of Prim Perfect/Designing Worlds was fairly well known here, especially as she was one of the volunteers here at the SL9B. Also here were Beau Hindman (Beauturkey Basset) of Massively.com, a website covering MOORPGs, and David Abbot (Da5id Abbot) whom was with the Egypt hunt, which Pooky called a "kick-asp story."

The "tiny act" before the show was a bit different, as they were wearing "outline avatars" of which only the edges could be seen. Hydra's avatar looked odd for him, so he might have suffered from lag more than most. The show had its share of chuckles, Mr. Hindman's "word-up" being "Schnarf - the sound a dog makes when it sneezes." He had some trouble pronouncing it, though, Hydra saying "You sound like a depressed bulldog." Saffia might have been the crowd favorite, but in the end it was a victory for Massivvely. Mr. Hindman won first place. Earlier, he had joked, "Why did you stick me with two geniuses?" Pooky commented after his win "you just joined the two geniuses."

The last event I attended was just across the sim, a discussion on Steampunk in Second Life. Hosting it were Annechen Lowey and Steelhead's KlausWuffenback Outlander (Baron Klaus Wuffenback). It was detailed and informative, touching upon Steelhead and other Steampunk-themed areas in Second Life, referring to the genere as "Yesterday's future, today." The only problem was between the lag and the mesh, most of the people didn't clear up properly on my viewer. 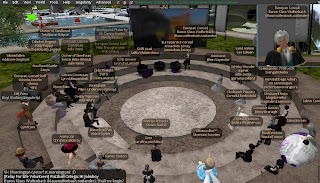 Unfortunately I could only record about a half hour of what went on before the lag proved too much for my computer, and it went through a terribly long crash. By the time I came back to the Grid, the lecture was over. So I took a break for a while, coming back for the fireworks at the Cake Stage. There would be a couple more impromptu events later on, Crap Mariner's filming at the SL9B train and his farewell video, but this was the end of this long and momentous event.

So went my weekend at the SL9B. One thing that I noticed was that while many of my friends whom were involved in SL media showed up, this wasn't so much the case with my current and past neighbors. A few told me they tried, but the lag killed the enjoyment, or they couldn't get in period, crashing upon entering. A few others apparently planned to, but missed it, "Over already?"  Some hadn't heard of it, "What's SL9B?"

Still, if only a fraction of those on the Grid attended, it was still a great party with lots to see, finding out about new communities on the Grid, such as Grey Lupindo did with the 99s, and just plain have fun.

There will be other mega-events on the Grid, such as the Relay for Life walk in July, and later this year Burn2. But the Second Life Birthday celebrations have a life of their own.

See you next year.