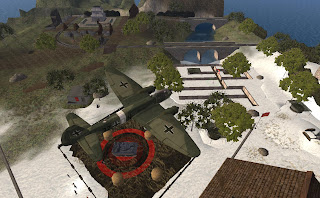 On November the 10th, the New Bastogne combat sim held it's second bomber contest. The first had been held on October 28th, but lag at the sim that say led to some unusually poor performances by some skilled pilots. So another was planned for a couple weeks later.

There were three separate categories of bombing in the contest. One was level bombing, in which the plane had to stay a hundred meters in the air with no loops or dives, with five passes at the target. Second was dive bombing, also with five passes. The third category was "anything goes" with the option of cannons, rockets, and guns in addition to bombs. Three passes were allowed at a moving tank. An administrator rode with the pilots in the contest. All planes had to be Second World War design. 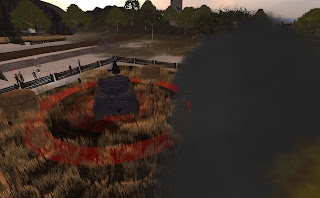 Eight pilots were in each category. The winners for level bombing were Louise with 86 points, Nydia with 64 points, and Takashiwith 30. In the divebombing competition, Nydia had the most with 53 points followed by Karo with 45 points and Vickster with 30. In the "anything goes," two pilots blew up the tank and damaged it again, Laura and Vickster with 170 and 167 points respectively, with Nydia scoring 56 points for third. 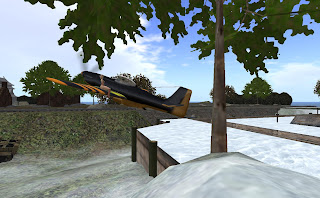 The winners of each of the three contests received 1000 Lindens, with 500 going to second place and 250 for third. There was also a raffle for each event. The competition was sponsored by Skunkette Aviation (also known as JessicaBelle Aeronautic Projects), Shana Enterprises, Buzzworx, and New Bastogne's German JG-52 group.