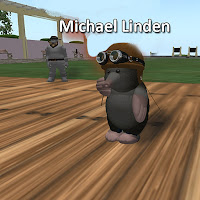 I was listening to the Metareality Podcast (http://metarealitypodcast.com) the other day, and I was struck by something Qarl Fizz said, while speaking about Linden Lab’s advertising efforts. He was talking about the funny, new video about the LL acquisition, called Blockworld: “They made fun of themselves. That is something that is completely lacking in Second Life’s advertising—it is utterly humorless.”

The Moles of Second Life could be a door to the future of Second Life if only Linden Lab would grab hold of their stubby little tails and make their work more apparent. The Moles are responsible for the infrastructure of the Mainland, and their hard work is evident everywhere. That said, it’s well known that hard workers like to play hard as well. The Moles could attract folks to Second Life, if only the Lab would promote them and their fun ways. 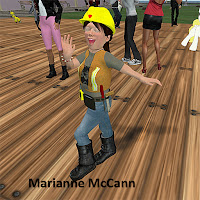 Thus, the annual event of Mole Day took place on Saturday, February 2nd (Groundhog Day, of course) in the Mole-created neighborhood of Bay City. The event was held to honor the remarkable work of the Second Life Moles in creating a world that is a wonder to behold.

The event was organized by Marianne McCann and Ever Dreamscape, and was held on the Fairgrounds of Bay City. The turnout for the event was impressive—at one point I counted about 37 residents on the sim. The guest list was impressive, and many Moles did show up, including their boss, Michael Linden. 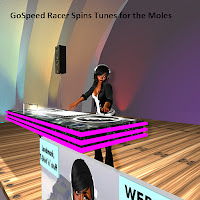 GoSpeed Racer spun tunes, and the whole group just danced, chatted, and exhibited the best of what Second Life can be: A place where folks from all around the world can gather and interact, a place where people can create their dreams, and a place where thanking folks for the good they do is just common practice.

The only sad note on the proceedings was the memory of the recent passing of Hyper Mole, noted by our esteemed Editor: Bixyl Shuftan: (http://slnewser.blogspot.com/2012/11/hyper-mole-noted-bay-city-resident-dies.html).

While I could write about this forever, it probably is best that you check out the many pictures that I took at the event. Truly, this was one of the best events I have been to in a long time.  You can still come to the Bay City Fairgrounds (http://maps.secondlife.com/secondlife/North%20Channel/130/134/28) and grab landmarks to the Mole builds on the Mainland, look at some pictures of their builds, and pay homage to Hyper Mole at her memorial. 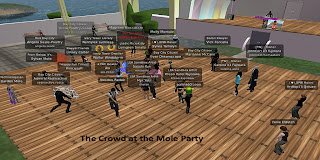 There is a lot of information out on the Internet about the history of the Moles. They were formed from some resident super-builders, and from a group of individuals hired for their building, scripting, texturing, or other skills. Under the supervision of Michael Linden, the Moles have been responsible for the creation of roads, bridges, canals, and other forms of the underpinnings of this beautiful world. The Linden Department of Public Works (LPDW) is deservedly proud of the textures and builds they have added to the grid. If you would like some great, Mole-made freebies, hope a SLurl to the Mole Mart (http://maps.secondlife.com/secondlife/Leafminer/199/142/35). 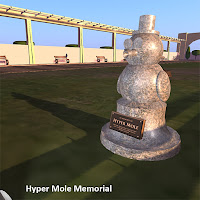 Next time you see a Mole—and they don’t always hide out underground—say hello, and thank them for their contributions to Second Life.