The Super Bowl in Second Life


Every year people throw parties order pizza like mad cheer and shout for an American event every year. No one can deny its place in American culture or in other countries it might be a big party too. But in the digital realm of Second life it was still a major event even on the small screen of your computer monitor. 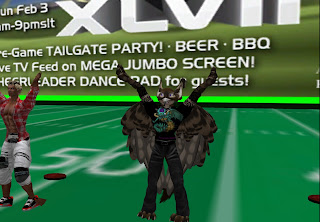 This year the Baltimore Ravens and San Francisco 49ers duked it out for the Vince Lombardi trophy. Watching on the small screen was difficult however. Usually my Exodus viewer plays nice when I watch a movie in Second life (Like Shock’s movie night I reported on earlier). But watching a live event on TV at the Aero Pines Park along with a lot of avatars like myself the TV signal was garbled. A few people complained to Cindy Bolero the owner of the Aero Pines Park which she did not appreciate. Eventually the signal did stabilize and I was able to watch the game and commercials pretty well. However I admit I was part of the problem as my wings and tail was scripted which add to the lag. When Dalton Prock imed me he asked me to remove my lion tail and wings I did and that did help improve the TV signal on my computer.
Cindy Bolero: "Not my fault, and I should not be treated that way after spending over 200 dollars and 20 hours on that party." Cindy also added the reason the webcast wasn't stable was because the whole internet was bogged down by the annual event of pushing the envelope of social networking. Next year Cindy will prep more to withstand the high volume of avatars on her Aero pines sim. But the compliments outnumbered the complaints. People were amazed overall.
I myself had a fun time watching the commercials like I made fun of the "Fast and Furious 6" commercial saying "Fast and Furious 7" will star Cloud avenging the death of Aerith as Fast and Furious and Final Fantasy are the same acronym. I remember the Taco Bell commercial was funny with the elderly pranksters. The go-daddy.com commercial with the model and the go-daddy tech kissing each other provoked awkward feedback.
The game itself was exciting to watch with Ravens scoring touchdowns left and right early in the game while the 49ers having a tough time getting any rhythm or mojo to move the ball for the first half of the game. The halftime show featured Beyoncé with Destiny’s Child and it was fun to watch. The second half of the game was very exciting to watch.
Early in the third quarter half the lights shut down in the Superdome due to a power outage which lasted a ½ hour.  John Harbaugh was enraged by the power outage as he felt as his Ravens were robbed of their drive and game rhythm. He was right as the 49ers’ starting getting their drive into the game and the 49ers answered back with several touchdowns and were within striking range of beating the Ravens score wise.
In the very end the Ravens were backed up against their own goal line and ate up the clock with running plays. They had a slick play of a fake punt with the punter eating up even more time off the clock by scrambling and let himself be pushed out of bounds for a safety. The 49ers had all of 4 seconds left to score 3 points or more to tie or win the game.
In the last 4 seconds 49ers could not convert and the Ravens won 34 to 31.
All in all it was fun watching the Super Bowl on Second Life hearing commentary and cheers for both teams and meeting new people. Second Life is expanding every day meshing with real life events with live singers movies from real life and more. Cindy expanded to the Super Bowl which is big in the US and across the world. Who knows what will come from real life into second life next?
Grease Coakes
Posted by Bixyl Shuftan at 6:00 AM