On Saturday July 6th, the Steelhead community held their annual horse races for the Relay For Life. Every year, the steampunk community holds the event to raise cash for the American Cancer Society. And this year, a number people took part.

The action took place on a platform high above Steelhead Shanghai. People were asked to arrive at 5PM SL time or a little before. Dropping in, there were a few people there, with more coming as time went on. The entry fee for the race was fairly small, a donation of fifty Lindens in the Steelhead Salmon's RFL kiosk. TotalLunar Eclipse, the elven Steelhead co-owner, commented, "This is the first time I've done a race on my own," saying Fuzzball Ortega had some real life matters to attend to, "We'll have a specific 'horse race,' then an all animal race." The third race would be a "free for all" which was open to all, including avatars. Races would be first two races would be two laps. The third would have three. The winners would get trophies created by Lunar. 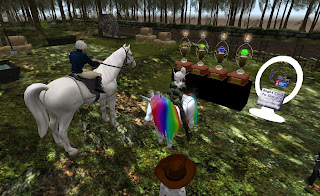 For the first race, the largest mount was a huge white stallion, "Ithax," belonging to Baron Klaus Wulfenbach (klauswulfenbach. outlander). Bringing out his horse, Lunar was greeted with some curious looks and a couple chuckles, a unicorn with a rainbow mane and tail, "He was a gift from Riven. … I'm riding 'Nyan Cat' horse." "I think he's pretty," Softpaw Sommer, a fairy catgirl commented. Her horse also stood out, purple and a little translucent. Garnet Psaltery of Babbage also took part with her horse "Daemon." Garnet stands shorter than the tall Lunar, but her horse was larger than the elven leader's smallish mount, "How funny to be able to look you in the eye, Lunar." Stereo Nacht was lent a horse by Sidonie Ancelin.

A practice run given to those showing up on time had varied results. The Baron's huge stallion proved stubborn. But Stereo's speed got a wide-eyed look from Lunar , "your horse is a bat out of hell." "Danke," the Baron spoke up, "he's from my stables." "She gave it some nitro beforehand," Lunar commented. Sidone grinned, "Isn't he a handsome boy. Pif is a *rocket!*" "I shall need him back," the Baron told her. Sidone protested, "Mine!" 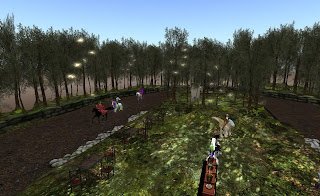 Two more racers came in, Steelhead Jager Liam Richter (aert.odigaunt) with his dark stallion,  and Wraith Serdyuk, whom had been lent another of Baron Wulfenbach's horses, Ekhion. And with them, the racers lined up at the starting line, "3, 2, 1, Go!!" And they took off, with Stero's stallion once again racing down the track. Liam was the other racer strong performer on the first race, but getting off the track, he bumped into a few people. "Zorry for hennyvon Hy ran into," the Jager apologized, "dis guy does nut haff a clean turn." "Well done, Mr. Richter," Stereo told him. "Tenks! Hyu gaff me a goot ron on Illizzuz. He iz a pretty fascht horze!" Tensai called the race a "photo finish," with Liam being declared the winner. 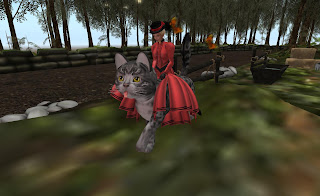 For the second race, Satu Moreau came in with another unusual horse, which Softpaw recognized, "Oh, that's the fire elemental." There was a bit of confusion, with Lunar commenting, "Okay, Wraith gave me a horse called 'Bad Horsie.' I am not trusting this description." Wraith quipped, "I gave you a horse? How did I do that?" Garnet's mount for this race was one of the more unusual ones, a giant cat. The Baron's second try was greeted with more stubbornness from his mount, having some trouble even getting to the starting line at first. Lunar commented, "Well, the Baron's horse is going crazy … " Stereo brought Pif on the track again. Eventually the wild mounts began to cooperate, somewhat, and Tensai ordered the racers to get ready, "Ready Riders! To your Marks!! … 3, 2, 1, Go!!" This time there was some trouble as glitches had a rider or two "fly off" the track. Tensai declared, "Aaaaaannndd … by a paw … Garnet!" The kitty rider was surprised, "I won?? My goodness!" "Well done," Stereo congratulated her. Garnet petted her mount, "Well done, Magnificat. Extra tuna for you."

"Okay, one more race," Tensai reminded everyone, "Anything goes! Cars, horses, kittens, whatever. … ANY vehicle or creature." Nobody brought in a vehicle, though Lunar changed to a pegasus avatar and entered himself. I myself entered with my "Shiave" raptor-like mount. Garnet entered Magnificat again. Satu entered the fire mount for the third race. Liam also entered once again. 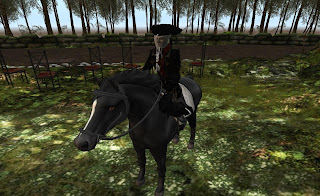 "On the mark … 3, 2, 1, GO!!!" And the racers went off once again. Once again, Liam sped down the track, and as expected, "Hoooo!!! In first place, LIAM!!" But yours truly managed to put in a stronger than expected showing, "In second place … Bixyl!! In third … Garnet!!" "Congratulations riders."

There was a bit of funnery as Sidone grabbed Liam's hat. Liam briefly snarled, but shrugged it off, "De forst plaze trophy, Hy tink, goez to Klaus," saying he was just a jockey. The Baron answered, "Was? Bah! You did the riding. You can put the trophy up in Der Hut, though." "Dot vill vork. … It iz victory for all of Vulfenbach Jaeger, proofing dot horzez is indeedt hyuzeful for more den eatink, or ridink into fight."

The only problem for Liam was he couldn't take home two trophies, so the Third Race trophy went to the second place rider, me. Liam approved anyway and applauded, "Hy chust like ridink horzez … " Getting her trophy, Garnet thanked Lunar, "I'll give it a place of honor." Of his trophy with the red gemstone, Liam asked, "Doez de red part taschte like schtrawberriez?" He then tasted it, with the others chuckling or going "Eww." Liam looked up, "Vot?" 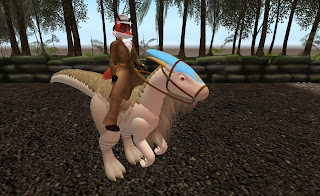 Tensai, after giggling, announced, "Thank you everyone for coming out here today. Please tell others about the upcoming race for more fun! We will announce date and time soon." Lunar also reminded everyone about the festival hunt still going on that weekend.

The fun continued with some people remaining on the track for a while. One bystander changed into another horse av, and began chewing on Satu, "Ack! MY head!" Another horse was brought onto the track to practice, Sephiroth, and Sidonie commented after seeing him rocket down the track, "The Baron will have to go get him."

Once again, the results were:

The races were part of the Steelhead Salmon's RFL festival, which went on until the following day. It would be among the community's last events before the Relay Walk the following weekend.