It was July 20th 1969 that the first Moon Landing took place. Forty-four years later, space enthusiasts in some places took the time to celebrate. One such place was at Second Life's National Space Society, at the sim of the same name. They had planned a building contest, but instead it turned into an afternoon of music and conversation.

To begin with, the National Space Society is an organization that promotes the lasting presence of humans in space, in space stations, and eventually on the Moon and beyond. The organization is divided into smaller chapters, including one here in Second Life. Naturally, it made it's home in the Grid's region of science-oriented sims called the Sci-Lands. 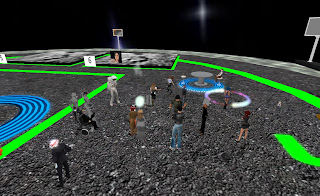 The event took place over 3000 meters over the National Space Society sim. The area was a mock-up of the Lunar surface, next to an Apollo lander. There were a few freebies available, a space suit, a book, and a "Lunar Travellers Kit." Ariel Miranda, Tarali Jie, and Archivist Llewellyn were the NSS members I interacted with the most.

"We planned on holding a building contest," Ariel told me, "but it doesn't look like we gave it enough lead time or publicity. … we didn't get our minimum of 5 entries for our Lunar Robotics Contest by the deadline." Only a few builders had entered, notably Asterion Coen, noted for his builds in Second Life science sims whom was clearly the best one. So the lunar building contest itself was postponed for another time, but the party went on. There was a dance animator, and a selection of space ballads and other Space Age themed songs, including "Fire in the Sky," "Dog on the Moon," "Queen Isabella Where Are You Now?" and the Sputnik song "Surprise" from 2007.

Remember the fifties, those fat complacent days,
when the future seemed a century away?
Then up went Sputnik,
gave the world a butt-kick,
and made it clear tomorrow starts today.

Beep beep, beep beep, hello there!
Sputnik sails giggling through the sky,
Red Flags, red faces, jump in the race,
as the Space Age begins with a surprise. 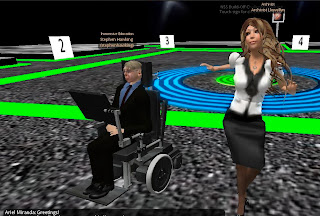 Attendance was small when I first got there, but as time went on, more showed up. This included a few new residents whom had just arrived on the Grid. There was also Gentle Heron of Virtual Ability, and Musician OhMy Kidd. There were also a couple residents named after real life celebrities. There was a "Walters Cronkite," whom bore some resemblance to the famous CBS reporter. There was also a "Stephan Hawking" avatar whom was a good match right down to the computerized voice. He contacted me in IM, saying he had been in SL for several years under another account, and had spent a few hours getting the avatar right. He later commented out loud, "If Stephen Hawking really did come to Second Life, would he do so in an avatar with his name?"

There was quite a bit of science-related talk, notably space science. This included Pluto's "demotion" from planet status a few years ago, when humans would return to the moon, having a moon base with rocket launcher capability, space elevators, Apollo 13, the Voyager probes, "Did you all know that the majority of Voyager data has still not been actually looked at?"

It was also brought up that this was the first Moon Landing anniversary since Neil Armstrong had passed away. "What is also sad is that we still aren't back to the Moon," Ariel commented, "and it looks pretty certain we won't be until well after the passing of all of the original moonwalkers. It was also brought up there was a bill in the US Congress to designate Tranquility Base as a national park. There was some debate as to how practical a move it was, but everyone agreed about the intentions, the preservation of a historic spot.

At one point Asheron razzed one of his lunar vehicle concepts, and drove it around.  He would later put down some markers for the future building contest. 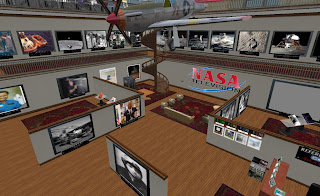 The Moon Landing Anniversary party was near the NSS Library. "Through the door to the Archives is a very large NASA archive / museum," Ariel told me, pointing to a doorway out of the party area. Archivist and I talked about it for a while. The NSS chapter in Second Life was started by Rocket Sellers in Dec 2007. As for the library, "The library started, sort of, when I came into SL in Nov 2008. It started as a smaller library. Then I wrote a proposal to NASA using that small exhibit based on women in space, to be expanded. They gave me land on CoLab Island, which was run and administered by NASA JPL (Jet Propulsion Labatories). That was … 2009, a few months later, when the library became (what) you see today. CoLab island closed in 2011, and the library was relocated here on NSS Island."

Of the library's contents, "The second floor of the library has the second floor dedicated to the first moon landing. It is told in a chronological order from Sputnik, to crew selection, to liftoff, landing of the Eagle, science experiments on the moon, and return to Earth with a tickertape parade. The exhibit on the second floor was inspired by the real-life Armstrong Air & Space Museum in Wapakoneta, Ohio.  I used to work at that museum assisting with educational projects and giving tours. … The Apollo 11 exhibit was inspired by the museum and it's layout. I learned which images were most important, why, and to create an exhibit layout that told a story in chronological order.  Because the museum gift shop in real life sold post cards that were popular images and also because the museum layout was also chronological."

Archivist went on, "We sometimes have special exhibits in addition to the permanent exhibits. For example, we have had exhibits on the Hubble Space Telescope, Mars, and CERN's LHC." There had also been some interesting events over the years, such as "Send Your Face to Space. That one was to take a photo of your avatar and upload it to a NASA site, and it was carried on the last two space shuttle missions" on a microchip. She had met one of the astronauts from the last shuttle mission, and was able to shake his hand, "He recognized me from my photo on FB and talked to me for a bit." 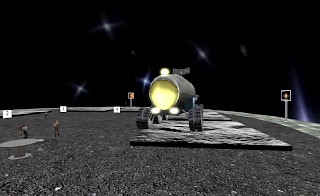 As it turned out, Archivist, or Shannon Bohle as she's known in real life, was at the Armstrong Air and Space Museum earlier that day, "hat an enjoyable afternoon, despite the rain delay, at the Summer Moon Festival at the Armstrong Air & Space Museum. It was a great pleasure to meet Astronaut Greg H Johnson and hear his "Astronaut Tour" talk at 4 PM. My talk on the Curiosity Rover followed his, around 5 PM. (Actually I was a somewhat last minute fill-in speaker after General Joseph Lanni cancelled). While not the focus of my talk, I mentioned a little about Curiosity's AI capabilities and some of my background in AI --including winning 2nd place in my category in a DoD-sponsored international Artificial Intelligence contest advertised by The White House, the theme being a simulated 3D Mars environment including NASA's satellites and rovers such as the Curiosity MSL rover. After my talk, the audience went outside to see and drive a scale model of the Curiosity rover."

Archivist had slides from Second Life in her presentation at the Armstrong museum (link).  She had planned to stream the talk in to Second Life, but there were connection problems. One can find articles written by her in the SciLogs blog (link ).

Ariel explained they were at the Second Life Birthday, "We had an exhibit at SL10B that we had fun with. (smile) … We really got very lucky by being on the least laggy sim of the event." Asterion,  who was also at the SL10B, commented, "Yeah, all visitors went to (the) NSS plot and not in mine! I was thinking to send one of my rockets  there, but it failed at launching." Archivist also has an entry in the VWBPE conference about real-life/Second Life journalism.

On a final note, Second Life has been the scene of some impressive Moon Landing builds. One is the Saturn V rocket at the International Space Museum in Spaceport Alpha. On the fifty year anniversary in 2009, there was a flyable SaturnV that launched every half hour that took any pilots aboard into orbit (link).