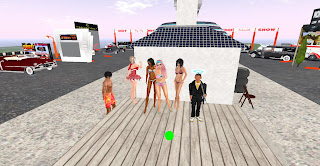 ”Welcome to Hot Bay City Nights on the Fairgrounds here in beautiful North Channel. I'm your Master of Ceremonies.” Pygar Bu shouted to the crowd that had gathered for the Miss Bay City bikini contest. 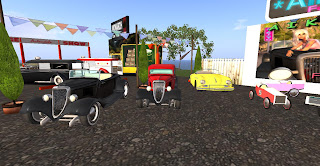 This is the second year of their Hot Bay City Nights featuring vintage and retro cars on the fairgrounds from  24th through the 31st of August. Go see terrific cars  from several motor companies. There will be events all week long including  two more car washes, one on Wednesday 6-8pm SL time and next Saturday at 2-4.  The proceeds go to Child's Play charity. http://childsplaycharity.org/ 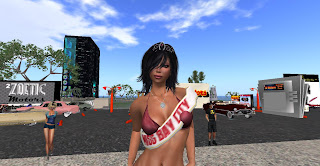 Saturday,  I was able to attend the beauty contest which was great fun. There were five entries including one male competing to be Miss Bay City. They all sauntered down the runway one by one.  Pygar asked each a few questions while the audience applauded and chatted while the judges looked on and made notes . There were some tense moments as we all awaited the results.

Miss Bay City will represent Bay City at as many events held there as possible and ride in the annual parade. Her  prize is  an elegant lavender pink convertible donated by  ADudeNamed Anthony. The 2012 Miss Bay City, Angela Seale-Poultry (angela.seale) took to the runway for the last time as an appreciative crowd applauded her service for the past year. Finally Sylvia Tamalyn was announced to be the Miss Bay City 2013.

The closing party will take place September 1 , 3-7 SL time. Take a trip over to view the cars and pick up some freebies along the way. http://maps.secondlife.com/secondlife/North%20Channel/105/128/29

Editor's Note:  Check out an interview of Angela Seale at the Poultry Report (Click Here).
Posted by Bixyl Shuftan at 6:00 AM