Amehana Ishtari a good friend of mine wanted to hold a writing social party for her friends to chat about writing and reading. She asked me to DJ for the event I said sure. She has does readings for me many times and given me support and hints to publish my children’s story. 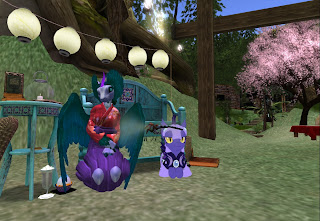 It started at 6pm SLT but I showed up early at the party at http://maps.secondlife.com/secondlife/Nemmers/85/54/30 to pick out songs and give Amehana the stream. Me and her chit chatted about writing and how art teachers can nitpick their elementary school students for drawing violent images like killer robots or have a student draw a teacher they may not like face a horrible death. We both agreed that it’s better for a child to draw about their fantasy of doom for an adult he or she may not like then acting it out.

Amehana’s friends showed up like Ally and Oscelot to hang and chat too. Raimi showed up too as she’s a good friend of mine and a fan of my music. I asked Amehana about the audio book I won through her drawing called “Call of the kami.” She had this to say about it, "yes it is, and mythology and folklore. That book happened as a result of researching Japanese spiritual views for Dragon Shaman (and my own growth)."

Amehana called herself a crazy lady by asking people what they about the folklore. I told her "nahh" she’s not a crazy lady. But her boyfriend Vadise Reikaz had this to say, "Yes, crazy lady." (grin)

I also play MLP/fallout with Vadise so I asked him about the mutant we fought last night. He seemed upset that my character Dusty did so much damage with my battle rifle as he wanted to try out Xinka’s gun. I told Vadise next time I’m going to melee attack with Dusty and not shoot. 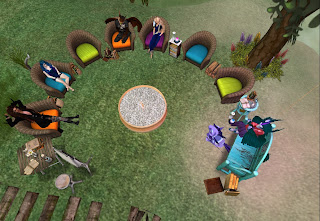 One of the projects Amehana was working on was the Dragon Beads anthology as a contest for anyone to submit a story about dragons. I asked what it was about and Amehana said, "Dragons (laughter)."

The best entry that Amehana has seen so far was a story about the daughter of a dragonrider who thwarts an invasion of raiders. The first prize is $20 I said that’s still a good prize so she shouldn’t feel bad about that. I also ordered Amehana’s first book called “Dragon Shaman Book One Taming the Blowing Wind.” I’m almost finished and it’s a good read. It’s a good mix of romance and fantasy where blowing wind wanders into the spiritual realm and finds an adventure and a spirit who loves her who she resists. One part was funny, but I won’t say what as. It was also creepy.

There’s a sequel to "Taming the Blowing Wind," is named book two of Dragon Shaman is "The Smoky Mirror." Amehana hopes to write 8 in all but she also has another writing project called the selkie skins which she gives the credit for the inspiration to Vadise her boyfriend. Vadise asked for a character idea through a Harry Potter, so Amehana created Christy as a selkie from then on she has her own series with a -.- face. She’s been writing the series about shape shifters who change from human to the animal form of a seal. Amehana gave me a writing sample and it looked like good writing just like her blowing wind book.

For a while Vadise, Amehana, Vera and I goofed around as I asked questions about her book series. Writing is an excellent way to express yourself for any kind of genre or fantasy universe that comes to your mind. Or the flip side is true that you could read about an adventure from your fave author. Amehana aka Teresa Garcia is certainly a good author, or perhaps you already have a fave book or fave book series. Ethier way ,have fun by reading or writing or perhaps both. After all you are reading when you read this article about a party about reading and writing.