The Steelhead community in Second Life is the source of many weird happenings. While many are caused by the mad scientists among it's residents, others are not as the place itself seems to attract oddness. On Friday Sept 6 came another strange event when a number of waterspouts, to those who don't know a tornado in open water, appeared at Steelhead Shanghai. What made it truly odd was that there were electric sparks coming from some of the waterspouts, in addition to sharks seen flying around in them. The locals promptly christened the event a "Sharknado." 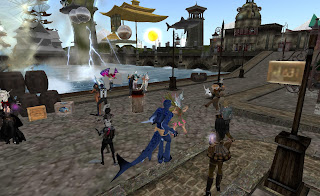 So what did the Steelheaders do? This group of wacky humans, elves, weres, furs, and other folk did what they so often do in the face of weirdness: throw a party. And faster than one can say "da-dum, da-dum," people began arriving at the harbor's docks.

DJ Fuzzball Ortega, normally the town's sherif, was the DJ for the party. The pointy-eared were had managed to squeeze himself in a scuba outfit, with his charming partner Eugene in a bikini. They had on just two of the many costumes at the event, which including old-time diving outfits, shark costumes, shark hats, and more swimsuits, "I love Ma's get up, hehehe!" And of course the pet sharks from the 7Seas fishing game. 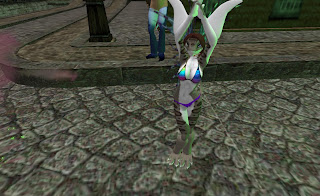 Besides the sharks flying around in the air, a couple "landwalker" sharks joined the party, "Watch out for the land shark!" But these "landsharks" weren't there to chow down on the Steelheaders, or look for bargain real estate. They were there to enjoy the music and dance along with everyone else. And with the sharkgirl fitting her bikini just nicely, no one seemed to mind.

At one point, chainsaws were passed around, "helpful if it starts raining sharks." "I knew investing in power tools would be useful someday." By accident, one was passed to one of the landwalkers by accident, "Thanks! This'll make chopping up the tuna a *lot* easier. … When you have a shark's body designed for a big brain and opposeable thumbs, well, your jaws aren't gonna be as strong." 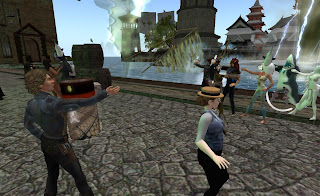 At another point, Lelani took a gun of some kind to the flying fish, "Don't be alarmed, people, just taking a practice shot at some silly old sharks." She got a few curious looks, "alarmed of guns in Steelhead?" One of the landwalkers remarked, "Just don't shoot me. I came for tuna, not 'long pig.' " Someone else mentioned the possibility of a Telsa gun seen on "Facebook" as a weapon against the sharks. Another just remarked, "Hey, you wth the gun! Less QQ, more pew-pew." A third cautioned, "You shoot enough sharks and it will be phew-phew!"

Some of the women's swimsuits were more revealing than usual for Steelhead, "Okay Lumi, that's oddly hot, and not at all 'G' rated." The neko girl just giggled, "hee-hee-hee, thats me, accidentally perverted." Someone else remarked, "Who needs stinkin' G ratings on 'Sharknado!' night?"

Fuzzball's tip jar got a number of donations, "Thank you … Now I can bribe SyFy NOT to make a sequel." One of the landwalker sharks suggested, "maybe we in Second Life can make a better shark movie." Steelhead co-owner TotalLunar Eclipse suggested, "We should recreate some of the movies on MST3K." There were a few jokes about bringing back Saturday Night Live's "Landshark," "knock-knock. Candygram!" And there were other ideas for B-rated flicks, "Shark Bait II - Fishing Chums." 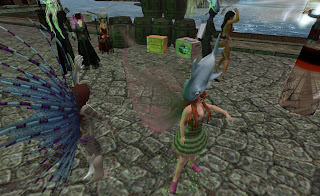 With all the sharks flying around, someone wondered about "shark poop" falling from the sky. One landwalker commented, "Don't look at me, I used the outhouse before coming here." There were a few jokes about a "sh**storm," and "where's the fan?" And of course, "jumping the shark."

Eventually, the party came to a close. Unfortunetly for Steelhead Shanghai, this event for the location would be it's last. While no Steelheaders were killed or seriously injured, the structures suffered serious damage. With Steelhead's city funds running low, it was decided to level the ruined buildings and close the sim. And so Steelhead's Chinatown area was no more. While only a few residents had to move, the community was sad to see the place go. Willow Leafstorm wrote a poem in tribute:

'Tis a day that is sad for all good things must come to an end.
We say farewell to a land that was a home and to some and a friend.
Tonight we dance and and make merry for old Shanghai,
Auf wiedersehen. Au revoir, sayonara , ciao, zài jiàn and goodbye

A few pictures of Steelhead Shanghai can be found in Eladrienne Laval's blog.

Steelhead doesn't usually mourn for long, so chances are instead of the event being known as the end of Steelhead Shanghai, it'll be known fondly as the "Sharknado."

"Thank you all for sharing your sharks."