Wildroses Pevensey On The Veterans' Tribute

Almost forgotten in the midst of the attacks on Paris, in the Thundering Falls sim, this year's Second Life Veterans' Tribute stood until Saturday November 14 before presumably being taken down the next day.
In the early evening of Veterans' Day November 11, I dropped over to check the place, and it was crowded with both people checking the wall and dancing at the set up music stage. Greeting people near the landing craft where people appeared in the sim was Wildroses Pevensey, one of the team behing the Tribute. 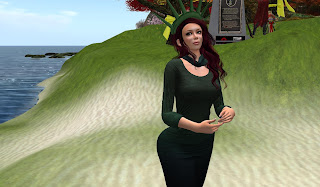 "So what can you say about this year's Tribute?" I asked Wildroses. Her answer, "Uhmm.. overwhelming?" She then smiled, "I would not know where to start. It turned into something bigger than I ever expected or dreamed this year." She gestured to the memorial wall, made up of bricks with names of veterans of wars from the American Revolution to today, "I lost count of how many blocks I have added, but I do know that the top two rows are all new all the way around, and this section is almost already full." 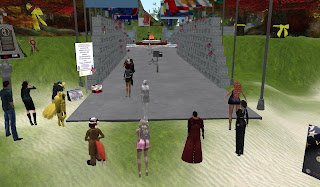 I brought up saying I had been checking to see if the block representing a friend of a friend was still up. Wildroses smiled, "You know they always will be. Same spot too. The wall may grow 'up' but they will always be there in that spot." Of the number of people whom had entered the sim that day, "I can tell you my counter is broken. (smiles) It is saying 864. I know we have had more people than it says."

She paused for a few moments, then apologized with a smile, "Sorry, I am sooo wiped! This has just been honestly overwhelming this year, in a good way. But it is just sooooo much work. It just exploded." "How long have you been out here?" I asked her. She checked the time, "Since 5 this morning." "That's quite a while." "But I have made sure every block has been added. I will sleep in tomorrow for sure... I am going to close down the 'build' part of it over night due to overwhelming traffic, but still take submissions." 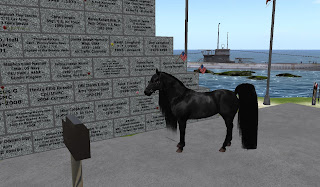 Of how long the exhibit would be up, Wildroses told me, "I think I have the (quarter) sim till the 14th, then it will be put to rest again. (smile)"  "Anything happening until then?" I asked. "No, today (November 11) is the only day we plan (for). We have one more entertainer ... tonight, and then its just hopefully much calmer. Give everyone a chance to wind down after Veterans Day. (smiles)"

"The Tribute's been up every year for several," I reminded, "When it first when up, what were your plans?" Wildroses thought for a moment, "Hmm..... The goal of the Tribute has not ever changed over the years, it has always been to pay tribute to our veterans past and present, allowing everyone a chance to put loved ones on the wall.. a way to remember. 'The Tribute itself is non-political serving one purpose to honor all those  that have given willing of their time to protect the lives we enjoy today,' to quote our founding statement." She smiled. 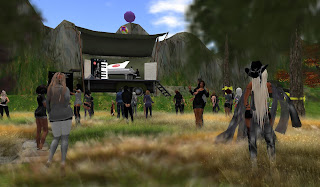 Wildroses did mention one complication, "Over the years the people running it have dwindled," she smiled, "but you know I am the curator of the wall... so I make sure it comes out every year. If nothing else were here on the land, the wall would still stand." "Suppose someone expresses interest in helping out next year?" I asked.   Wildroses answered, "I think, as long as its not 'over commercialized,' (if that makes sense) and people wanted to help, Iwould welcome it." She smiled, "Jill MacKenzie did step up and offered to take over and plan for entertainment this year, and got all the wonderful live entertainment." "Nice. (smile)"

"So what are your plans for next year, so far?" I asked. Wildroses answered," Surviving this year first?" She smiled, then laughed, "I do believe next year though we are starting to out grow the (quarter) sim." "So it's likely to be larger?" I am not sure yet?" she laughed a little more, "with help there is a possibility."

Posted by Bixyl Shuftan at 6:30 AM