"Homes For Our Troops" Bennefits Raise Over $1000 Dollars

In Second Life, the veterans' charity "Homes Four Our Troops," which helps those who once served in the American Armed Forces whom have fallen on hard times by building them homes, is perhaps best known for it's monthly charity at Veterans Isle, organized by musician Frets Nirvana. But last month, it was joined by a second fundraiser. This one was organized by Blaze Teardrop. 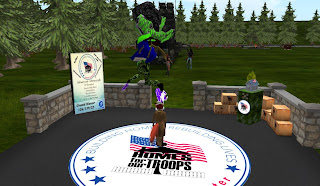 Blaze, a member of the California National Guard in real-life, was the owner of Alpha Labs in Second Life. With Crowe Blackheart and Simplerosey Resident helping him with the event, He rented some land in the Grand Manor sim, set up a stage, and made a call for builders to put up some wares to sell for the charity. Linden Labs heard about his event, and made an announcement in the official Second Life Blog. The event began Sunday February 21, and lasted a week to Monday February 29. The area had live music events most  of the days it was open, the schedule saying Frets himself was part of line line up. Second Life Newser was also informed that Frets also provided the kiosks for the Grand Manor event. 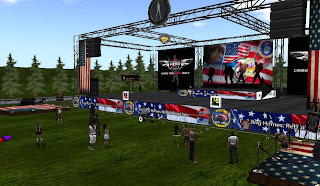 I had a few words with Blaze following the event, which he stated "went very well." He went on to say over thirty designers had taken part in the event, putting up items for sale, with proceeds going to the charity. He didn't say how much was raised, as he was "waiting for an accurate count from HFOT." But he did say he and his team were planning another event this summer, "We're gonna have another even July 2-10. ... We are going to schedule a meeting for all our staff to talk about what we did right and wrong and what we can do better. So we are better prepared for our next event." He thanked Crowe, Simplerosey, and the others involved, "I just want all my staff to get credit because I wouldn't have been able to do this event without there help and support."

I dropped by just after the event ended to see it the finally tally in the kiosks was available, but the owners of the sim had already reclaimed the land. So the kiosks were not available to view. 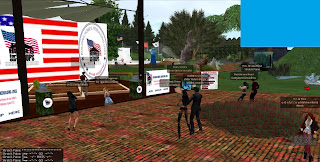 On Sunday February 28, Veterans Isle held their monthly benefit concert as scheduled, from 5PM SL time to 9PM (Midnight EST). Besides Frets, Lyndon Heart, Zak Claxton and Shaye Dezno also took part. Donations were generous, especially in the final hour, the total being 155,400 Lindens raised once Frets stepped down from the stage.

A few days later, Frets made an announcement, concerning not just his event, but both of the fundraisers. 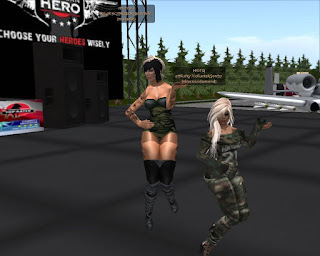 I am once again proud to announce the results for our efforts in Second Life for Homes ForOur Troops.  For February we will be sending HFOT over $1050 because of the efforts of many people in Second Life.  A big thank you goes to Blaze Teardrop and all the folks at Grand Manor.  The special event they sponsored in late February really increased our donations.

Additionally all the great artists at our monthly benefit at Veterans Isle did a fantasticjob.  Thank you Lyndon Heart, Zak Claxton and Shaye Dezno Jonstone for donating yourservices and providing great performances that inspired our donors.  And the consistentsupport from Checkers Firelight, Jardasius Ecksol, Dahlea Milena, Bri Mcmahon, GjackieWinkler, Victoreeia and Graywolf2030 are what keeps our efforts for severely woundedveterans on target!  Let's keep this effort rolling!

It is a pleasure and an honor to be a part of this project. Our extremely wounded veterans deserve it.

The next benefit at Veterans Isle should be on March 27, starting at 5PM SL time.

ABOUT HOMES FOR OUR TROOPS  - HFOT builds homes as a departure point for Veterans to rebuild their lives, and once again become highly productive members of society. Despite their life-altering injuries, many Veterans have embarked on new careers, completed their college degrees, or started families. Empowered by the freedom a mortgage-free and specially adapted home brings, these Veterans can now focus on their recovery and return to their life’s work of serving others. Many have embraced their roles as motivational speakers, sharing their messages of persevering through tragedy with groups and classrooms around the country; others take to a national platform to promote awareness of veteran suicide, homelessness and PTSD. Their incredible stories are the driving force for the work for HFOT.

To learn more about the Homes For Our Troops visit https://www.hfotusa.org.