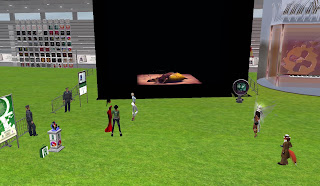 A year and a half ago was quite a time for ALS (Amyotrophic Lateral Sclerosis aka Lou Gehrig's Disease) charities with the "Ice Bucket Challenge," which made it's way into Second Life. Since then, attention to ALS has cooled down some. But the quest for funds for research continues.

On Sunday February 21 at 2PM SL time, a fundraiser event began at the Sandstorm sim, with proceeds going to an Italian ALS charity,  AISLA Onlus. There were a few art items up for auction, but the one getting the most attention was an exhibit by noted Second Life artist Bryn Oh. Later that day, I would drop in to check on how things were progressing. 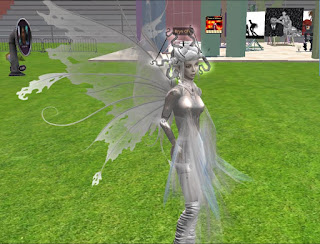 "I was here for the opening," spoke resident Mona Eberhardt, "There were 97 or so people in here. ... Biggest crowd I've ever seen in a single sim, Bixyl. I nearly burned my laptop just standing here."

Bryn Oh happened to be around when I was there, "Sorry I could not be here for the opening." She told me the sim's lasting theme was art, not just for events, and this event took place every year. She thought while there were about 100 people here at the same time during parts, she thought about 400 people in total attended.

Attention soon went to her exhibit, a songbird caught in a string to the point it had been immobilized in a string, which she felt symbolized what ALS does to the body. It gets more and more trapped until eventually all is taken from it. 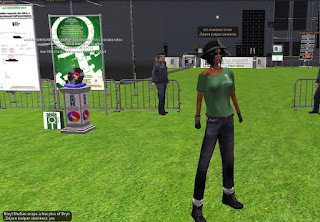 Sniper Siemens, the head of the group, had a few things to say, "The ALS Awareness Music Festival is a special event ... important for the spread and awareness  of ALS." She told me the event was "for our dear friend Harvey. He always had a rabbit avatar. For this reason in our logo is a rabbit. Harvey was in this way until the last day in Second Life, and always smiling. ... Harvey died in October 2014, (our) group (was) founded in November 2014, (and) February 2015 the first Memorial Festival. And now the second. This has become an annual project, fundraising continues every day in our land." Of Bryn Oh's work, "Wonderful artwork and very significant for her. "

Checking back a few days later, the kiosks collecting donations had raised a total of 286,000 Lindens. This included a top bid of 25,000 Lindens for Bryn Oh's exhibit.

While not quite generating the buzz of the Ice Bucket Challenge, Sniper and Bryn's event gets ALS research closer to a cure.