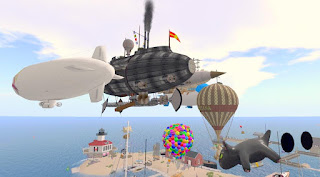 Tradewinds Yacht Club is hosting a colorful and festive airship show at its location on Dex (182,28,25).  The show began April 30 and runs through May 15.  When I stopped by earlier this week there were over 30 airships on display.   The airships belong to both members and non-members of Tradewinds Yacht Club.

The display has been curated by Ahab Quandry, the club’s Harbour Master.  He told me TYC hosts shows on different themes.  He believes this is the third time that airships have been featured. 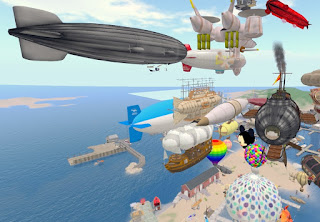 The show includes a wide variety of airships, balloons, and dirigibles.  Some are cute and funny while others are serious, lethal flying machines.  “There are one or two of the same type,” Quandry said, “but I decided that their exterior patterns were so good that it made a difference.  For most shows we try to ensure that there is only one copy of each type.  But when someone has gone to such trouble to make a huge difference to the look, then it is difficult to turn them away.”

Quandry diplomatically declined to tell me if he had a favorite.   When I asked if he had one on display, he explained that he had “a little comical one” but it isn’t on display now.  “When I left the sim,” he said  laughing, ”it disappeared.  It seems it does not like its owner leaving it alone.” 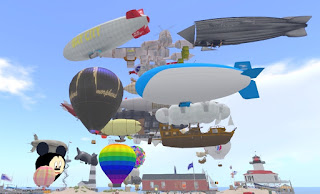 The show is interesting and festive.  Additional space may be available, and residents interested in displaying their airship should contact Ahab Quandry.