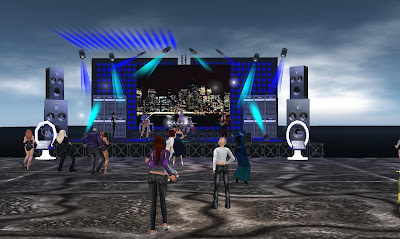 Last Friday May 6, Billy Stevenson (Billy Ixito) and his Country Rebels band did a Garth Brooks Tribute concert for the Relay for Life in Second Life. They performed 3000 meters above the OD Designs sim. They money raised was for Team Harmony of Hope. 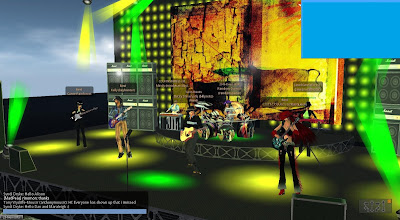 Random Darrow was with the band on stage as the drummer as they performed a number of the country musician's songs. 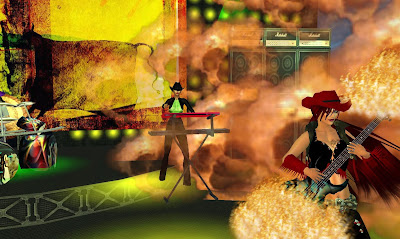 At one point, the stage was aflame as a pyrotechnical display of flames went up around the musicians, "Wait! I forgot my fire extinguisher!!!" "Burn it down!" "Ahh the smell of burned hair." "Once I set my beard on fire pretty good. That was a pretty ugly scene." 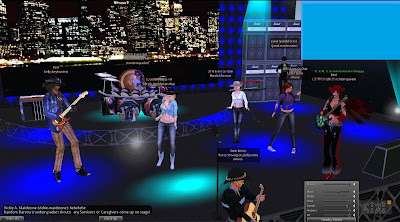 Several thousand Lindens had been raised at the concert. At the end, the band called for the survivors and caregivers in the crowd to come on stage, Billy saying, "ON BEHALF OF ALL THE COUNTRY REBELS  AND MYSELF WE HOPE WE PAINTED A PICTURE OF CANCER!" Over six thousand Lindens were raised for Team Harmony of Hope that night, "Thank you everyone for your awesome donations. Every Linden counts!" 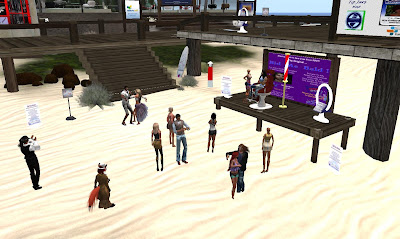 On Wednesday May 11 at 4:30 PM, the "Bid Me Bald" for the week at Arinultra Cay Beach for the Relay Rockers took place. This time, it was Nevar Lobo whom would be putting his curly locks on the line. With his hair longer than some ladies, it would be a more drastic change than for most other males (except perhaps for furs), "Wow - some nice hair Nevar." "That's a lot of hair." 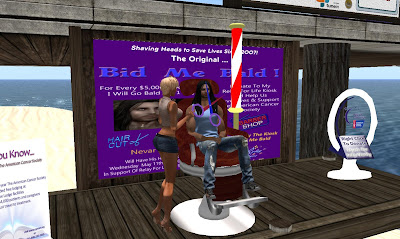 To Nevar's surprise, real or feigned, it was Jill Mackenzie whom was handed the scissors, "Oh my God! NOT JILL!!" Jill took the instrument of hair removal with laughter, "Hahahaha! Payback. You are so in for it now." "Oh damn, I know." "Remember all those insults Nev? And all those snide off hand comments?" "Lord have mercy." People dropping in suggested there might be a little history between them, "Oh em gee, they gave Jill (the) scissors??" "There are fresh packs of sutures in the kit Jill." "I only had a few drinks they are not so bad,"

And so Trader began playing the "Hair" song, though it was suggested "When You Get a Haircut" by Ray Stevens would be better due to the first being associated with Fuzzball Ortega's massive wig worn at some Relay events. Then Jill grabbed at a chunk of Nevar's hair and began hacking away with the scissors, "HEY!!! CAREFUL WITH THOSE SCISSORS! MIKA, HELP MEEEE !!!!!" Jill grinned devilishly, "Oooo, I so love Karma." "SOMEONE SAVE THE HAIR!!! PLEASEEEEEEEEEEEEEEEE!!! .... Oh gosh why did I sign up for this?" 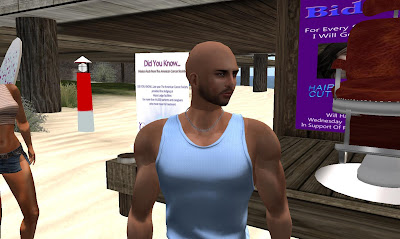 After some minutes of Jill hacking away, she finished the job with a rusty Bic razor and a bit of wax, "Now I need a polishing cloth. ... Polish that egg up," Nevar rubbed his now hairless scalp, "Oh Lord have mercy! I need sun screen quick!" People whom were egging Jill on tried to cheer up Nevar, "Not just any head would look that good bald." "Bald is sexy." "Looks good." One begged to differ, "Nevar! You aged about two years!"

The event raised 50,501 Lindens for the Relay Rockers, and so under the terms of the "Bid Me," with him agreeing for a day for every 5,000 raised, rounded up, Nevar will be sporting a chrome dome for eleven days.