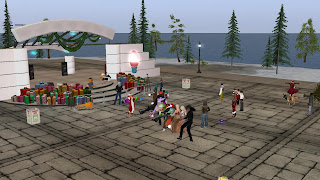 On Saturday December 3, Bay City held it's annual Tree Lighting party. The event ran from 1 to 4PM SL time in the Bay City Fairgrounds in the North Channel sim. For locals and visitors alike, it was a chance to have a little Christmas fun, and perhaps donate a little to charity.

For the first hour, the music was provided by DJ Gospeed Racer. About the time I arrived was when Christov Kohnke was singing while playing his guitar. Third was Zachh Cale, who did his singing while his fingers went across his electronic keyboard. Next to the stage where they played were a bunch of Christmas presents, whixh prompted someone to joke,"Are all those presents on the stage for ME?" 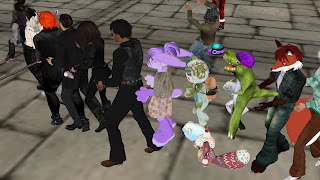 While some people just danced where they stood or with a partner, "Joining in with the cool guy dance." "(laughter) or the sad dad dance," most went into the circular conga line, which has been a part of most Bay City parties in the Fairgrounds, going around and around. Even April Linden, whom has been dropping by Bay City events for a while, got into the act. "Christmas is my favorite time of year in SL each year," the furry Linden told everyone. Someone was dancing while having their pet sheep still at their side. "Why wouldn't there be a bunch of sheep in the conga line?" April mused when others brought it up. Other personalities showing up included Kenny Luckless and Pygar Bu.

There also a newcomer to Second Life in the audience, "This is my friend Foomf," Kain Scalia (Maus Merryjest) told me, "I finally corrupted hi-er, convinced him to join Second Life today." Foomf commented, "Yes, it's all Mausie's fault." Kain retorted, "It is *always my fault*." Not everyone was dancing. One upright chimpanzee dressed in a Christmas outfit had a tree over his shoulder, "I'm really impressed you've been able to carry that tree around for the last couple of hours," he was told. 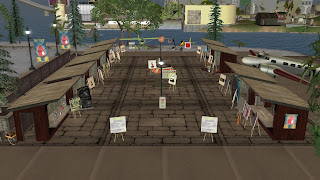 There were a couple kiosks on stage to dontate to the Child's Play charity, "Please take the time to donate to the kiosks either side of the stage - Bay City is raising funds for Child's Play - a charity who provide toys and games to children in hospitals and shelters - a wonderful charity indeed." When Zachh was playing, a friend of his pointed out to the crowd, "You may notice too that Zachh does NOT have a tip board out - he has asked that you donate to the charity please."

Besides the party, there was also a "silent auction," with a number of items up for bid. (www.childsplaycharity.org). "I think Anthony is just shocked by the bidding on the train," Marianne Mccann, mused. One guy responded, "I like the train.  I like trains in general." The auction was already over 49,000 Lindens when I arrived. 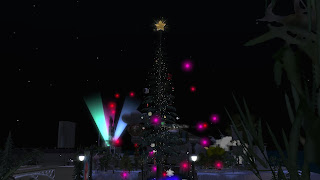 Eventually, it was time for the main event, Marianne McCann announcing, "Who's ready to see the tree light up?" And a number of people answered yes. And so the lights on the tree as well as the star lit up, with a few fireworks going off. Besides the lights, there were a number of ornaments on it, Marianne saying, "(the) ornaments were all donated by Bay City residents." One resident mused, "I somehow expected a fire." Someone else joked back, "That's Burning Man Christmas you are thinking about." 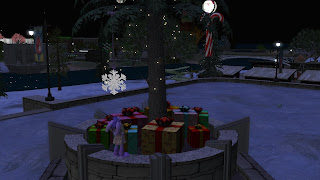 When the event ended at 4PM, so did the Silent Auction, which raised thousands. Among the items was a "Singularity of Kumiko arcade game" sold to Artistik Oluja with a final bid of 10,000L. Marianne announced that the Childs' Play kiosks would be staying up for further donations.

And so, the Bay City Tree Lighting was over. But it won't be much longer until the next big party here. On New Years Eve, Bay City has their annual "Prim Drop," when a giant prim goes down a pole at one minute to Midnight.