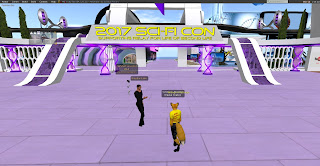 Most people in second life know that Relay For Life is a huge force in the grid as many teams compete to raise lindens to turn into real money to fight against cancer in the real world. Second in itself is a virtual experience with a sci-fi theme. Log in into a world where anything is possible from creating a fantasy or sci-fi environment. Also you can meet people from around the globe whether in your own country or somewhere else in the globe. So Second Life is an excellent medium to present a sci-fi convention which is subtitled passport to Hope.

The 2017 Sci-Fi Convention is held at Forty Two (103/124/23) and you learn about it here https://slscificonvention.wordpress.com/. From March 24th until April 2nd this year you can stop by and have a galaxy of fun with vendors, DJs, and events. I was surprised to find a Klingon city that was empty (I guess the Klingons killed everyone and went back to Kronos). And also I was surprised when I found  Jadziyah Resident’s shop which had rockets from Tintin the European comic. I couldn’t help it but to buy the rocket where Tintin flew to the moon in one  of his adventures. 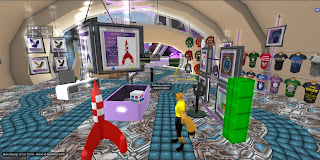 The sim was spilt up into earth,fire,water,air,life, and equilibrium as themes. All throughout the convention I saw lots of exciting things such as a RP area based on Star Trek. Also a theater which had real life photos of actors and a special actress that passed away recently. It showed actors such as Alan Rickman who played Snape in the Harry Potter movies. Also Carrie Fisher who was princess Leia in the Star Wars movies. Inside was a stargate from the Stargate movie and a huge Doctor who display. 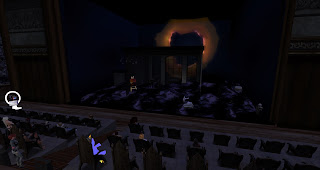 At 3pm SLT I found a theater play called “The Lucid Journey.” Where a woman’s husband named Lewis Liddell is presumed dead. His wife still alive to take a journey in a dreamscape and beyond to find him. The character’s dialogue was in green text as the avatars were on stage. It was great to watch. There’s also scheduled events and a dj here and there. I saw lots of vendors selling Star Trek goodies and a few Star Wars vendors selling lite sabers.

I grabbed Ariadne Fall, who was one of the people in charge of the convention, and asked her what her thoughts were about the sci-fi convention and she had this to say, "It's wacky and fun, exhibitors form all over the grid, and events every single day....  it's proof of what pixel people can do when they believe in something. We love sci-fi and we hate cancer.  It's that simple."

I asked her, "What's your fave sci-fi movie, book series, whatever?" Ariadne told me, "Ooohhhhh, good question!  'Biting The Sun' by Tanith Lee for favorite sci-for book. ...and favorite movie is a choice I cannot possibly make... if 'Earth Girls Are Easy,' 'Evolution,' 'Demolition Man' are on, I watch!"

One of the things people hope for in the future is that the human race destroys cancer. We always look for a future such as star trek where racism is a thing of the past and equality for all is what people strive for. The sci-fi convention here in second life is one cosmic leap in that direction.