The Relay For Life Season Kickoff 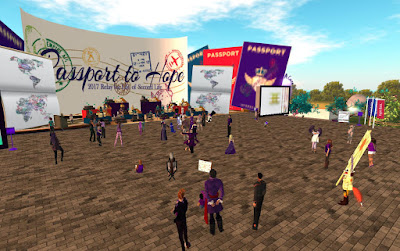 On Sunday March 5 at 10 AM SL time, the Relay for Life's official fundraising season had it's Kickoff event. The first events had actually been the day before when "Paint Second Life Purple" had started, so this made for a little confusion as too which was the official start. But this being the "Kickoff," this was. 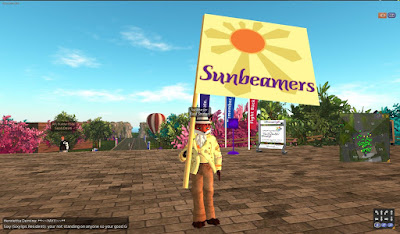 This year's theme was "Passport to Hope." a reminder that the struggle against cancer is an international one. Yours truly was there representing his community's team: the Sunbeamers. 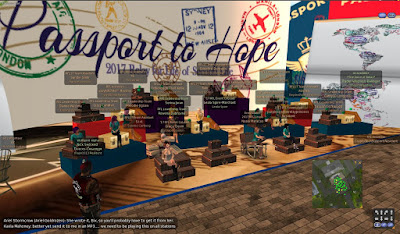 Speaking to the crowd was the Relay Committee. 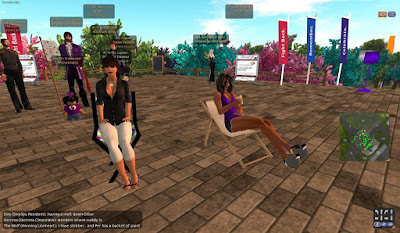 Some were a little more relaxed than others. 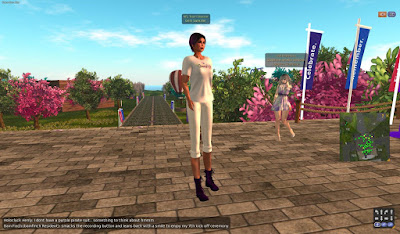 Gem Sunkiller was a bit "Stilted" from a glitch. 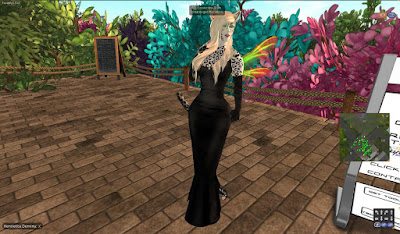 IshtarAngel, Micheline, one of the photographers of the event. 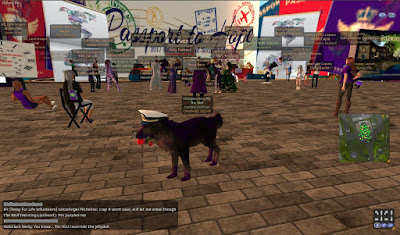 Henning Lionheart aka "The Wolf" of Team Strange Journeys. 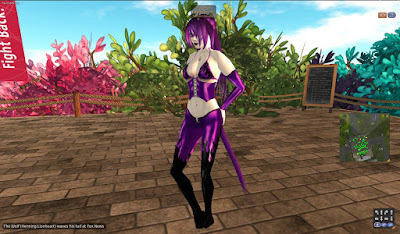 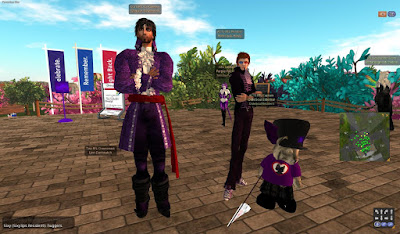 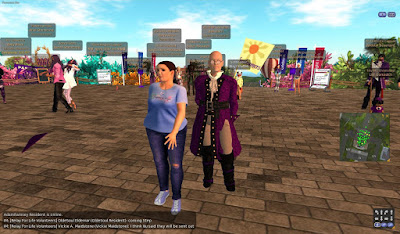 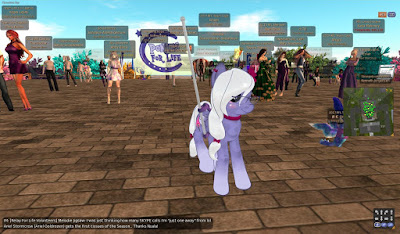 Isolte Ember, the captain of the "Ponies for Life" team. 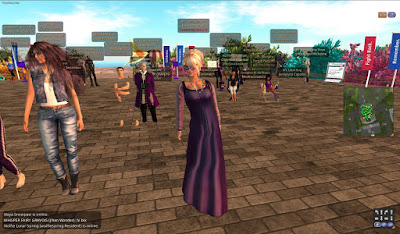 Kalila Mahoney's avatar complexity was a little high, so she wasn't showing on some people's viewers. 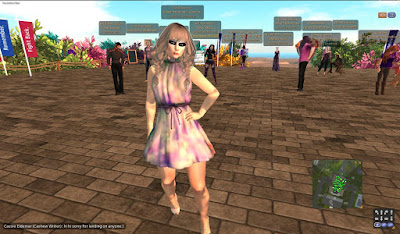 This lady was wearing a mask, though it looked a little like the "dirty binoculars" prank from years ago. 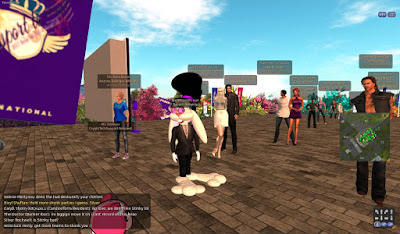 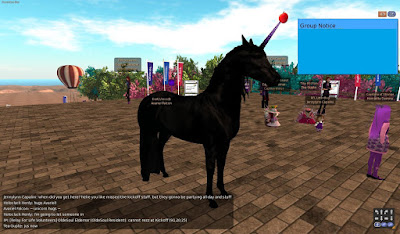 Avariel Falcon was a little late to the event, but made it over. 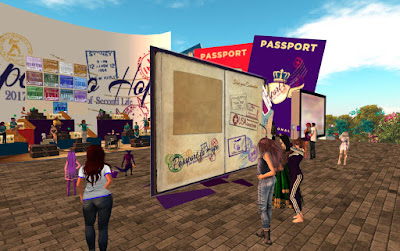 At one point, they were discussing the new "Passport HUD." 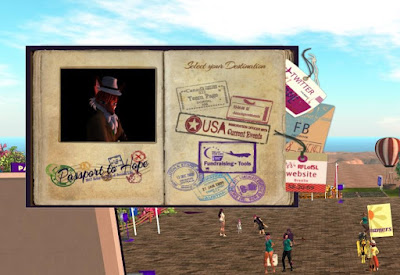 The Passport HUD, named after this year's theme, is a new tool one has to use this year to get certain Relay tools, such as the Relay team kiosks. This year, the kiosks cannot simply be passed around freely. 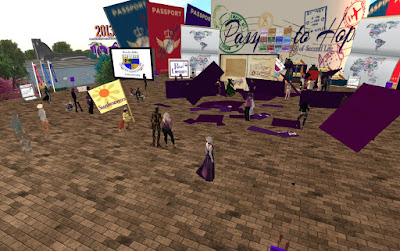 Looks like something broke. I myself ended up crashing several times 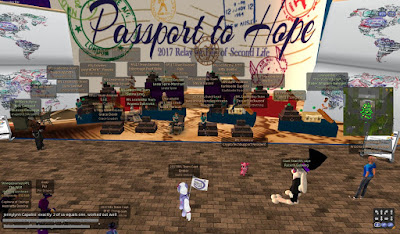 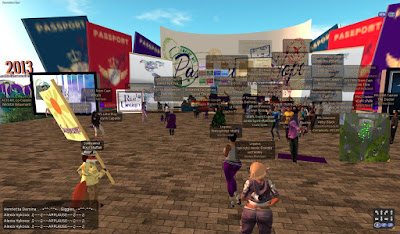 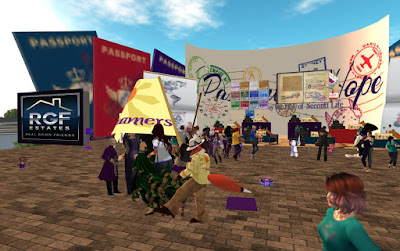 At one point, many of us were in a conga dance. 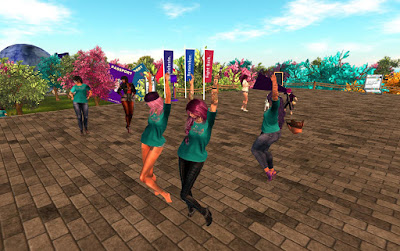 Some other girls were doing their own dancing. Note one nearby avatar that would not fully rezz. 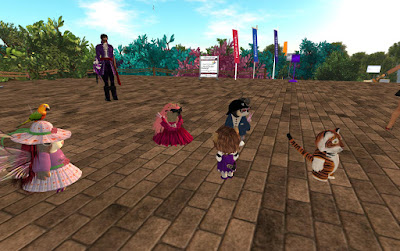 Some of the "Tiny Chrononauts." 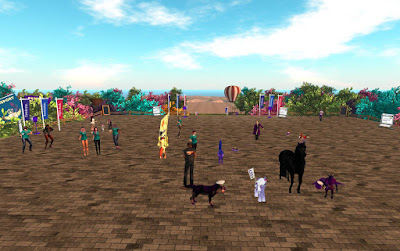 Eventually, the Kickoff was over. But there would be a large number of events that day, as well as the Fashion for Life that had started. Once again, it was time to Relay. Time to once again raise money to help the American Cancer Society in it's effort to find treatments and funds against cancer, and have a little fun while doing so. 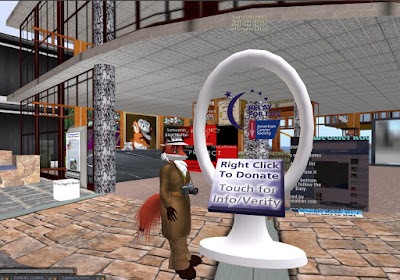 Already after less than a week, a few teams have already hit Gold rank in the fundraising totals. My own team, the Sunbeamers, haven't raised much so far as we've already had to raise funds for a friend in need. But we're expected to soon catch up. You can find our kiosks at Club Cutlass in Sunweaver Bay  (114/117/757), the Happy Vixen at Purrfection Estates (236/219/24), and the SL Newser office at HV Community (140/85/25).

On one amusing note, "Stinky the Relay Skunk" is back. Already one team has been "skunked." So this is sure to mean a number of skunk parties, and no doubt a few SL skunks dropping in.

For a recording of the RFL Kickoff, Bain Finch made one available at https://drive.google.com/file/d/0B3OKHH-Ty8aLVFlDV0Z6ZjJoV3M/view?usp=sharing . Wildstar Beaumont made some pictures available on his Flickr page.

Posted by Bixyl Shuftan at 1:00 PM