April Fool's In and Out of Second Life

For those who love a good joke, or even a lame one, April Fool's Day is a day to look forward to. It gives one a chance to play a few jokes or pranks (harmless ones). The idea of a day for jokes and merriment goes back at least to Roman times. April Fool's Day as we know it has been around for a few centuries, supposedly it started when the adoption of the Gregorian calendar (the one used today) moved New Year's Day from April 1 to January1, and that those whom still celebrated New Year's on April 1 were called "April Fools." 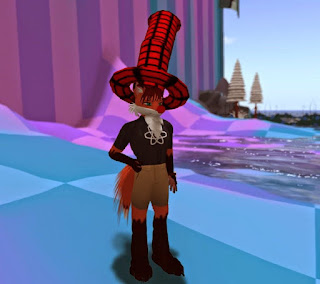 Besides people playing jokes, newspapers and other news media have also done some foolery of their own with joke articles, one famous example being a BBC TV show about "spaghetti farms." And so the Newser has been doing an April Fool article every year, our foolery this year being that Linden Labs pushed back Sansar over a year due to a Windows 10 update, and was working on a third dinosaur-themed virtual world. Last year, we joked Donald Trump had bought Second Life. In 2015, Michi Lumin of Luskwood was in on the joke, us saying she had been hired by ABC News as their technology news anchor. In 2014, the joke article was Linden Lab was doing away with last names in older accounts. Our first one in 2011 was of Linden Lab announcing it was about to shut down Second Life for six months as glitches were about to make it so laggy as to be unplayable. 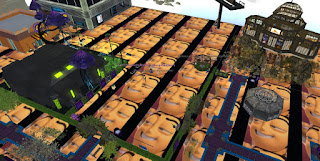 But the Newser wasn't the only one pulling April Fool's stunts. The Furry Fashion mall was temporarily sporting a new look on the roofs. The owner Amethyst Crystal gave me a picture of the new aerial view of the place, "We also changed the sim terrain texture to a picture from the 'Bee Movie.' That is a bit of a meme on the Internet. So we changed the sim terrain for a April Fool joke." She didn't tell me how long the prank paint job would "bee" up.

But this wasn't the only joke. The staff of Furry Fashion played a joke on those frequenting the place by replacing their display names with temporary ones based on the store owner's nickname: Ame. "It's an April Fool thing," Amethyst Crystal explained, "Many people try to say staff are my alts. So some of us have all changed our names to be like me." She then gave me a list of those in her staff who made the change in their names.: 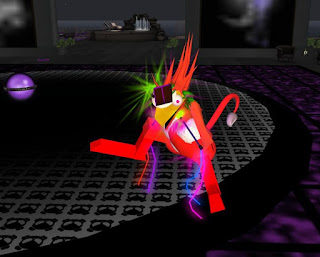 The Furry Fashion Lounge would have an April Fool-themed event: "April Fool/Memes." The group notice for halftime went, "Thats right we are here and having fun this April Fools Day!!! Come Join In the fun !!! all you need to enter the contest hosted by Amethyst get some silly outfits or fashion nightmares mix and match or jester outfits on and come to Furry Fashion Lounge! DJ I Cant Believe its not Ame, has the ABSOLUTE BEST music to help us have fun today. And we have 1300L Up on that board!" People were encouraged to bring their funniest, craziest, goofiest looks. Ukli Resident had a particularly strange appearance (pictured left), "I'm laughing at my own avatar!" Feline avatars were also encouraged, "Cats are made of memes." There were a number of funny tunes played, and a few that had become memes themselves such as the "Rick-Roll" song. The contest was won by Emorald Resident, with Ukli coming second. 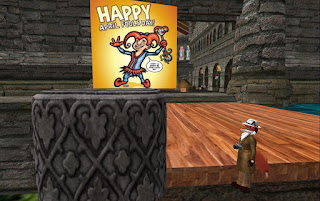 Furry Fashion wasn't the only place to have an April Fool Event. Grendel's Children did as well. Toady Nakamura had the following announcement. 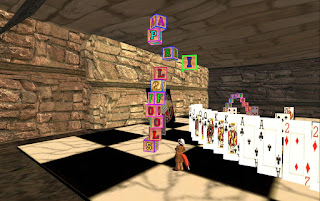 Looking around from the entrance at Grendel's, it didn't take long to find the rocket to ''Catsel Bufo." Inside, there was a shopping area were one could get discount items, such as an underground tunnel kit, as well as a freebie dragon. Going further, there were a number of fun exhibits (be careful about bumping the dino skeletons). Finally getting back outside, there was a "Munchman" game (a Second Life Pac-Man spinoff game).

And then there was the "Everfest" event in Bay City. For three days from Thursday March 30 to Saturday April 1 Bay City celebrated the life of their late noted resident whom passed away three years ago, one noted for her quirky sense of humor. 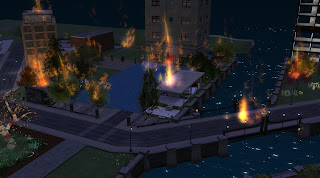 "It went quite well," Marianne McCann, Bay City's most noted resident, told the Newser, "Chaos and frivolity rules, with quite a focus on sharks this time out. Ever did like her shark fancy dress costume, so I s'pose that's no surprise. What struck me is that the events tended to go much, much longer than expected. Folks had a blast bowling, and the dance party was going strong an hour after it officially ended. There were a number of residents who never had the chance to meet Ever, but I Hope some of us who did know her were able to help share some of her spirit."

Marianne also pulled an April Fool stunt that was apart from Everfest. She posted an update on her SL page, "END OF AN ERA: after 10 years in Bay City, it's time for a change. Traded my land with a Kama City landowner. It's time to shake things up in Zindra. ... I hope to be opening "Lirp Aloof's Home for Wayward Child Avatars" in the Oritz region soon!" There were responses of "Oh noooooo!" Before she finally admitted it was a joke. "I got quite a few folks with my April Fool," she stated, "I don't know if I should be happy or dismayed that I actually did fool quite a few."

In the past in the world of gaming, there have been some noteworthy April Fools stunts. Blizzard, the maker of World of Warcraft, made an announcement early in the game's history they would be introducing a panda-like race: the Pandaren. But the joke proved so popular, Blizard eventually brought them into the game for real. And there have been some playable April Fool's stunts, such as War Thunder's "My Little Pony" fighters. But this year, there was a surprising lack of April Foolery in the games yours truly checks out. Elder Scrolls Online had a "Jesters Festival." That was pretty much it. No special games in War Thunder, World of Tanks, or World of Warships. The ships game did have an unplayable submarine added to it's players' rosters, which turned into a free slot when the stunt was over, So at least there was that. No joke announcement in World of Warcraft either. Star Trek Online made a reference to "Contact Day," which made me wonder if the game was saying the day the Vulcans had chosen to make contact was April 1. It wasn't. Perhaps that April Fools Day fell on a Saturday and not a weekday this year was the reason for the lack of gags this time. Ark Survival Evolved did have a major update that put severe limits on flying mounts and boats that frustrated many players, Nydia Tungsten's Furry Gamers group included. But this was no April Fool, and no one was laughing.

So in the world of gaming, in which Second Life residents sometimes step into for a break in the routine, there would be no chuckles. But here on the grid, there were a number of examples of residents cracking jokes and having fun.