Kristin Linden And The "Bid The Lindens Bald"

"Bid Me Bald" events have been going on in the Relay for Life in Second Life for a decade, in which someone pledges to have their avatar go without hair for a certain amount of time if a certain amount of cash is raised. Over the years, there have been some interesting twists, such as "Bid Me Tiny," furred avatars doing a "Bid Me Human," "Bid Me Purple," people promising to go bald in real life, and more. 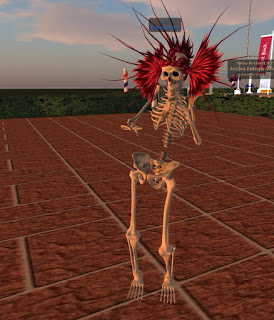 But this year comes something new. While Linden Lab no doubt has been proud of the Relay, highlighting it and being of assistance for the sims on the Relay Weekend Walk, they themselves had not taken part in the event, until now. On March 29, it was announced that twenty-eight Lindens would take part in a Bid Me Bald event. They would be split in three teams, Concierge, Land Operations and LDPW, and Customer Accounts. Each would have a kiosk in one corner of the Relay dAlliez sim. And on the afternoon of April 19, the totals would be tallied and the loser getting shaved.

Among the twenty-eight taking part is Kristin Linden of the Customer Accounts team. She has been with the Lab since at least March 2013. I had the chance to meet up with her at one impromptu event at Relay dAlliez. While no one generally thinks of Lindens as being typical, there's a stereotype that they have ordinary avatars. This wasn't the case with Kristin as hers was a skeleton sporting a red wig. "... look.. it's Skeleton Linden," Rowena Dubrovna, the tiny otter of the Relay exclaimed upon seeing her, "SkeleLinden."

Kristin was going through a few IMs, "My apologies, I am multitasking." but greeted me and hoped I was doing well. I asked her, "can you tell me anything about where the idea for Bidding the Lindens Bald came from?" Kristen answered, "Unfortunately I don't have any information on that as I was not a part of the planning. I was told about it and encouraged to participate. I thought it was an awesome idea, so I figured I'd bring my luscious hair along (smile)." "Is that a favorite hairpeice of yours?" I asked her. Kristin responded, "I think it accentuates my cheekbones." 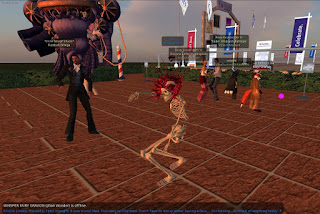 I then asked her about her appearance, "Is this the avatar you're usually in, or were you at an event earlier?" Her answer was it was her usual look, for now, "This is my usual avatar for the time being. I wanted the outside to match the inside." "It's rather .... unique." I stated, "Where did you get the idea for it?" She answered, "Honestly, I just thought it was a cool idea. Plus easy to maintain. Don't have to worry about having a face....or clothing...or much of anything really. (grin)" "Like being bald would be?" Trader Whiplash asked her. "Don't have to worry about skin care that's for sure." Kristin answered. I then asked about the jokes others had made about the avatar, "I take it you've heard a few?" "Some have hit my funny bone for sure,"

Kristin wryly answered. "Can you give some examples?" I asked. "I can't remember any specifics off the top of my head," she answered, "Though I get offered food a lot." "I take if people call that your low-lag avatar?" I asked amusingly. She answered, "I fell asleep at the blood drive." There were a few chuckles and groans, Fuzball Ortega saying, "I like this Linden."

Although Kristin had been a Linden only since 2013, she had heard about Second Life much earlier, "I believe I heard about it around 2007...ish..give or take. I've been in the industry for a while and there was an opening, so I took it (smile)." "I take it your first days were interesting?" I asked. She responded, "Every day is interesting." Someone asked, "How do you get to be a Linden?" She answered, "You apply for a position/job like with any other company. Our current open positions should be available on the Careers section of the Linden Lab website."

I asked Kristen, "What inworld experiences stand out besides taking to the guy with the biggest hair in Second Life, and talking to a fox reporter? (smirk)" Kristin answered, "Any time I get a chance to hang out and interact with Residents is always a pleasure." 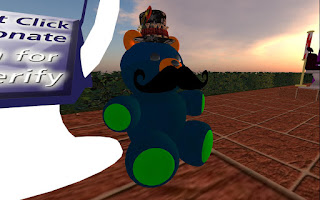 Someone soon asked, "Kristin, may I have one of you adorable mustache bears?" Most Lindens have teddy bears they give out on request. Some have unique features, Kristin's being green with lip hair. The bony Linden answered, "Of course!" "I love that one (laughter) Thank you (smile)." "You're welcome (smile)."

The Linden reminded everyone, "And feel free to spread the word! We do have a post about the event on the forums as well: https://community.secondlife.com/forums/topic/404561-bid-the-lindens-bald/"

Eventually, the crowd for the impromptu event thinned. And Kristin had to go Away From Keyboard to take care of some matters.

The Bid The Lindens Bald event ends on April 19. There will be further Bid Me Bald events. It is unclear how soon Linden Lab will get involved again.