Burn2: Getting The Burning Man Alight

Saturday 28 October at 1600hrs the traditional Man Burn ceremony started on the Burn2 playa with the lamplighters turning out to dance to eclectic ethnic beats provided by Dj Cuga Rajal.  Each year, the festival reaches its climax and conclusion as the landmark Man and Temple are set on fire and burned to the ground in separate ceremonies. To give organizers the best chance of success at the Man Burn, scheduled for 1700hrs, the Black Rock sim was closed to all but the Man Builders and Burn2 Rangers. Spectators gathered at strategic vantage points on the edges of adjoining sims where a good view could be had of the flammable wooden Man in its surrounding 'Temple of the Golden Spike'. 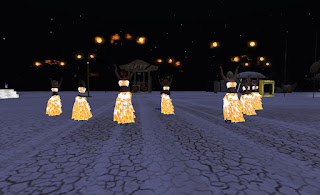 However, after the lamplighters had walked off the area, leaving it to the Man Team to start the fire, crews ran into technical difficulties with scripts on the sim. A lively camaraderie settled on the crowd, waiting in the certainty that it was going to be an "awesome burn". Calls went out for builders on Black Rock to temporarily turn off scripts on their builds, AVs shed their Animation Overrides to minimize lag, and spectators were requested not to try camming in and touching the Man while the team was working on it. 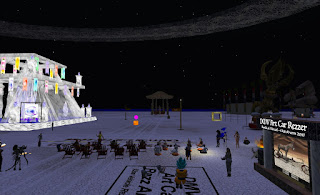 To pass the time, refreshments and other free stuff was shared among the punters, and helpful suggestions about rubbing sticks together or throwing a zippo out to the team were made. Someone was even picking a banjo. Generally everyone stayed upbeat and, as one AV commented, "I'm content sitting here in the glow of radical inclusion." Down on the ground, over in Black Rock, the Man Team worked steadily in the dark at the base of the Man, who continued to defy their efforts to set it alight. 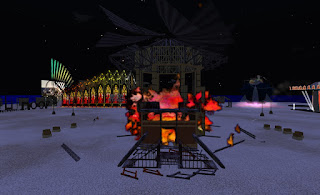 At 1738hrs, nearly 40 minutes after schedule, iSkye finally announced, "BURN IS READY!". The crowd primed their cameras and, moments later, a series of explosions went off around the Man, followed by the red flicker of a flame. The whole structure was quickly engulfed in flames and began to break apart as ground crew hurried out of the way of falling debris and the crowd whooped with delight. It was over in a few minutes; the remains of the man lay smoldering on the desert floor and everyone agreed it was a great "burn!"

The Temple Burn was scheduled for Sunday, beginning with a lamplighter's procession at 1000hrs. The Temple burns at (approximately) 11:00am and this was preceded by a public readout of all the messages that had been posted in the Temple Censer during the week. For those missing the first event, there was the chance to see that again at 1600hrs, with the Temple being ignited at 1700hrs. The best view of these was from Black Rock, along the sim edge.

Although the events schedule concluded on Sunday, all the builds are staying up through to the 4th November for visitors to admire and enjoy, and 'Skin Burn', a reprise of the Man Burn, will take place on Saturday the 4th at 1100hrs and 1700hrs. 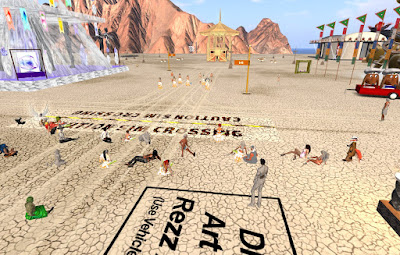 The crowd just before the burning of "The Man." 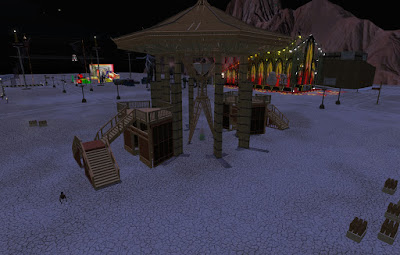 "The Man" just before the burn. "Should we save The Man from being burned?" the crowd was asked, "Or do we let him burn?" The crowd of course wanted fire, "Burn him!" "Let him Burn!" One person spoke, "Yes, let him burn, but burn him with *love.*" 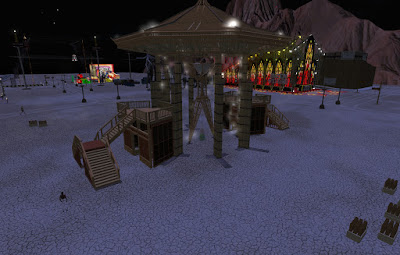 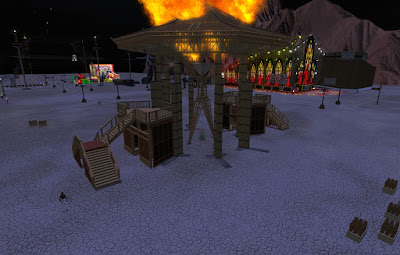 And "The Man" becomes aflame. 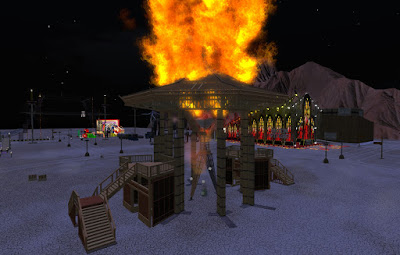 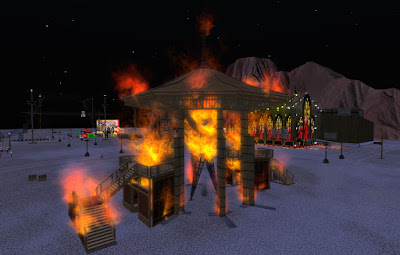 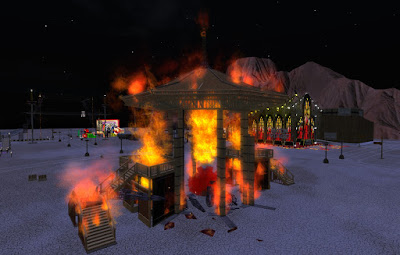 And it isn't long before "The Man" is in pieces, sooner than in most previous burns Yours truly remembers. 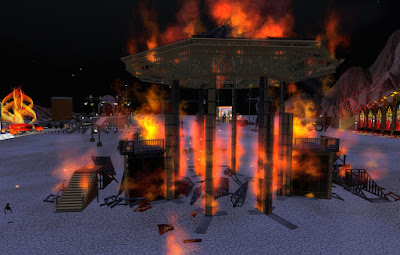 The supporting structure continues to burn. 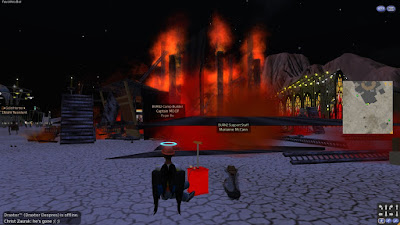 Marianne McCann and Pygar Bu watch the fire from next to the plunger, which they apparently pressed to start the fire. 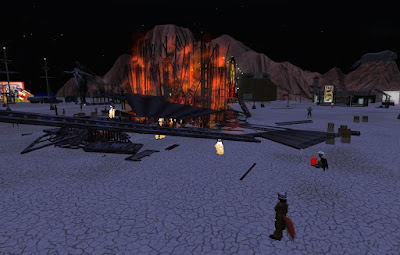 Those nearby are invited to go up and enter the fire. 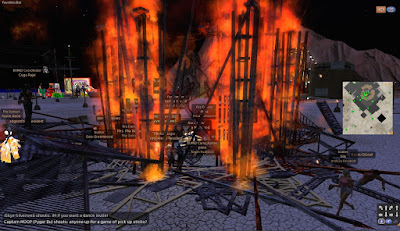 "Anyone up for a game of pickup sticks?"
Posted by Bixyl Shuftan at 6:00 AM