Burn2 Radical Ritual Gets Off To A Firey Start


Saturday at 10AM, the five sims of radical self expression that makes up this years main Burn2 festival opened to the public with the usual ceremony. As darkness fell on the baking dust of the playa, the lamplighters emerged like the sun at midnight to lead the procession. 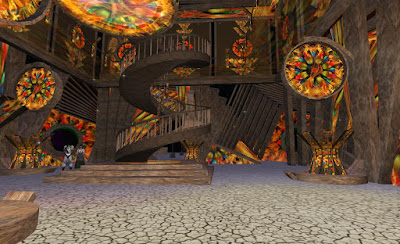 The event was hearteningly well attended, to the point where the Deep Hole sim was full at times. The lamplighters rode a truck, haltingly navigated iSkye Silverweb, passing significant landmarks, and followed by an array of burners on bicycles, on foot and in other random vehicles. The pomp and high jinx culminated in the 'blessing' of the Temple with lamplighter fire at 10:30am.
In the pervading atmosphere of anarchic fun, avs scooted around, test driving freebie vehicles, greeting strangers and exploring the builds from magnificent to homely. Burn2 fosters a "gift  economy" so any visitors would be well advised to take along a big sack in which to stuff freebies. 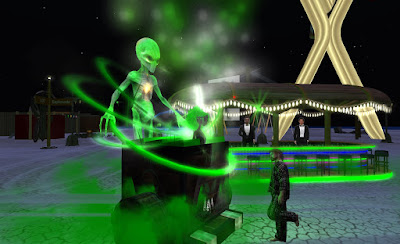 It felt like everyone was letting their hair down a bit after the huge amount of planning and building in recent weeks. When the lag got too much, I retired to Sojourner's Outpost, the camp I co-built with a friend, where we chilled, drank moonshine and entertained a couple of guests and some wandering visitors. 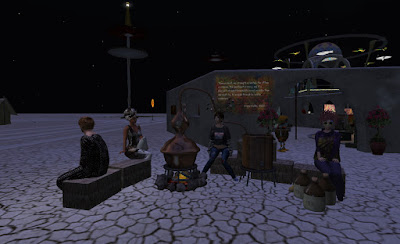 Being a participant this year has given me an insight into the back-story of Burn2 festivals, which begins for builders with the pre-sale of plots back in July. Particular attention is given to ensuring that builds minimize lag in order to give a range of visitors the best experience possible. For instance, most of the textures used are limited to 512x512 pixels, particles are kept down and prim building is favored over mesh. Once building starts, creators move in on the playa and many put up tents and make sure their basic needs are supplied while building goes on. This is an enjoyable time, when it's possible to get something of the authentic feeling of  participating in a Burning Man festival. Of course, some builds go up very quickly at the last minute, and even during the opening there were a few random things the organizers had to see to, such as porta potties popping up in the middle of a roadway. 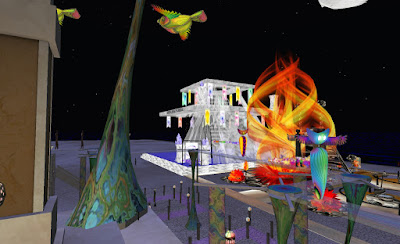 This year's theme of "Radical Ritual" has inspired a range of interpretations and exploded in a  wealth of 'temples' reflecting dimensions of spirituality and the mundane, and constructed with spades of the humor and creativity that tends to characterize Burn2. In kinship with the real-life Burn this year, builders were invited to consider "reinventing ritual in our post post-modern world - disregarding assertions of belief and focus on the immediate experience of play. Play can free us to envision truths of which we have no proof or warrant, and breaks down the distinction that divides belief from make-believe. Whole-hearted, creative play induces self-surrender to experience that is beyond the scope of reasoned thought.” 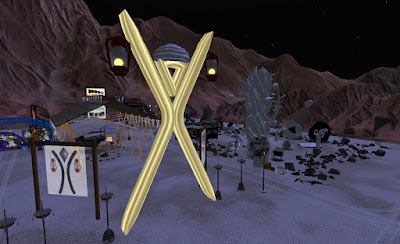 This year's festival is spread across five sims and will probably take more than a single visit to explore fully. On the fourth sim, Alkali, building rules have been more relaxed and creators have had the opportunity to take their 'radical expression' a little further while ensuring that their fun doesn't interfere with anyone else's. In addition to the main stage, there's a second big stage for live events on this sim. 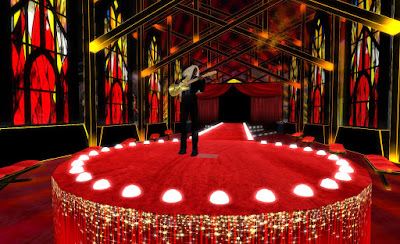 Kicking off events at the main stage following the opening procession was the one-man-band Al Hofmann with his Burning Guitar, playing his laid-back style of jazz fusion. The Alkali stage was baptized at noon with the explosive beauty of Yman Juran and the ChangHigh Sisters' fireshow of light, life and love. Both sets of performers can be seen again during the week as part of the stuffed program of events running until Sunday 29 October and ending with the final Temple Burn at 5pm. 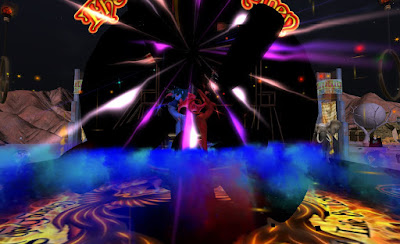 It's going to be a blast. See you there!