Mary and Joseph Near the End of their Journey

In Mexico, the lead up to Christmas day is marked in many places by the tradition of "Posada". Each night, Mary and Joseph are figuratively "hosted" in a different home in a village, with a parade and ceremony marking their progress from one home to the next. This tradition has become increasingly popular beyond Mexico, and it even has an equivalent in Second Life. 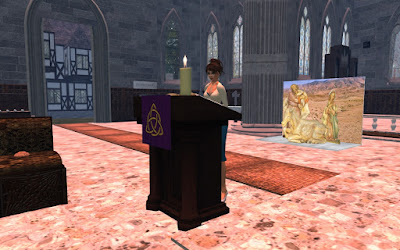 Since 2009, the Anglicans of Second Life group has hosted an annual Posada in which figures of Mary and Joseph are passed from one volunteer host to another through the season of Advent, staying over in chapels, gardens, campuses, cafes, private homes - wherever a space can be made for them. They reach their destination in the crib scene at The Anglican Cathedral of Second Life on Epiphany Island on Christmas Eve. 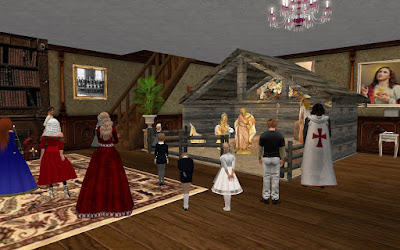 The Posada provides a simple moment for people to get together. Sometimes hosts will provide food or entertainment as part of having Mary and Joseph to stay on their sim or parcel. This year, for instance, there was a performance of the St. Columba Choir before the figures moved from Salem Land School to St. Columba's. While the event is run by the Anglicans of Second Life, hosts may come from any or no church or denomination in Second Life - all it takes is a willingness to show hospitality. 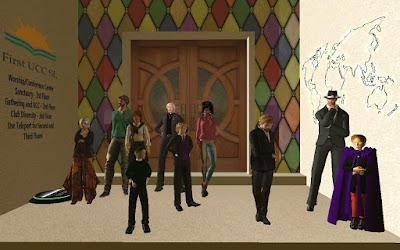 Coordinating hosts and handovers across multiple time zones is an enormous task that usually falls to a single volunteer. This year, nobody felt they quite had the time or energy to take on the responsibility, and the event was cancelled. However, it has been such a popular feature of this time of year that the community rallied and Hunny Spiritweaver volunteered at the last minute to make it happen. 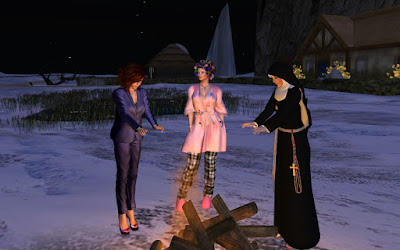 "It was an honour and a privilege to coordinate the Posada this year," she tells me. "I was nervous, because the past coordinators did such a splendid job, and those were big shoes to fill."

I asked her about her best moment in coordinating the Posada. She is quick to point out how important the wider community is to the success of the event. "It was a pleasant surprise to meet so many generous people who embodied the spirit of generosity that we honour in the Posada tradition. It wouldn't have been possible without the support form Vincent Markovic, as he kept the times organized and took really nice pictures." 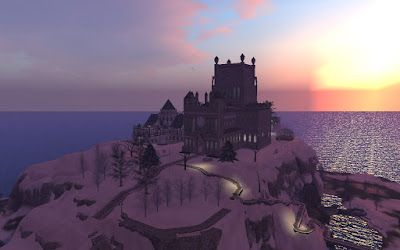 The figures will complete their journey around the grid by returning to Epiphany Island on the 24th December at noon. Following a short service in the Cathedral for the Fourth Sunday of Advent, they will be handed to the Second Life Anglican Lay Pastor, Helene Milena, by the final host,  Father Nolasco at the Mater Dolorosa Cathedral. A stable has been made ready at the entrance to the Cathedral and the crib scene can be visited throughout the Christmas season.

Klaus Bereznyak
Posted by Bixyl Shuftan at 6:00 AM