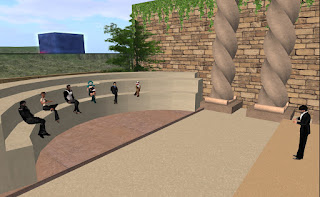 Usually the topic is a science related one. Among them, how will the development of artificial intelligence affect humanity and society in the next ten to twenty years? Could tapping the large "pool" of magma just under Yellowstone help stave off a massive eruption while at the same time give the United States a large source of energy? What would factories on the moon be like? For last Saturday, the topic was a subject that's been the plot of a number of science-fiction stories, and the preliminary story of a few world-builder computer games: the emergency evacuation of Earth due to an impending disaster.

Let’s suppose we need to leave Earth in a hurry in a few (20? 100?) years’ time.  Maybe because of a nuclear winter, maybe because of an asteroid strike or maybe because the sun is about to explode.  How would we go about it?  Who will we select to go?  Could we, should we, turn anyone away?  If we have to travel for several generations who will be kept in stasis and who will be woken up on arrival?  Who will run the ship?  What animals and seeds will we bring with us?  How will we know what will be needed when we arrive?  Will we bring some animals and plants just because we like them? How will we organise life on the ship so as to keep social structure intact?  And when we arrive at a habitable planet will we dare leave our comfortable ship?  Maybe we will decide that life on an endlessly traveling ship is better. Come and talk with us about our future because, one day, we may need to pack.

Someone asked about the possibility that politicians might try to keep such a disaster under wraps so only they and a few select friends would be saved. Erik responded, "You would think that, ... but you know, the Internet, everyone, including scientists, are vloggers now. Such a disaster could not be contained ..." Someone else commented, "I'm thinking that an asteroid scenario would be like 'When Worlds Collide.'  We'll send our best in a space arc, and the rabble will try to destroy it at launch, out of envy." And whom would be the colonists? Someone suggested perhaps only women would be selected to double the number of people able to give birth, relying on a sperm bank to have children.

It's a fair guess that if humanity had to pull off such a thing in the near future, it could barely be done and with close to the minimal number of people able to continue the survival of the species. "Could we do it?" Erik asked, "would we be able to build arks in 20 years?" "If we put our minds to it, sure," he was answered by one, "I would say that a concerted effort would do in in six months, tops." "In 6 months we could have a generation ship," someone else suggested. Another was a little skeptical, asking if space travel wasn't such a huge undertaking, why didn't we have men on Mars yet. I suggested that the reason was there had been no large deposits of gold or any other valuable minerals found.

Reasons for an immediate evacuation wouldn't necessarily be due to nature, but by fellow beings. I recalled a friend's science-fiction story in which the alien race humanity first runs into are in two factions. Over much of the history of their homeworld, there are two major civilizations. One was driven by science and democratic rule. The other was driven by a religion that compelled them to try to conquer the other. The first could beat the second in warfare, but never could convince them to change their ways. Finally once faster-than-light travel was perfected, after the next war the first civilization ordered the people of the second off the planet, many millions ordered into cramped spaceships and shipped to another world.

Erik brought up one interesting possibility. Living in a space ark wouldn't be a comfortable existence. But once people were used to it, would they prefer it to settling on a world? As Erik put it, "would they *want* to live on a planet will all kinds of weird diseases?" Someone commented, "There was 'Orphans of the Sky' by Heinlein, where, at first, when they *finally* arrived at Far Centaurus, they had acrophobia, but it was so much better than the ship, they adjusted. Or at least we are left with that impression, as the story ends with arrival." I brought up in some stories, the colony ship was often the first structure of the colony, and remained the largest one for some time.

And would it be necessary to leave the solar system? Someone suggested a space ark (or a fleet of them) might just hang around until Earth was habitable again. Once you could build a large enough ship that could house a population indefinitely, would finding a colony be such a big priority, "Maybe once you go to the trouble to build a large generational ship that can have a seriously large population, a planet doesn't buy you much." I wondered if someone would bring up the idea of tunneling deep underground and wall-up against any disaster and spend generations in a self-sufficient underground area. But that less romantic idea wasn't discussed. There was one idea I didn't expect that was: what if a colony ship arrived at it's destination, but there was no one to colonize the planet as they had all committed suicide, "speculating on the overwhelming depression that generations of people in a generation ship may feel."

Someone did bring up one topic that I haven't seen in too many sci-fi tales, the idea of large numbers of humans moving to an alien civilization to live. That was a concept I had seen in some stories about the Chakats and their homeworld. But the Chakats did not evolve there; they were a genetically-engineered race created on Earth. The humans were going to a world where the natives spoke a dialect of English.

There were other topics discussed, such as the Metric system and why it wasn't adopted by those stubborn Americans. Eventually, the hour was up, and it was time for me to go.