By Bixyl Shuftan
(with pictures from Dahlia Jarham and Daniel Voyager) 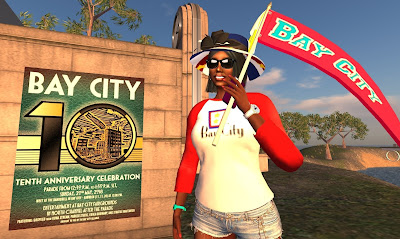 On May 20, the Bay City area and community celebrated it's tenth anniversary. Bay City is Second Life's largest urban area, and one of it's better known places. It also has the distinction of being the first major project of Linden Lab's Department of Public Works, the idea of creating a place where residents could live "the American urban experience, between 1940 and 1965, perhaps best typified by Chicago circa 1950 and marked by a distinct deco influence." Starting on it's second anniversary, the community has held an annual street parade, the best known on the grid, and a music and dance party to celebrate it's opening. 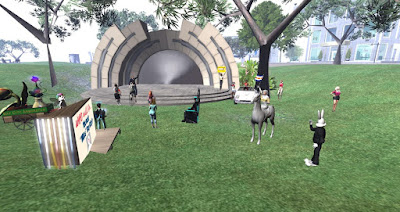 Yours truly didn't quite make the parade (you can see the pictures Gemma and I took in last year's). Dahlia Jarham and Daniel Voyager did, and posted some on their Flickr pages. Before the parade started, participants gathered in the Harwich sim. 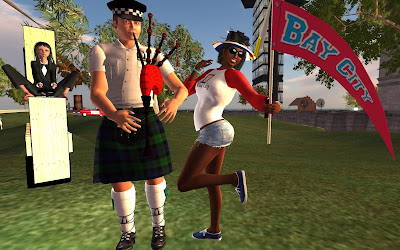 There would be floats and vehicles of all kinds, though some would be on foot. 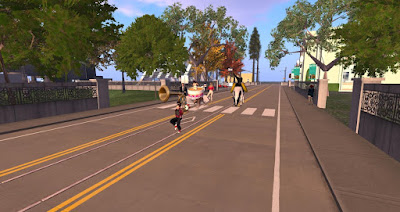 The parade started at 12:30PM SL time, and judging from the pictures, there was quite a lot to see. 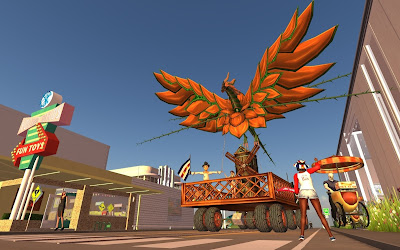 The parade would go by places, such as this motel. 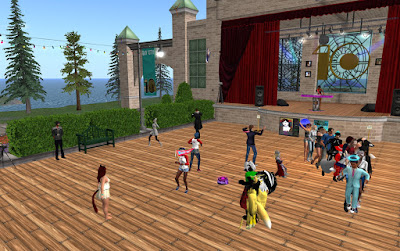 By the time I finally arrived, the parade was all over. But the concert was starting up, "Welcome to Bay City's 10th anniversary celebration!" With my choice of outfit being a bit limited due to a fundraiser, I went with a different avatar than usual, which confused a few people. But they were happy to have me, and my friend Shadow, join in the celebration. 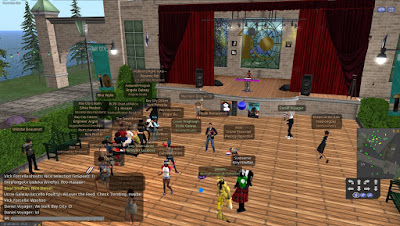 Kennylex Luckless was among those most enthusiastic, "There is not a party without Bixyl.!" 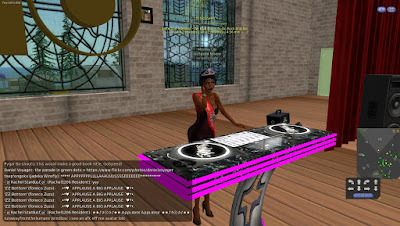 GoSpeed Racer was the DJ for the first hour of the party, sporting the "Miss Bay City" crown she currently wears at events in the area. 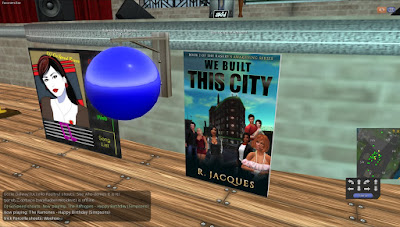 GoSpeed has recently been writing fiction about characters in a virtual world. Although Second Life isn't mentioned, it's fairly obvious what the inspiration was, "For those who may not know, I named my second novel, 'We Built This City.'  You can buy a paperback or eBook version." 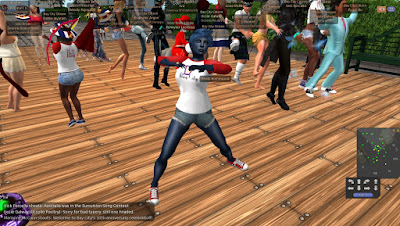 Ucello "Uccie" Poultry was looking a little blue, though not feeling blue. 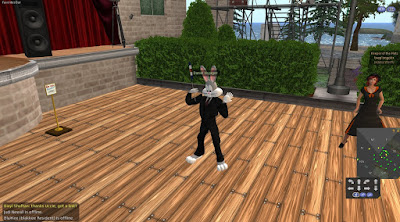 Daniel Voyager was also there. Marianne McCann was out of sight and behind the curtain on stage. 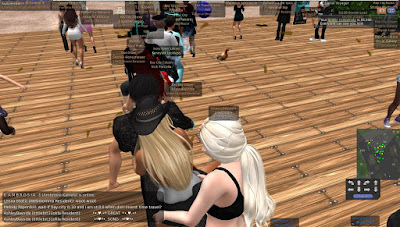 And like most parties at the North Channel stage and dance floor, there was a conga line dance. 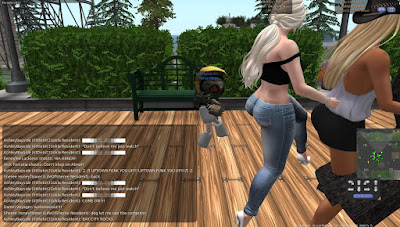 And some of the moles showed up. Abnor Mole joining the conga line. 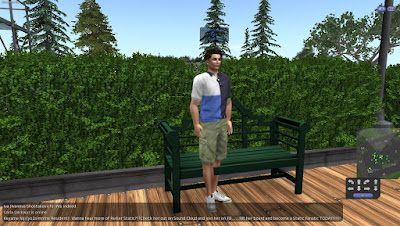 Others were Hexidecimal, Ginger, and Garden Mole. 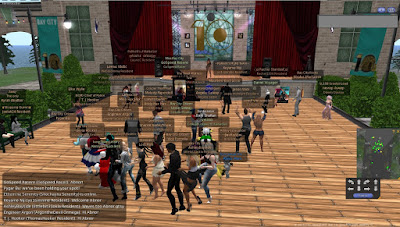 Eventually, GoSpeed played her closing tune, "Man or Astroman," picked up her equipment, and got off the stage. 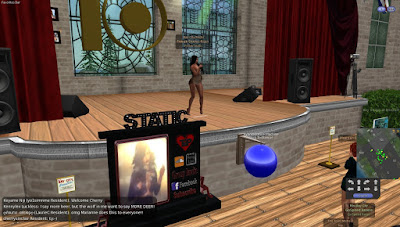 She was followed by live singer Parker Static. 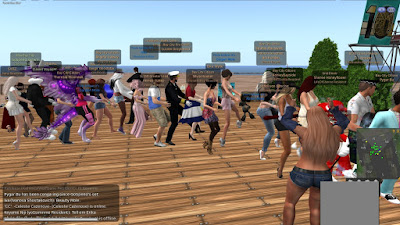 At one point I ended up crashing. When I came back, my viewer was conserving memory by not showing the stage. The other moles had joined the conga line, Garden Mole apologizing for her tail getting in the way of the person behind her. Abnor Mole joked, "This is a little known fact, but if you can make a conga line in SL wrap all the way around in a complete circle Philip Rosedale will appear in the center and tell us if there will be 6 more weeks of lag. Or that might just be a rumor I made up. It's hard to tell." 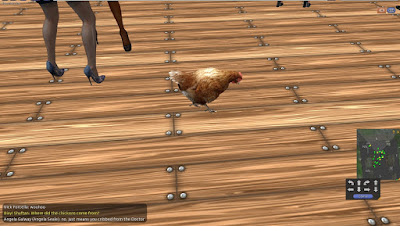 At one point, someone began dropping chickens onto the dance floor. Abnor Mole remarked, "Is it bad that I suddenly have a craving for chicken nuggets?" "I want to do the chicken dance for some reason," another remarked. 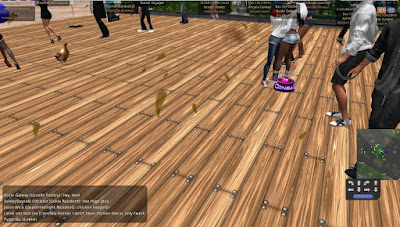 And after a minute or so, they exploded into a cloud of feathers. 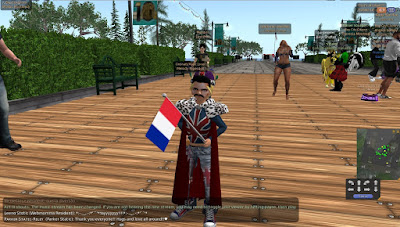 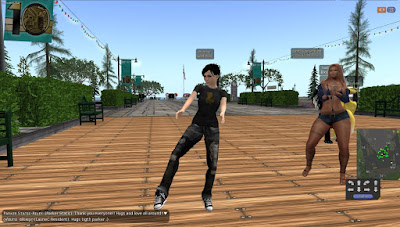 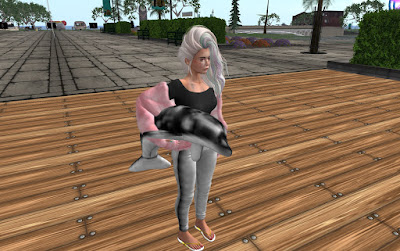 What was the "porpise" of this? 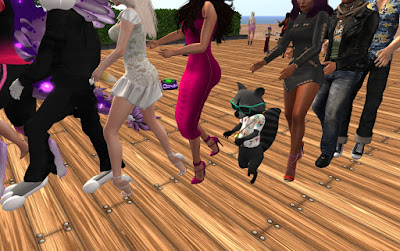 Eventually, it was time to leave. Although I was a little late, it was a great party. But my all means this isn't the end of the events here. Later this summer is "Hot Bay City Nights," and other events this year.