Scenes From Bid the Lindens Bald 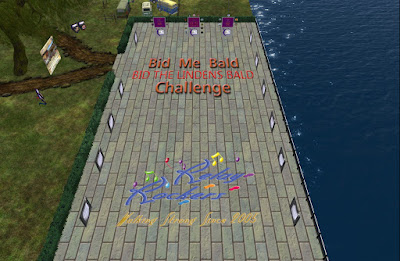 Besides being the scene of the Relaystock from Friday May 4 to Sunday May 6, the Relaystock sim was the scene of another fundraising event: Bid the Lindens Bald. Organized by the Relay Rockers with the help of Linden Lab, nineteen of the Lindens were putting their hair on the line for the purpose of raising money for the Relay for Life in Second Life. The RFL in SL is one of the larger chapters of the Relay for Life, the American Cancer Society's largest fundraiser.

Last year, the first "Bid the Lindens Bald" event raised almost a million and a half Linden dollars, a huge success. Like last time, the Lindens volunteering were in three teams. The Product Ops team had Alexa Linden, Ekim, Grumpity, Oz, and Patch. The Support Leaders team had Ami, Garry, Keira, and Tommy. The largest team was Support Agents, which had Corky, Evie, Ginger, izzy, Kristin, Madori, Sparky, TJ, Vix, and Vanessa. At the Relaystock sim entrance, there was a kiosk for each of the three teams. And at the end, the team in third place would go bald for one day for each 5,000 Lindens the two other teams combined raised. 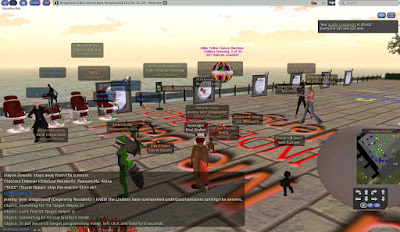 On Wednesday May 9 at 4PM SL time, the kiosks were frozen and the totals added up. The Support Leaders team got the most, a total of 180795 Linden dollars donated. Second place went to Support Agents, whom had gotten 99467 Lindens in their kiosk. And third place went to Product Ops, which got 28,287 Lindens. The three teams combined had made 308,549 Linden dollars. It would be Alexa, Ekim, Grumpity, Oz, and Patch Linden whom would be without their hair for over a month. 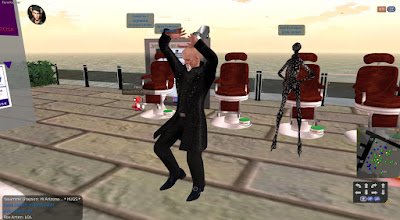 Thanks to some computer trouble, I didn't make it in time to see most of the Lindens get their haircuts. "Looking good," Trader Whiplash, who was playing "Almost Cut My Hair" by Crosby Stills Nash and Young when I arrived, would say, "So far still 10 ears!" But I did arrive in time to get some pictures, such as Oz Linden dancing away, "Oz is looking pretty good here, and no blood." Oz himself asked, "Send recommendations for cool scalp tattoos!" 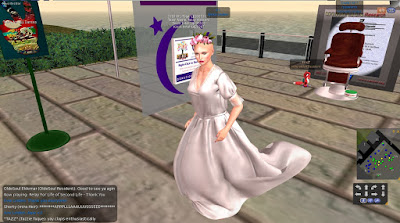 Alexa Linden, whom with a shaved scalp was covering it with flowers. 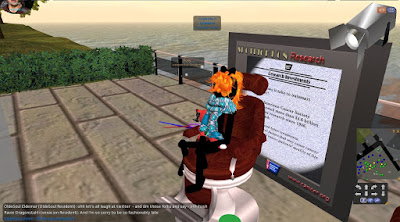 Grumpity Linden was apparently just getting her haircut. 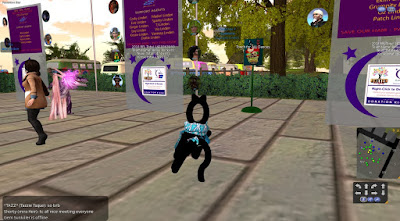 Later on, I would see her sans hair. 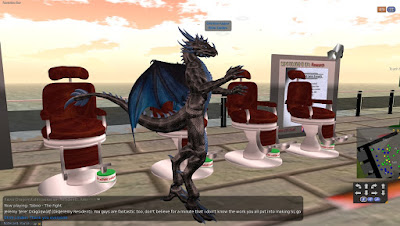 Ekim Linden looked like he didn't have much hair to begin with. But who's going to argue with a dragon? As for Patch Linden, I never did see him, "Patch is soo in hiding," OldeSoul Eldemar remarked. 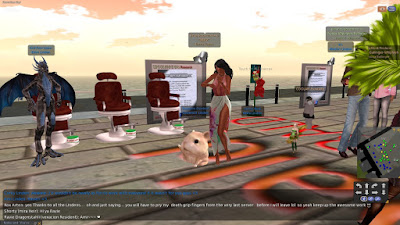 Governor Linden was halfway sunken into the ground when I saw him. As he had scissors in his hand, apparently he had been doing at least some of the haircuts, and the tiny skunk in the place was staying clear of him while he had them. Someone upon seeing him remarked, "I KNEW IT! I KNEW the Lindens have overworked underpaid hamsters running the servers." Vanessa Linden told him, "Shhhh don't tell our rodent secret!" 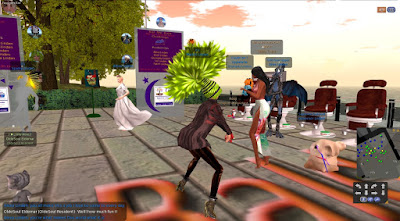 Madori Linden dancing away with her long green hair. 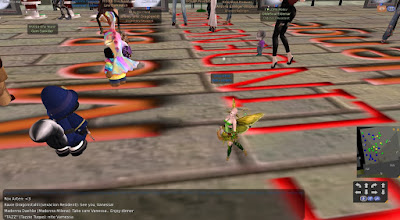 Keira Linden was on the winning team, and didn't have to go bald. But the pixie Linden did so anyway. 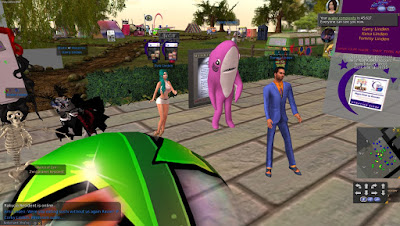 Kristin, Garry, Evie, Caleb, and Tommy Linden. We don't know however if Caleb was the right shark or the Left Shark. 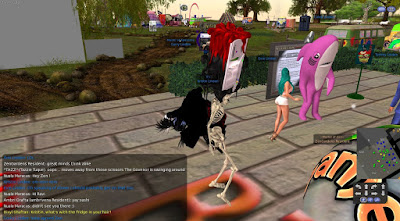 A better picture of Kristin Linden, whom was a skeleton avatar with a refrigerator in her hair. I asked her what the kitchen appliance was doing there. Madonna Daehlie commented, "What? No, Bixyl.. You got it backwards.  Kristin's fridge has grown a skeleton." Kristen herself replied, "It's where I store my leftover souls I eat." Another remarked, "Kristins fridge head reminds me of that meme: 'I don't know whats going on in this picture, so heres an image of a skeleton with a refrigerator on its head.'" That got the bony Linden's attention, "Oh if that's an actual thing please do send it to me. Hahaha!" Late in the party, one would remark, "Looking at Kristin, I'm wondering if the company pays a living wage?" 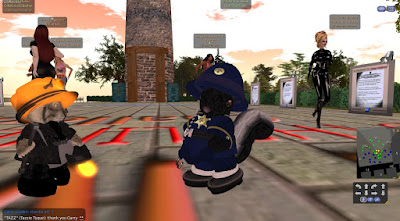 Oldesoul in a tiny avie, and Tazzie "Tazz" Tuque in a "Pawlice" uniform. 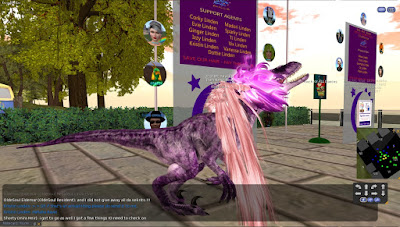 Corky Linden in a velociraptor avatar, with wig. I joked, "Corky, when my friends see you, they're going to think Second Life has an 'Ark Survival Evolved' sim" Corky responded with a "Haha Bixyl." I turned out Tommy Linden was the Ark player, "Oh my God! Bixyl, I love Ark! ,,,Corky watches me play a few times. ... She likes the dinos, she does not like me shooting them (laughter)." 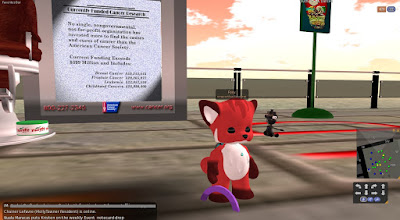 I saw this little guy with a piece of scissors. Was he trying to do a haircut? 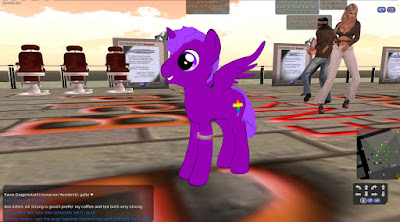 This pony was with the Relay for Christ team. 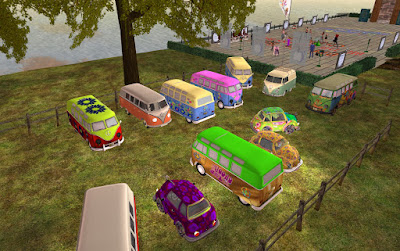 Looking outside the dance area were some vans from the Relaystock a few days earlier.

While there were a few jokes at the Lindens' expense, there were also some complements. Corky Linden responded to them, "Awwww (smile) It wouldn't be nearly as fun to work with everyone if it wasn't for you guys." "You guys are fantastic too, don't believe for a minute that I don't know the work you all put into making SL go." 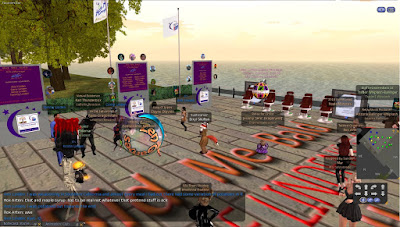 Eventually, the event started to wind down. Tommy Linden spoke as he left, "Alright folks, its been a lot of fun, thanks for coming out and hanging out with us and donating! You all enjoy the rest of your evening!" Alexa Linden told those still there, "Thank you all for making this event such a success." Evie Linden would say, "Thank you everyone for your donations! This has been a spectacular event! My hair also thanks you (smile)."

And so, another Relay event had a successful end, raising over a thousand US dollars for cancer research.