The "Christmas in August" Fundraiser Party in Caledon 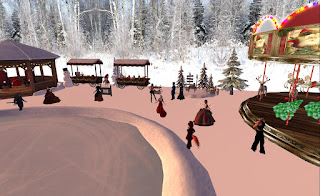 Christmas can be such a fun holiday, some look for reasons to throw a "Christmas" party in the summer months. So when some people looking to have a benefit event for the Caledon Oxbridge University, a "Christmas in August" theme was soon settled on. And on Friday August 31, people met up in a decorated skybox high over the Caledon Oxbridge Village sim to listen to enjoy the music and scenery, and have fun. 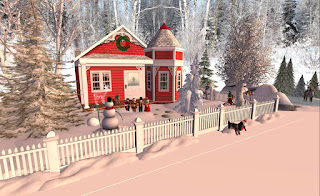 For those who don't know, Caledon Oxbridge University is best known for its orientation classes for new residents. Details about the classes can be read at the university's website at (http://www.caledonoxbridge.org/) As for the party, the scenery around the skybox was quite Christmasy with a frozen pond in the middle, a merry-go round, stands where people could grab a cup of coco, a gazebo meant for Santa Claus to sit in, though this being August he was absent, with a sack people could grab a present from, a smaller pond where a few mechanical carolers were dancing, a red house in the middle of a white picket fence all decorated for Christmas, and plenty of reindeer and other critters. There was also a campfire somewhere. 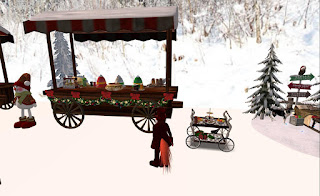 From 3 to 5PM SL time, DJ Nyree Rain played music for the crowd. There was a number of traditional Xmas tunes. But there were some other songs. After a one hour break, DJ Cynthia Farshore took the music stream. She played songs such as, "A Pirate Christmas," Mannheim Steamroller's "Coventry Carol," "O Holy Night" sung in Navajo, the "Grinch" song by Boris Karloff, Queen's "Thank God It's Christmas," and others.

"Lovely place!" Shockwave Yareach commented as he looked at the scenery, "I'll have to finish my Xmas lights soon." Cynthia chuckled, "like Wal-Mart, not even Labor Day and he's putting out lights." When Trans-Siberian Orchestra's "Wizards in Winter" started playing, Shockwave commented, "And EVERYONE asks me to have this song in my show!" 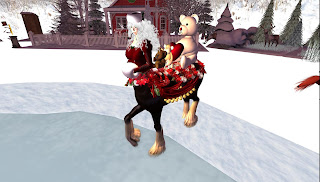 Stereo Nacht wondered if her outfit was more complex than her avatar, "Hm. I worry the snowflakes with my dress are rising my complexity. It's not often I get about 100k as a Tiny." Liška Bystrouška (Liska Fuchs) brought up Shockwave's buck goat avatar, and Cynthia's vixen, "One week, and Shocky and Cynthia will be their old selves again (smile). Andrea Jones (andreajonesms Resident), whom was in a taur avatar that had a few teddy bears on her back, responded, "Aww, I like them this way Liska." Shockwave joked, "Well I'm tired of can food." Andrea countered, "But don't you enjoy being nimble footed Shockwave?" He answered, "I miss having soft toes to wriggle ..." 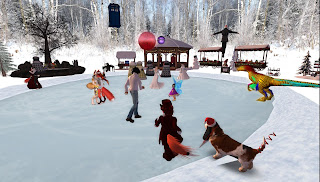 Cynthia was saying, "Wow! Showing ... some one in Rajagiriya, Sri Lanka is tuned in to the stream." "A Ceylong way," Liska mused. It was at this time Weird Al Yankovic's "Christmas At Ground Zero" began playing. Cynthia joked, "Now to make them in Rajagiriya, Sri Lanka really go HUH?! with this tune." It was brought up two of the small country's bigger neighbors were nuclear-armed rivals. 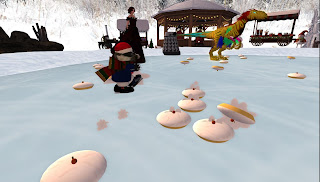 It was probably inevitable, but eventually someone got a snowball thrower and started tossing. "Oh no!" Andrea commented after getting hit, "Snow Balls!" The frozen missiles zipped around for a couple minutes. Then something new was added: frogs! "Frogs .. is we in Egypt now?" Leelee Blessed asked. Shockwave chuckled, "Toadly in theme." "Did somebody croak?" I asked. "Or did they just get frog in the throat?" Shockwave joked, "Coming soon to your freezer - frozen frog legs." Other things were soon tossed, from turkeys to rolls of toilet paper, to pies. 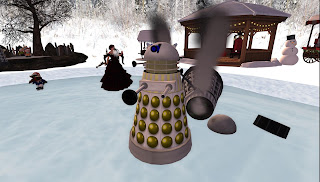 Then the "Doctor Who" music began playing. Which at a steamlands party often means some certain metallic company is not far away, "Get yer guns ready!" And then came the Daleks, the infamous robotic villains from the sci-fi show. "A Christmas Dalek I love it!" Peter From New York called out. But if they hate anything more than humans, it's other factions of Daleks, Renegade versus Imperial. So most of the robots wiped out one another, and the two left were easily overcome by snowballs, or "exterminated." Andrea sighed at the mess, "Daleks, always leaving a mess for someone else to clean up." 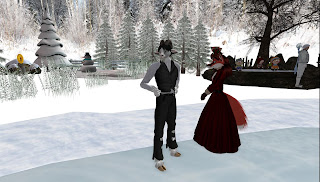 Eventually, the two hours came to a close. "Thank you all for coming," Andrea told everyone. When asked about the event's fundraising totals, Wordsmith Jarvinen commented, "I'll count it up in the morning. If we did as well as earlier we'll be out of deficit. My goal is to have a constant buffer in the account after paying all instructor stipends and tier quarterly." He went on to say their fund hadn't been in the positive since January, "Keeping Oxbridge runs about 107k $L per quarter, about 75k of that tier. ...I'm very hopeful that tonight turned the trick. ... I always feel very humble about the willingness of many to keep Oxbridge afloat."

It was a fun event that this summer helped us keep our cool.