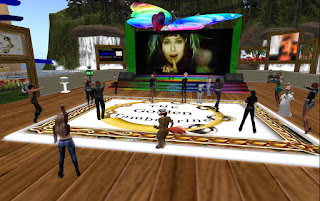 Earlier this month the wildfires in California made front page news when they burned the town of Paradise to the ground. Scenes of the devastation were shown in print, television, and Internet media. In Second Life about a week ago on Sunday November 11, there was a benefit party at The Golden Tambourine for Bella  Kross Swordthain (bella1 Abbot), of the Bonanza Country Club and the Captain of Team Bonanza of the Relay for Life. In the Relay group, people were invited to come over and donate to help her get back on her feet.

Join us at Golden Tambourine for Bella Abbot Benefit... Bella lost everything in Paradise CA Fire this week   Coral Sunset (224,208,22)   Captain of Team Bonanza - Cancer Survivor - Join Us as We Take Care Of Our Own! 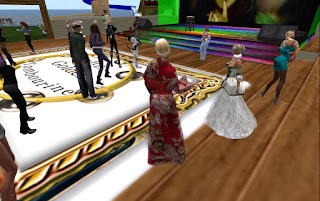 In group chat, people talked about how bad the situation for the people was, Sara Llewellyn (Sarandel Llewellyn) saying "Here's a glimpse into what used to be Paradise for 27,000 people: https://www.youtube.com/watch?v=4zJfPjB8_30 . " Sara Llewellyn (Sarandel Llewellyn) told the group about the firefighters combating the blaze, "Picture this: You're on an airplane. You look out and see a wildfire below. Your job is to jump out of your plane into the path of a raging inferno There are no hospitals for a hundred miles, no roads out of the area, and no water to be had. You have to put this monster out with just a shovel and a pickaxe. Just another day in the life of a California Smokejumper: https://www.youtube.com/watch?v=n0a-UcqrYFg ."

Dropping by, I was greeted with a hello, and saw a number from the Relay there, such as DJ Madonna and Trader Whipladh. "Help us help Bella, donate to the mushroom tip jar," someone spoke, directing attention to a tip jar on stage. Chipmunk Zhong, the owner of the Golden Tambourine, encouraged people to give, "All donations will go to Bella directly. ... She lost everything in real life, she staying with her sister and mom, her real-life hubby jojo and the doggie." She would describe a recent conversation with her, "when I had a chance to talk to her ... she kind of chuckled amongst her tears. She said, 'at least I don't have to worry about the skunks under my house anymore.' But deep down she is devastated." Shawna Love Compton (Shawna LittleBoots) spoke, "Well the fire took her home, But with Jo jo being hospital it saved there lives. I am sure God works in mysterious ways, but then there is other things that happen not so God. But I know he loves us all all the time." 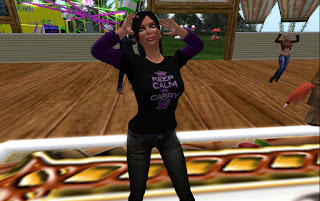 The original goal was to try to get a total of 100,000 Linden dollars donated, Trader Whiplash reminding everyone, "L$100,000 = about $400. That will help in so many ways. Let's make it happen!" People would talk about the wildfires in Paradise and other parts of California, "Just the Paradise fire alone the death toll is 23 people, 20 percent containment. And that isn't a complete count." "Yeah - they won't know the full impact until its over." Sara Llewellyn (Sarandel Llewellyn) talked about another disaster, "I remember watching a live stream last summer of the eruption of Kilauea - this man allowed a local news team to set up 24/7 video on his back porch. Could see lava fountains shooting up some 200 feet.....few days later they were all forced out of the area...he moved to the mainland ...month later his house/farm was wiped out by lava flows."

Shawna would request, "Bella's favorite song when I sang was 'One Day at A Time' by Chirsty Lane, if you could please play this for her because this is how her life will be now." Other songs played included "We Take Care Of Our Own" by Bruce Springsteen, and "I'll Be There For You" by Bon Jovi. 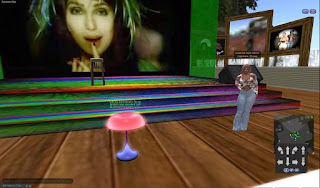 As time went on, the amount donated grew, "Please did deep in your pockets and donate to the mushroom tip jar." Finally at 1:35 PM, Chipmunk announced, "We made 100 thousand Lindens!" "Amazing!!!  L$100,000!" Trader then challenged everyone to reach a new goal, "L$25,000 more makes $500!" Others were up to the challenge, "Let's make this happen!" And the donations continued to come in. And at 1:58, two minutes before the party ended, Trader announced, "WE did it!" There were cheers all around.

After the party, there would be an announcement in the Relay group

"A big thank you to everyone for your love and support. I revived the Lindens raised, and will put them to good use to getting Jojo some toys and the things that wee need. The love and outpouring from my SL family and RFL family is amazing. You guys rock! Thank you again.

Another example of the generosity and camaraderie of the people in the Relay and Second Life.