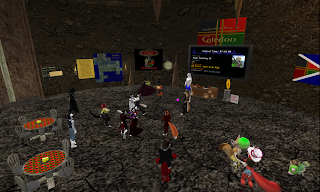 On Thursday October 3, there was a party at the Goblin Cave at Caledon Downs, in Caledon. The occasion, not just to celebrate the rezzday of it's owner, Cynthia Farshore, but also that of her friend Shockwave Yareach whom had his a few days earlier. Cynthia had come onto Second Life on October 03, 2009. Shockwave stepped onto Welcome Island on Sept 29 2006. Both are noted builders and members of the Sunbeamer Relay team.

As per prior notice, Rare Double Rezzday Party! Come join Shockwave Yareach and Cynthia Farshore as they both celebrate their rezzday. They are nearly to the day 3 years apart Shocky - 9/29/2006 and Cynthia  - 10/3/2009. Make your way to the Goblin Cave now at 6 PM SLT for around 2 hours of mixed music.

Both Shockwave and Cynthia are members of the Sunweaver community, but have ties to the Caledon one. And over the course of the party, people came by from both to wish them well. "It's a special bday for the Duchess," Shockwave told everyone, "10th Rezzday." "The Duke turned 13 (on) Sept 29," Cynthia responded. She played a number of songs, including a few birthday tunes like, "Happy Birthday Sweet Sixteen." She collected no tips, but there was a donation jar for Caledon Oxbridge University. There were also a few parodies such as "Born to be Mild." Someone wondered if a year in Second Life was equivalent to six in real life. One vixen grinned, "That would make me 69.  No thanks." 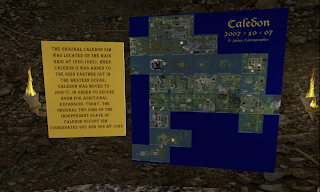 At one point, Cynthia contemplated, "I wonder myself why the Guv titled us Peer instead of Duke or Duchess?" Shockwave wondered, "He misspelled 'Pier' maybe, meaning you're pillars of the community?" Cynthia's friend Liska Fuchs mused, "The drug store pharmacist is the 'piller' of the community."

At another point, someone crashed, came back, and commented he felt like kicking his ISP.  Spooked Dreamscape commented, "Give the ISP an offer they can't refuse, 'Weed.'" Major General Badger commented, "But read the fine print first. Contracts are not legally binding nor do magical badgers accept liability for flood, fire or theft." Someone else joked, "Consult a honey badger before making deals with badgers." "I thought honey badgers didn't care?" spoke the one who crashed. "You want one representing you in court." Badger mused, "Sign in blood - mwhahaha - oops, did I say that out loud?

There was a birthday cake available for anyone to get a piece, Shockwave saying, "Everyone can get a slice of cake from the cake on the bar." Someone responded, "Good, shows that the motto is true. Cake does exist in Caledon." Andrea Jones mused, "It's made of pixels so not filling, eat as much as you want." Liska joked, "The cake is a lie." 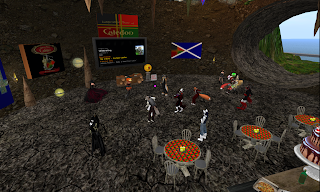 Over time, people came by, some to stay the whole time or most of it, some for an hour, others to just stop by to wish the two well, "It is always an honor to celebrate a RezDay!" Shockwave commented, "Always good to survive to have another." "May you both be in world for many more!"

As the party drew to a close, Cynthia reminded everyone of the movie at the Sunweaver's Feral Theater, "The movie The Nut Job will be playing at the theater in the Sunweaver Estates. Hopefully I can get the stream to also play here." Shockwave mused, "You'll go nuts for the movie."

Soon after, the party was over, and the people went their separate ways. But the Goblin Cave is still around for anyone wanting to stop by for a little music and maybe a game or two.