On Tuesday June 15th, there was an “Ex-Linden Independence Day Party” from about 11 AM to after 3 PM SL time. The party was held in Dublin 2 in a platform about a thousand meters in the air, inside a round hedge at one end. Ham Rambler, the owner of Dublin, was the DJ for the party attended by both ex-Lindens and still employed Lindens, or “not dead yet” as the running joke went. and those who came to wish them well. 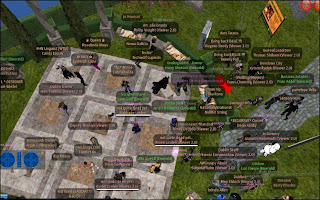 Among the ex-Lindens showing up were Teagan, Whump, and Neuro. Among the “not dead yet” were Aimee Linden in her pink wings, and Bryon Linden whom in his whimsy altered his avatar to make it look like a zombie: the walking dead. Both Lindens and residents came in a variety of avatars from normal human to tiny. Second Life Newspaper was told by one of the residents at the party there were close to 70 people in the sim at one point.

Near the teleport entrance were some t-shirts for the event, available for free. One sported the phrase, “I’ve been Lind “ex-ed.” There was also a link to a website where one could get a real-life version of them. Over the location was a large sign of Apple CEO Steve Jobs giving a speech to a graduating class, him saying “and then I got fired.” A reminder to those given pink slips that getting fired wasn’t the end. For those whom wanted to look around a little, at the other end of the platform was the Dublin tourism center. 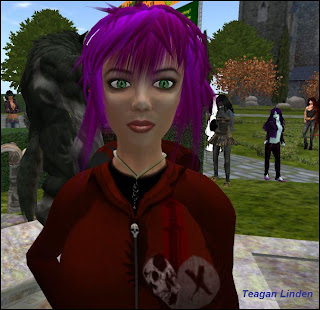 The party was supposed to end at 2 PM SL time, but continued for over an hour longer, people continuing to joke and laugh, Aimee Linden at one point joking she thought she was in her alt, and have a good time.

Some pictures by Second Life resident Brinda Allen (thank you).
Posted by Bixyl Shuftan at 12:01 AM