Some Events on the Day Philip Returned 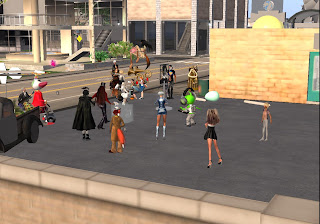 On Thursday June 24, Philip Linden announced his return as interim CEO, M Linden stepping down. The immediate reaction by many, if not the majority, upon hearing the news was to cheer. Group chats were full of people happy to see him back, especially as it meant M was no longer in charge. In private chats, people were more likely to express some caution. But out in the open, it was cheers for Philip and jeers for M.

I heard an announcement about a parade being organized in Bay City, and went over. Arriving there, I saw a number had gathered already. Two people had on duck costumes that I had seen in pictures of the sim's parades. Not really avatars, but parade costumes, “Hey, you’re a duck!” A couple more arrived with tubas, another with a guitar, another came as a Greenie DJ, and others. It wasn’t long before the parade started, Welcome back, Philip!” But with lag hitting, keeping track of the line of people was a problem as they often appeared only as green dots on the radar and not on the screen.

At the same time as the parade, there was a Metanews Panel, which had started at 2 PM. The bulletin I got stated, “With the recent news that M Linden is stepping down as CEO and Philip Linden returning as interim CEO, we will have a panel discussion to discuss what this means for Second Life and it’s future. Join us today at 2PM as we discuss this breaking story. Panelists include Phaylen Fairchild, Chantal Harveu, and Saffia Widdershins.” The two others were Gianna Borgnine and SecondLie Scribe, a self-described “malcontent” of Linden policies.

One panelist admitted she was fighting the temptation to “stand up and riverdance.” “If this were World of Warcraft, the announcement of the change of the CEO wouldn’t be nearly as big a deal.” “Not everything Mark did was a total loss.” One thought Philip had put Mark in charge due to pressure from the board. One panelist had originally approved with Mark when he was first appointed as he seemed more approachable than Philip. Of what this meant for Second Life, they disagreed. SecondLie thought the company really needed to address issues such as content theft, or otherwise it would decline into a niche market within “eighteen months.” Others were more optimistic, one saying that the idea that SL’s best days were behind it was “bull***t!” 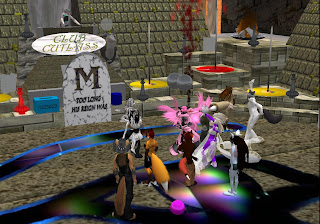 The Cutlass Club in Sunweaver Air was the scene of an impromptu party to celebrate M stepping down, with Shockwave Yareach as the DJ. A tombstone with a big “M” had been set up, along with a barbecue grill. It wasn't long before a crowd showed up, a couple people whom hadn't been there in a while. Shockwave's music was occasionally on the mark, such as the ‘70s song “M.” One girl was passing out “M” shoulder pets. Not eveyone there had harsh words for M Linden. A couple people felt he deserved better than the bad rap he was getting.

A few examples of what went on the grid the day Philip came back to his old position as the head of Linden Lab.