RFL "Rock the Cure" and "Bid Me Bald"

Even though people were celebrating in Second Life’s Seventh Birthday, Relay the Life’s quest to raise funds went on. From 10 PM SL time on Friday June 25th to 10 PM Saturday June 26 was the OD Designs Music Shop’s “OD’s Annual Rock the Cure.” 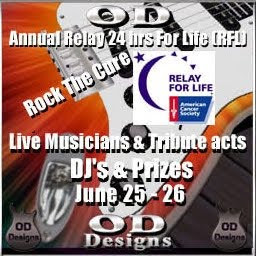 Team OD Relays 24 Hours For Life, Fun, Games, Music!!! Special Sales, Contest Boards, Free ODPoints, New Guitar Release, all to benefit the American Cancer Society, RFL!!!! We All Did Great Last Year, and This Year We All Going Do Even Better this year!!! 100% of everything the store takes in goes into the Kiosk!!!!

Beginning with a Van Halen Tribute, various DJs and live musicians rocked the store every hour for the next twenty-four hours. In addition, they sold some special items for charity. “Some rare guitars were sold,” told store director Leilani Teskat, “Some one offs and one of the very first guitars Ortho ever built. He had signed it too and sold it for all proceeds to the Relay For Life and the American Cancer Society.”

“Ortho is very, very, very big on charity work for ACS. He's very passionate about stamping out cancer. He got the whole gang of us involved like he does, some really great tribute players, with some long running tributes. Lots of DJs and also helpers too.” 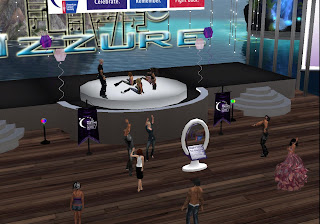 On Monday June 28, DJ Dione Kohime was the volunteer for the Relay for Life event “Bid Me Bald.” Hosted by DJ Hansel Blaisdale at Eternal Beacon, the event took place from 7 PM SL time to 9 PM. Dione danced away during the event on a white platform above the crowd, often with one or two friends with her. At various times, she would change her hair, from long and flowing blonde, to red beehive, to shoulder-length pink, etc. Hansel, in his dirty blonde hair with pink highlights and certain shade of arm tattoos looked a little green at first when rezzing.

The spunky neko had volunteered to go bald, nothing on her head but the fuzz on her kitty ears, for one day for every 5,000 Lindens raised. By 8:30, enough had been raised to keep her bald for 8 days. During the event, a few in the audience decided to get into the act. Not by going bald, but blonde. “K, its weird seeing **** as a blonde,” someone in the audience muttered, “Stop it, you are all freaking me out.”

At the last minute, there was a push that raised the amount to 45,000 Lindens at 8:59 PM. A few more was raised in the few minutes the event went over, but it was not enough for another day. A total of 47,500 Lindens were raised. There were a few jokes afterwards about what to do next. such as getting a certain guy to go female, “Just sit around an look cute, and watch the guys ask to have sex with you in IMs. (laughter)” When someone suggested that they strong-arm a guy into going back to a “noob” look, that was dismissed as too sadistic. 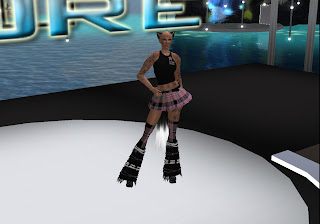 And true to her word, Dione went hairless, “I guess just that this is more than just a symbolic gesture of support. It helps us bring more awareness to Relay For Life of SL. It's a simple gesture, but it's been a successful and well received one.”

Dione has her own personal page on Relay for Life: Here.