Relay For Life: Walking the Walk

I’ve done the Second Life Relay for Life walk before, every year since after I got here, but this was the first I did so as a part of a team: the Passionate Redheads.

On Saturday July 17th, I ported to the Opening Ceremonies just before they started at 12 Noon SL time. The leader Sabine McGettigan along with officers Daaneth Kivioq and Dusk Griswold stood out by waving the team flag, which was probably the largest of those used by the RFL teams. The leaders of Relay addressed the residents gathered, thanking them for the funds already raised, and encouraging them for the main event in the Relay, the Walk. 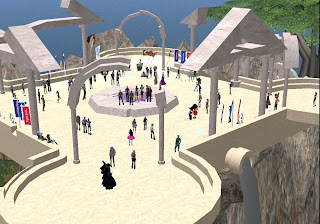 As the Opening Ceremonies came to a close, we (and the other Redheads there) ported to the Redhead camp at RFL Hope (125, 74, 22), where Rita Mariner, Treminari Huet, and a few others. It was named “A Readheaded Fairy Tale: Nothing is quite as it seems. The place had an overall storybook theme, with a little red riding hood (nontransfer) available for free. There was also a game, get a HUD by donating 100L, and search for gems, each representing a theme of the Relay. Get them all, and one would get a special prize. Various tales from Alice in Wonderland to Rapunzel were depicted. The build was mostly done by Shockwave Yarearch and Lomgren Smalls.

11 AM had been designated the “Survivor’s Walk.” Redhead leader Sabine McGettigan and someone whom I didn’t know was with the team until today, Elphias Kojishi, got onto the track, and began their lap around. About the time the started, we heard a song playing, one that would repeat again and again:

And did you think this fool could never win,
Well look at me, I’m coming back again
I got a taste of love in a simple way
And if you need to know while I’m standing, you just fade away 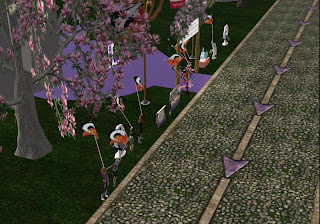 As other survivors passed, we would wave to them, some cheering. And the survivors would wave and cheer back. At 12 Noon, came the Caregivers Hour. Dusk Griswold, and Skylark Lefavre got onto the track.

As 1 PM approached, Sabine and Elphias came back to the base. A few more of the Redhead team were arriving for the team walk. Rita bragged the teams numbers would strain the servers, “Let’s crash a few sims.” And so at 1 PM it was our turn all at once to walk as participants, one sticking behind to keep the base manned. I had on the team shirt, and that huge flag waving in front of me as I stepped onto the course to join my friends. To help, we each had a “walker” on our backs that would allow us to follow someone, hopefully keeping going if lag ever hit.

With so many other avies, lag was a persistent problem. Sometimes I couldn’t see most of those around me. Sometimes it looked like there wasn’t much around me but a green field and segments of road. The lag also broke us up, how our different computers handled it slowing our progress at different rates. A couple times Daaneth teleported those behind to catch up. Once a sim was down for several minutes before it was finally open.

But other times most around me were visible, and I caught sight of some of the great builds. And the people I happened to encounter. There was Dione Kohime, the DJ whom went bald for the Relay last month. There was Glitter Xeltentat and Breezes Babii, former reporters of the old newspaper. And there was the lady who talked me into coming into Second Life to begin with, Kamilah Hauptmann, whom became Caledon’s Vicereine. When the lioness saw me, she roared with approval.

At 2 PM SL time, it was International Hour and we were still on the track. I put on a blue jacket and white pants, the coat of hair on my avie providing the red. It was about this time that we made it back to the Redhead base. For the first time, I had completed a lap at Relay. Other times, I had been too busy exploring the sights to finish.

As the day went on, I split my time by exploring a few of the sights, meeting up with some old friends here, and hanging out at the base chatting with friends. I caught sight of an enormous variety of avatars, from tinies to ferrals to nekoes to furries, and of course normal humans in a variety of hair styles shapes and clothes. There were various groups represented from the Victorian-age Caledonians, to the Sail 4 Life boating group, to the infamous Goreans, and many more.

At 9PM SL time was the Luminary. The atmosphere became more subdued as we were asked to keep a respectful tone for those friends and loves ones lost to cancer. Some among us felt close to tears as we thought of them. I didn’t attend the main ceremony, but did hear whom among the Redheads was honored. Artistic Fimicloud and Littledove were among those passed away honored. Those honored for their work with the Relay included Sabine McGettigan and Alleara Snoodle. 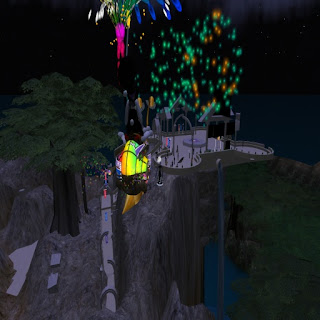 Yours truly couldn’t stay up for the late night/early morning events. I logged on briefly in the morning, Sunday July 18th, to catch some of the “fight back” hour, with people running the track in purple capes. There was also the “Caring & Curing Hour,” which had people dressed up as doctors and nurses. And with the Redheads’ sense of humor, there were a few “helllloooooo nurse!” quips. Sorry to say real life kept me away from the closing ceremonies and fireworks, but I got enough pictures to see it was quite a show.

Sabine had the following closing statement in an announcement:

Relay for Life of SL is officially over, The Kiosks will stay active until the end of the month, and the Campsite will stay up until Tuesday evening (tear down Weds & Thurs). We may add a bit to our totals, but we raised 1,643,900 L - or a bit over $6,300 USD. With our convio donations, we should hit $7,000 USD - which given the economy, is an outstanding performance.

But its about a lot more than the money. Its about the healing, the love, the sharing we have been able to do.

The Redheads also got a trophy, "Longest Running Team" in the Relay for Life.

The Redheads were just one of many teams. The official website stated over 1500 avatars in 139 teams took part in he Walk. Over 52 million Lindens had been raised to this point, for a total of over $219,000. For the first time, an amount less than the year before, which is thought to be because of the economy.

Even though the Relay was over, people continued to hold events in the sims, and of course explore around. There are still a few more stories to be told, a few more souvenirs to collect, a few more sights to see, and a few more memories to gather.

Cancer might not be beaten tomorrow, but we took pride in that we helped make it’s demise a little close, and for those among us who suffered, they reminded themselves in spite of what was thrown against them, they were still standing.


And did you think this fool could never win,
Well look at me, I’m coming back again
I got a taste of love in a simple way
And if you need to know while I’m standing, you just fade away