It's hard to believe Tart Gallery is 3 already! The Gallery, owned by artist ByrneDarkly Cazalet, is a gallery with an aim toward showcasing new artists, both from RL and SL.

Artists have showings on a quasi-monthly basis, with some exhibits holding over into a second month. Each new exhibit is highlighted by an opening party to browse and meet the artist, complete with DJ music and dancing. 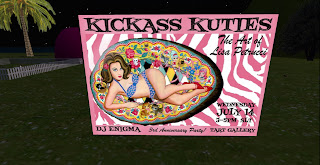 On 14 July, the Anniversary Party took place. This month's featured artist is Lisa Petrucci with her exhibit "Kickass Kuties."

Lisa was a gallery curator in Portland, Maine and Boston, Massachusetts, eventually relocating to New York City where she was the director of the Pat Hearn Gallery and later the Bess Cutler Gallery. Disenchanted with the contemporary art world, she moved to the west coast, where she got involved with the burgeoning lowbrow art scene and eventually settled in Seattle after meeting her partner in crime and soulmate, Mike Vraney. 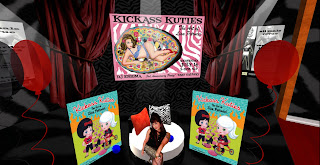 Over the years Lisa’s obsession with pop culture grew. Collecting old toys, pin-up art and vintage magazines ultimately inspired her own artwork and she found the perfect format for her imagery – the round bark border of the souvenir wood plaque. "Each slab of wood is lovingly painted with the things she enjoys most and celebrate femininity and all that is cute."

Lisa is now considered to be a part of the Pop Surrealism movement and has been featured in many diverse publications, including her own deluxe art book “Kickass Kuties – The Art of Lisa Petrucci” published by Dark Horse.

For more on Lisa Petrucci, visit her website at http://www.lisapetrucci.com. Her paintings can be viewed inworld at the Slustleria sim at (68, 234, 28).