Tygeria Mirabeau, the owner of the popular Mystery sim, didn’t have a birthday until a couple days later on Monday. But manager Amythe Moonlight wanted to throw a little surprise party for her Saturday morning. So she messaged a few friends to show up at 8:30 AM SL time. Among the people were live musicians Maxx Sabertooth, and the popular Debi Latte.

As the time neared, people began showing up at the Queen of Hearts riverboat club. Amy and staff member Ajay Carpenter had already set the stage up, a big “Happy Birthday Tygeria” sign on stage with the letters flashing, a birthday cake, and for some reason, a platter of sushi. The reason for the gift of raw fish was never given. 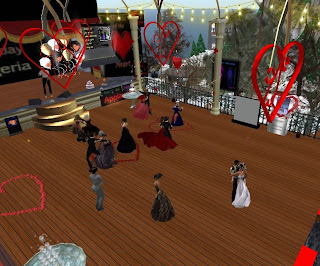 As 9 AM approached, Amy announced Tygeria was online, but was out of the sim looking at something. So Amy thought of something, “Okay folks! Get ready! I’m IMing her that there’s trouble here.” So we waited, and after a couple minutes, she chuckled, “She’s away from the keyboard (giggle). Hang onto your hats!” And a couple minutes later, there were shouts of “Whhoohhooooooo!”, “Happy Birthday, Tyg!”, “and HAPPY BIRTHDAY TYGERIA!!” Tygeria was stunned quiet for a few moments, before commenting, “Thank you.” She would later say she had tears in her eyes behind her computer.

And with that, Maxx Sabertooth took to the stage, he began singing, and everyone broke out into dance. Amy invited people to, “Call your friends and lets make this the best party ever!” And so as the party went on, more guests arrived. Among them was a lady elsewhere from Second Life media, Persia Bravin. Seeing me, “Are we stalking each other around SL? (laughter).”

Before long, the sim was so packed, a couple of the men sat down so they were less likely to crash from the grid, “Wow talk about a graphics glitch...from here it looked like Ayjay was doing the splits.” “At his age?” Late in the hour Max got offstage and into the middle of the dance floor, “Look out! Wild man off stage!” 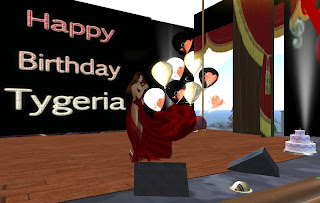 At 10 AM, Debi Latte got on stage, wearing a flowing red dress, starting off singing “Happy Birthday” to Tygeria. Supposedly, she skipped lunch to sing, her local time being 1 PM. Someone must have promised Tyg flowers, because for part of the hour she was in a flower costume. And it wasn’t long before Debi was singing the club’s signature song, “Queen of Hearts.”

“Playing with the Queen of Hearts,
knowing it ain’t really smart,
the joker ain’t the only fool,
who’ll do anything for you.”

There were a few examples of “creative misbehaving” going on. This included someone trying to swipe the cookie off a lady microfox, “Nooooo! Not my cookie!” A lady then grabbed his hands, “Noooooooooo! Want cookie!” “(giggles)Too bad!” She then started to drag him away from the foot tall vixen, “Nooooo!” “Will you stop trying to take that cookie? ... The poor little thing is going to crawl up your pant leg and bite you where the sun doesn’t shine.” 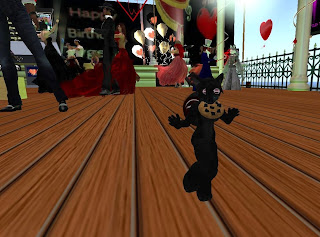 Tygeria kept cracking naughty jokes at Debi, which got her giggling a bit, "How am I supposed to keep singing cool songs if you keep making me laugh, Tyg?" Late in the hour, her curiosity got the best of her and she got off stage and headed to the back, Y'all are misbehaving, I want to see what's going on." She then saw the lady microvixen had a dance partner, a second microfox, and giggled a bit. It was about this time someone found the fireworks, and launched a few rounds, giving a pyrotechnic display for the birthday girl.

Finally at 11 AM, Debi concluded her hour of live music. She signed off, and the radio came back on. But people continued to dance for a while on the riverboat’s top deck. Some of those who did stop dancing explored the sim for a while, which had recently been given a winter look with a covering of snow. And the sim does have a lot to explore from the mountain to the manor, to the village, and more.

Surprise parties are nothing new to Mystery. In September 2009, it was Tygeria who pulled a surprise rezzday party on Amy. It’s a sure thing the surprises will continue.