Veterans Tribute Events on the US Marines’ Anniversary

November 10th was the 235th anniversary of the founding of the United States Marine Corps. In Second Life, The Second Life Veterans’ Tribute at Pelton Creek had a few special events in addition to their DJs and live musicians such as DJ Ramblin Rick and guitarist Kitzie Lane. 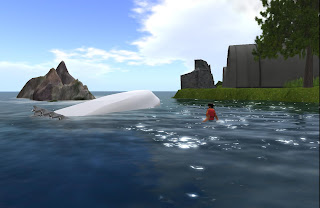 From 6 to 8 PM SL time, the Flying Tigers did an air show. Over the sim, the various planes from the air group performed acrobatics for the residents, taking off from the runway in the southern part of the sim. At 7 PM, there was a Coast Guard rescue demonstration. A civilian-owned pleasure craft puttered from the docks a short distance, then floundered, going belly-up. The boater lit a bright green smoke signal, visible from across the sim, and bobbed at the surface wearing a life vest, “Many boaters do not bother to take this step, and don’t make it,” the announcer shouted. It wasn’t much longer before a rescue helicopter appeared on the scene, dropping a basket, and the boater was safe. 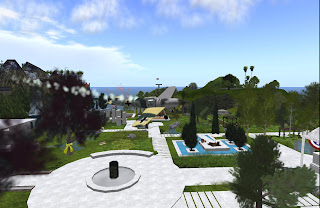 At 8 PM, the air show took on a new form. Those Flying Tigers in the air landed, and two other air groups prepared to take off, the RA Biggin Hill Squadron in their Spitfires, and JG-2, the “Richthofens,” in their Messerschmit Me109s. They went up to engage in a virtual reenactment tribute of the Battle of Britain to thrill those below. Unfortunately, the sim was a bit laggy to some, hard to move or finding other planes hard to see at times. But the dogfight continued, with both shooting and fancy manuvers. After about an hour, JG-2s commander Vickster Khun ordered the German planes down, “We lost the Battle of Britain after all.”

Vickster has had a busy time at the Tribute, not only representing JG-2, but also taking on other roles. At one point, she commented, “I have had to change hats four times today,” then chuckled. 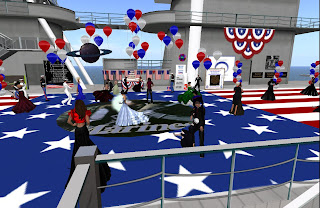 Following the dogfight, the pilots were invited to join those on the carrier for the dance, the SLVT volunteers and other guests, including veterans. Among the decorations for the party, a birthday cake for the United States Marine Corps.

It was a great day for the Second Life Veterans Tribute.

The Tribute goes on until the Closing Ceremonies at 6 PM