Some Events on Halloween Weekend 2010

There’s just something about Halloween that brings out the creative side in people, both in real life and Second Life. Second LIfe can be a little Halloweenish to begin with as people are free to make their avatars more or less what they want them to look like. In the last few days of October, however, people can be a lot more free with their imaginations.

On Friday night the 29th, came a bittersweet event for some in the vampire community. A popular vamp club, “The Damned,” was all set to shut it’s doors after one final party. Some of it’s patrons had been regulars at the “Vampire & Succubus Club” in the past. Not everyone at the club was a vamp, there were also a number of furred avatars there. The party went on until the clock struck Midnight. And with that, the revelers wished each other well, and bade their hangout goodbye.

With Halloween falling on a Sunday, some of the bigger celebrations fell on Saturday. Many clubs and other places held their Halloween party or other big event on this day. Moolto and Team Phoenix had theirs in the early afternoon. In the late afternoon, I briefly dropped by a trivia event at XR hosted by Hydra Shaftoe of “The 1st Question.” Winners got 25L for each correct answer. 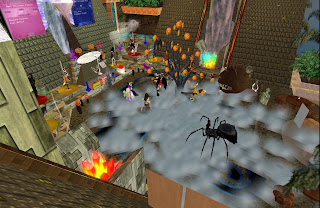 An aviation group, the Flying Tigers, held a party at the bar in their airfield sim, inviting the pilots of the rival Richthofen group to join them. The dance ball of the party was a little model red triplane spinning around in the air. The winner of the contest, a “dead pilot” skeleton in a flying cap. No word on if he ever uttered, “Curse you Red Baron!”

The residential sim of yours truly, Sunweaver Air, also held it’s big bash at the Cutlass Club, with residents going all out. A number of decorations were set up, complete with a spooky fog covering the dance floor. From a pixie, to a zombie, to a beholder, to a biiiiig spider, there was no shortage of variety in the costumes. There was even a little improvised roleplay as the beholder had it’s owner in it’s jaws, and a hatchet-wielding girl ran up to try a “rescue.” 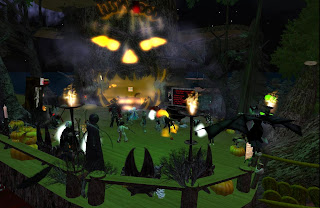 Luskwood had it’s own Halloween bash. This year, the residents made a more impressive show than previous parties, painting the decks a spooky green, putting up all sorts of decorations, including a noob floating in a bloody pool, and giving the hollow in the Great Tree a spook-tacular look, making it look like a scary, twisted face with open jaws leading to a glowing interior. They held a 10,000 Linden costume contest, which had two tying for first. They also had a special holiday-themed avatar on sale. The party went on to Midnight with a number of shenanigans taking place, including one lady who made the mistake of blurting “Bite me!” within earshot of a vampire bat. 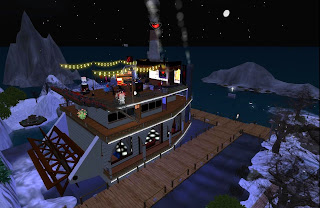 Sunday had fewer big events, but there were some. The Mystery Sim held it’s Halloween Event at Noon, with singer Debi Latte performing live to a nearly-packed sim, the revelers packed on the riverboat club’s top deck. As in other parties, there were all kinds of costumes from the scary in the form of a skeleton Grim Reaper to the humorous in the form of a vampire duck. Cowgirl Head Hostess Micah Giha was a “milkmaid” offering glasses of milk on a try to partiers (no word on where it came from). The event lasted longer than the planned hour, close to an hour and a half.

There were other events. In the New Bastogne combat RP sim, an “apple bob” was set up, with soldiers on both sides calling an uneasy truce to go after the prizes. Prizes ranged from junk, to freebie vehicles, and for a lucky few tanks and warplanes. Yours truly got a junk car for his efforts.

Closer to home, SpiritValley had it’s Halloween bash with devilgirls on dancing poles. Cutlass had it’s “Euro party” with a Halloween theme, the French and English wanting in on the fun, along with the Americans who joined in. And there were some private residence parties. Nydia Tungsten invited me and other neighbors, and friends, to her pad.