Chantal Harvey and the Month of Machinima

When the Linden Endowment of the Arts (LEA) stated "The Month of Machinima (MoM) event" would begin on May 4, 2011, it opened a door to creative perspectives and the magic of machinima.

The event's objectives were to promote the infinite possibilities of writing, producing and editing this wonderful art form. 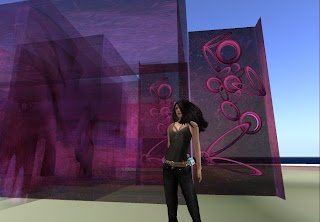 At the forefront of SL's machinima creation is Chantal Harvey. Anyone watching treet.tv has seen her active promotion and recognized her grace and artistic expression.

According to Chantal, machinima is filming in a virtual world or game. What you see on your screen, is what is filmed. The process begins with the creation of a concept, the writing of a script, finding a location or building a set.

We stand on the LEA sim in the heart of imagination, a playground, as Chantal calls it. A tall cone-shaped theater is the dominating form and numerous screens play one machinima. They are short visions made possible by Second Life and the imagination of the director.

Chantal states that the production is intense work considering the time necessary to record and edit.

“It varies, sometimes I spend six weeks filming and editing for one minute of film the other extreme is filming an SL event and putting it on youtube, without edit, in that case it can be a fast and easy production,” Chantal explained.

She said that machinima is a new genre. The term was created by Hugh Hancock and originates from the words machine and cinema.

“It was a spelling mistake that caught on, we like the word. Originally, it comes from gamers that recorded their battles and races online, because they wanted to share their high scores. People started to edit the shoots, and manipulate stories like that,” she added.

Chantal said that the LEA site was started by M. Linden, in 2010. When he left Linden Lab, LEA was put on hold, but then Courtney Linden picked it up and motivated others to carry on the project. 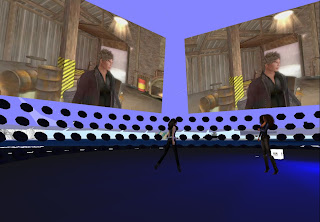 “We have weekly meetings and each member of LEA has a different discipline/input. Over the past 15 months, we have become a group that divides tasks and works close together,” said Chantal.

To make a submission, log on to; https://spreadsheets.google.com/viewform?
formkey=dDZ3a2FsYjJMNEM5dnU4X1VZZ1FQZ1E6MQ&ifq&ndplr=1 . Submissions can be made until the 10th of each month. A screening committee then selects the top films. Art related are preferred, but they also choose other work – each month at least 3 films that were submitted earlier in the year. Every first Wednesday of the month, at 7 pm SL time, the new films begin with a screening event and the films run in the special MoM theater throughout the month.

Interest in MoM is generated through Twitter, Facebook, the SL wiki, SL blog, Chantal’s blog and her machinima groups. A lot of it is introduced through networking.

“I’m hoping for more bloggers to write about MoM, as it is the most wonderful machinima event supported by Linden Lab ever. It celebrates the films and the film makers, giving them the credits they so rightly deserve,” she stated.

As for Chantal’s work, she started creating machinima in 2007. In real life, she’s an editor and was part of pioneering art-tv projects. For many years, she ran a TV station in the Netherlands. She’s Dutch.

She told me, “I produce, film, direct, edit, I do SFX and sound design and voice-over work. I advice other machinimatographers. I produce the 48 Hour Film Project for machinima, a real life contest. I run my own MMIF.org Machinima festival in Amsterdam/SL, and I recently started working with Tony Dyson (R2-D2 creator) to produce professional machinima productions.”

Chantal has won several awards, one of which she treasures is “Best Edit” in 2008 48HFP, when she was a contestant. She later became the producer of the event. She has created over 200 productions during the last four years. Check them out at http://youtube.com/user/ChantalHarvey .

What does Chantal foresee for machinima’s future?

“It will go mainstream. I cannot imagine it would not do that. It is fresh, young, growing; it has huge potential to go real life. TV stations all over the world are cutting down on production costs, I believe that if we add a little more professionalism to our films, they will be discovered and appear on TV, maybe even a movie,” she said.

Netera Landar
Posted by Bixyl Shuftan at 6:00 AM