Interview With Ginette Pinazzo on the Zindra Expo

Recently, Second Life Newser talked with Ginette Pinazzo, one of the organizers of the Zindra Expo next month in August. She wanted to explain what it was about, as well as how it would differ from the first one last year. The interview took place on a boat sailing about in the Zindra area. 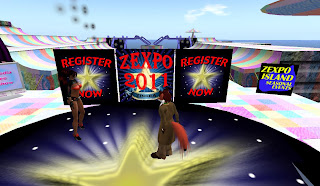 Bixyl Shuftan: How did the Zindra Expo get started?

Ginette Pinazzo: The first one was last April, ZEXPO 2010. It was started by the Linden Lab group Zindar Expo, as an attempt to create a large convention/festival to highlight the adult mainland of Zindra.

Bixyl Shuftan: Was it any trouble to organize?

Ginette Pinazzo: Back then things were new, just starting. (We) didnt have the focus we have now. I wasn’t producer then, (though) I was involved in it. But this year its an all new staff.

Bixyl Shuftan: So this year, it's off to a more organized start?

Ginette Pinazzo: First the Island itself (caleld ZEXPO Island, coincidentally!) was turned into a venue where we have large seasonal events. For example, in January we had Art Maze 2011. And now we have ZEXPO 2011. This year, (a) much more organized start.

Bixyl Shuftan: Sounds good, what have some of those events been?

Ginette Pinazzo: There is continuity between the very large events (and if you like marketing talk). It’s important because we can build excitement, attract new people to the continent, and slowly increase our PR more and more with each event. It’s all part of an effort to increase Zindra's positive Public Relations.

For example, in the Art Maze, we attracted many Second Life artists, and gallery owners and gallery-goers, builders and photographers became involved. We had a great time...and there's your positive movement forward!

Bixyl Shuftan: How did the expo go last year?

Ginette Pinazzo: I was involved in last year’s ZEXPO in the Marketing Dept. From what I could tell, it went ok. But then it was more like a merchant mall with some events sprinkled in. It was all Zindra merchants. This year is a larger concept, weve opened the concept up.

The way I see it, and partly the reason behind this entire Island's event program, is that we want new people here. So that includes opening things up to get non-Zindran particpants. So the events aren't just about Zindra. It's fantastic for PR and Business Growth and community growth to bring new people and business here. Ginette Pinazzo: This years ZEXPO will have exhibitors from all over Second Life. As I say, Zindra and Beyond.

Bixyl Shuftan: What are among the things are you planning to attract those who don't travel to Zyndra often?

Ginette Pinazzo: Well, attraction is a great word. We are trying to breathe a new sense into the term 'adult' here. Part of our “show message” is that Adult = Sophisticated. We want people top see that Zindra is important because, as the A-Rated mainland, its the most liberating place in Second Life. Yes there will be adult content here, of course. But its not all sex. It's anything and everything adults are free to explore (within our show's guidelines of course). There will be everything from scripting groups to hair designs to building classes to crazy amusement rides. Education, entertainment, arts, and things to buy, games to play.

Bixyl Shuftan: What kinds of rides?

Ginette Pinazzo: Well, our theme this year is "Forbidden Carnival" so expect some crazy twisted rides and carnival games mixed in. We have various vehicle designers too, who have contributed vehicles, so you can "tour" the island in different ways

Bixyl Shuftan: I suppose one's imagination can come up with possibilities about what kinds of games to expect here, but I should let you explain some examples.

Ginette Pinazzo: Hmmm...we have some interesting takes on the “treasure hunt.” We have a “Find The Impossible Objects” game.

Ginette Pinazzo: Hahaha! Accidental pun! sorry! In that game, artist Harter Fall crated different optical illusion-style sculptures and you have to find them throughout the showgrounds. We have also have a Sea Creature Hunt, where you sail around the island trying to find sea creatures (and maybe collect eggs).

The focus is on attractions..not just events. So there will be many things to see and do, regardless of when you are here. We really want to present an interactive environment so packed with fun, you will want to book a hotel room and stay all 10 days.

Bixyl Shuftan: Sounds good. What comes with the hotel room, or around here, do I need to ask? *grin*

Ginette Pinazzo: We have 3 different hotel providers: Acerta VP , DLK and Sin City. Each varies in booking arrangements, ambiance and benefits. We are leaving those choices to the designers of the hotels. But I think its safe to assume each will have its own exclusive content. So booking a hotel room will be a great way to add to your experience. And besides, we ALL know the best parties at conventions happen at the hotel rooms

Ginette Pinazzo: We also are doing the hotel thing because we want this to be as immerse as possible. 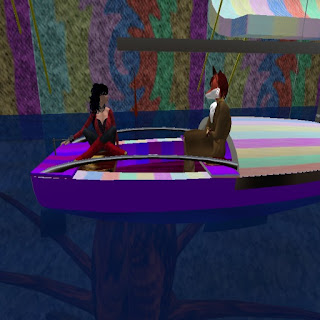 It was at this moment the boat we were on changed course.

Bixyl Shuftan: Nice little boat. I take it there will be a few more of these at the Expo?

Ginette Pinazzo: Oh yes, boats will be definitely one mode of vehicle available. There will be boats, horses, blimps, crazy cars, cycles, and you will even be able to ride the Floats in our ongoing Forbidden Float Contest.

Ginette Pinazzo: Yes, one of the innovative things we've done is make the amount of floor space an Exhibitors gets, related to how much they DO at the show. If they host events or provide attractions, they get more floorpsace. This gives us a lot more content and keeps the exhibitors more involved. One way they can get more space is build a float for a parade we have running through the showgrounds. It’s a little bit of extra advertising for exhibitors, a little bit of art, pageantry, and something you can also ride. That is, if you are the type of person who likes to be in parade.

Bixyl Shuftan: I imagine most would would like it, if hopping on didn't crash the float

Ginette Pinazzo: Hahaha! I’m sure we’ll be testing that. So if you want to volunteer as a float-hopper tester, call me!

Ginette Pinazzo: the organizing is going well. I don’t believe in doing any large event without many months of preparation. This eliminates all stress and makes it fun.

Ginette Pinazzo: And any problem can be resolved if you allow time. Flexibility is easier when you have time to stretch. So, I do a lot of stretching.

Bixyl Shuftan: Was August chosen as the month, because it falls between two large events, Burn2 and the Relay for Life Walk?

Ginette Pinazzo: Yes, and also to coordinate around SLCC. It’s almost impossible to choose the best dates when there are so many great things happening all year. But I think in the end, we just tossed a Linden out a window to see where he landed on a giant calendar. And that’s how we chose the actual date.

Bixyl Shuftan: *chuckles* That would be something to see.

Ginette Pinazzo: Speaking of Burn, that’s one of the large asscoiations/organisations that has a presence at ZEXPO. Burn will be providing some content. I want to work with other communities and orgs to build strong relationships. I believe in cross-promoting as much as possible. One thing I like about the way we are doing this show, though, it’s not about buying floorspace, it’s a free show to participate in. It’s about creative and active investment. Like I said, the more you DO, the more space you get. You can be a very small company, but if you are willing to do a lot here, you can have more presence than a large company.

Ginette Pinazzo: I think its good business strategy to mix hard working, very involved smaller companies., with larger ones who may not be as, 'involved.' This way the networking can be very very healthy. Also, even before this show opens on August 26, we will using that previous week to run a Business Networking program, so the many exhibitors can meet each other and connect. Second Life is really about people, and when we talk about business in Second Life, it’s often people meeting other people and connecting. It’s a people business in almost every sense.

In Second Life, there is more of a direct connection between a product or service and the person who created it. Think about it. Even an event like this, it’s really just people coming together, choosing to create an experience for each other and everyone else around them. People like myself and merely facilitating that natural, organic process.

Of course, there is always an underlying structure. But ideally, its one that transparent to the observer.

Bixyl Shuftan: I think I've asked most of the questions I had, I did have a couple I could ask just for chuckles. 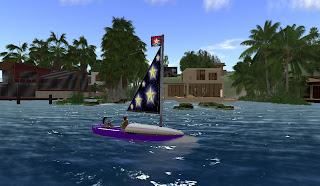 Ginette Pinazzo: Sure, go for it! But if I laugh too hard, this boat WILL crash. I barely know what I’m doing here.

Bixyl Shuftan: Well, when you mentioned there would be a variety of vehicles here, I take it vans and pickups with lots of space in the back can be expected?

Ginette Pinazzo: Actually, new vehicle creators seem to be everywhere. I have no idea how many will have. I even saw a giant flying dinosaur that people might be able to ride.

Ginette Pinazzo: Yes! Some of the vehicles will be free, wearble or rezzable, or borrowable. Otehrs will have low cost rental. Some will be items you buy. I haven't noticed vans yet, but why not?

Ginette Pinazzo: Haha! We ARE having a rock n’ roll car wash. From what I understand, its a car wash operated by a team of Sissies.

Bixyl Shuftan: A team of sissies. Could you explain the term?

Ginette Pinazzo thought the term meant cross-dressing males whom acted a bit submissive, but didn’t feel qualified to define them

Ginette Pinazzo:It definately seems to be a community in Second Life, a very “SL type” thing. I never knew that term until I fell into SL. I learned a lot of terms here.

Ginette and I talked a little about things on the Grid for a few more minutes, but this was basicaly the end of the interview.

For more information on the Zindra Expo, check out the Zindra news blog, and The website “Zindra: Projects and Proposals for a Healthy and Dynamic Adult Mainland.” Considering occasional content, both are “Not Safe For Work.”