From June 20th to June 26th, Second Life held it’s official eighth birthday celebrations. The last two days fell on the weekend, so it was a chance for those busy during the week to come by, as well as be there longer. Time to see some of the events, both DJs and live musicians playing, plus the lectures and talk and game shows making special appearances. 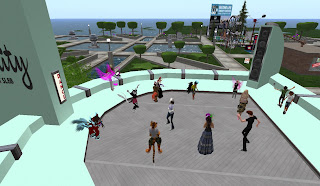 Dropping in on Saturday the 25th, I found out Marx Dudek, the “Unique Bunny” as she once called herself with her custom avatar, was DJing at the Bay City Exhibit. So I dropped in to say hello, and enjoyed listening and dancing to the classic rock songs of the 1950’s and early 60’s. It was about this time a few friends I hadn’t seen much online lately logged on. We chatted a little over Instant Message, and thinking they would enjoy the music , I suggested the come over. They did, asking where the dance animator was, and joining in.

The friends in question are worth a mention. One is a US Army soldier back home from Afghanistan. He was wearing, of all things, a “Brony” avatar. What the hey would the symbol of American testosterone be doing in an “ODed on cute” avatar? Maybe it was for some joke. Or maybe it suggests something about what he had to face while performing the duties of “rough men who ensure the rest of civilization sleeps peacefully at night.”

The other friend was Gwyenalin Gausman, who came over with her real-life daughter. Gwen’s been on Second Life for a couple years, her “Gathering Place” in Second Life a testimony for those suffering from chronic pain and Fybromyalgia. She told me she had started a group for chronic pain, which recently had it’s first meeting.

After the Bay City event, I looked around for a while. I came across another group of people dancing away, and recognized the DJ: GoSpeed Racer. Longtime readers of Second Life Newspaper may recognize the name: she DJed for a few of it’s newspaper parties, as well as her station sponsoring the paper for a time. Speed appears in a female av, and not a dark-haired male, but she does have her own Mach-5 (I never saw it jack up in the air, though). Besides DJing, Speed’s spent some time in the sci-fi multiplayer online game “Eve Online” and told me of a recent development there (more on that in another article). 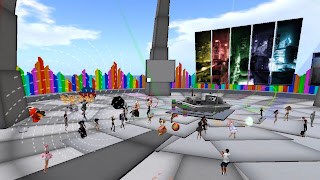 Before long, I heard Gemma Cleanslate’s partner DJ Quark was doing his own event, so I told Speed and her friends goodbye and ported over. Quark was doing his Trance tunes, and Gemma was there in her “dwarf giant” racing snail avatar. The place was quite crowded (the picture taken before everyone rezzed), and Quark was making a good impression on everyone. Then came a problem. Someone was streaming the place with particles, not just once or twice but again and again, and rezzing objects. She was politely asked to stop, but she angrily gripped she had every right to display whatever she wanted to, and had no intention of stopping. Maybe I should have changed to my skunk avatar and shot some spray particles in her direction.

Sunday June 26th was the last chance to see public events in the SL8B area. Some of the events were recorded on Second Life TV, such as Lauren Live and the First Question. Lauren Wayland’s usual comedy routine occasionally gets a little off-color, so she had to check with Linden labs about which words she could use for her Second Life Birthday special, “don’t worry, they’re all okay.” Still, although individual words were sometimes clean, the meaning was obvious, “What’s the worst chat line? ‘Is it big enough?’ I mean, come on! if it isn’t big enough, right click and just, stretch. (laughter) If only we could do that in real life.” And there were other jokes, like the made-up word, “Lagalicious: lag that you actually enjoy.” And one questions he was asked, “As a girl in Second Life, do you get cramps? Only when I TP.” 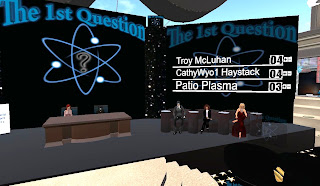 Also on Sunday was Pookymedia’s “The 1st Question” Championship show, with winners of three previous shows, Troy McLuhan, CathyWyo1 Haystack, and Patio Plasma. It wasn’t the easiest episode to listen to, as the stream carried background music instead of the Treet.tv broadcast. But the winner’s name was clearly on the screen: Troy McLuhan. Following the show, Pooky Amsterdam’s staff of tinies lined up and did one of the “Tiny Riverdance” routines that had been occurring at the SL8B time to time. This one was a little smaller than others that were screenshotted, but it drew cheers and applause all the same.

There were a few more events that night, but the nagging migraine in my head was Mother Nature telling me it was time to give Second Life a break and return to reality, celebrations be darned. And so, farewell to the Second Life Eighth Birthday event. I would be able to return to see the exhibits ( although not as often as I wanted to), but the official events were over.