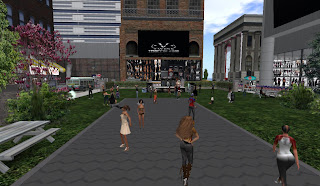 Sunday September 11th was the ten year anniversary of the terrorists attacks that took more than three thousand lives in Arlington Virginia, Shanksvile Pennsylvania, and NewYork City. Across Second Life, residents took part in various commemorations across the grid. Some were well-publicized, and drew hundreds of people. Others were quietly attended by only a few. But all honored the innocent victims and rescue workers whom fell that day.

One of the memorials to get the most attendance was most likely the World Trade Center Memorial in the New York NYC sim. Taking a look at the sim a couple days earlier, there were about 3,000 flags, mostly American, placed on the streets. In the northwest corner of the sims, a transparent replica of the twin towers reached high into the sky. Next to both towers was a small memorial park, with a statue of a firefighter leaning down, and bronze reliefs of firefighters on the wall: “Dedicated to those who fell, and those who carry on.” The place wasn’t all memorial, though. Much of the sim was commercial shops

Dropping by the next day, the place was packed with close to fifty avatars. Many were gathered in a small park across the road from the memorial part, listening to various live music performers. A problem developed when a griefer tried to stir up trouble, but few paid attention to him. 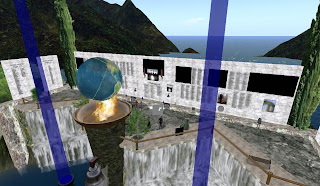 The other 9/11 memorial mentioned in the Destination Guide was the 911 Memorial at Stagg Island. Despite the name of the sim (I never looked much beyond the memorial at the outside land in the sim. Large walls of white granite held the names of the fallen as waterfalls behind the memorial. There was a huge brazier, made to look like a torch, the Earth floating over it. Two columns of blue light reached into the sky. The back of the memorial was a waterfall, which was described as symbolizing the “tears of the world.”

On 9/11/2011, there will be several ceremonies in remembrance of the innocent lives lost on 9/11/2001. This will NOT be a show, political statement , or religious event. If you wish to pray in the faith of your choice, please feel free to do so.

Ceremonies were held four times that day. Dropping in between them, I heard both soothing music and narration, at one point the voice spoke, "Thank you for coming here ladies & gentlemen. Now if you don't think Second Life has a heart, if someone says that, tell them … well, you know what to tell them." 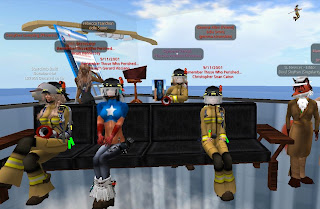 Another memorial that got plenty of residents dropping in was the Stairclimb in Aero Pines. Opened a few days before September 11th, many people were continuing to drop by and climb the tall staircase. Some remained at ground level, either watching the documentary up for view, or contemplated about the events that day. The stairclimb had been getting attention from musicians as well, one doing a 9/11 machinima there. More on this memorial can be read in the article Here.

Some events didn’t have many decorations or extra builds. At the Mystery sim, many of the staff gathered along with regulars of events to contemplate what had happened ten years before. DJ Bloodrose writer played songs and excerpts of speeches, a mix consisting of Martin Luther King’s “We Shall Overcome,” to “I Will Remember You,” to Johnny Cash’s “Ragged Old Flag,” to Metalica’s “Don’t Tread on Me.” He also narrated. 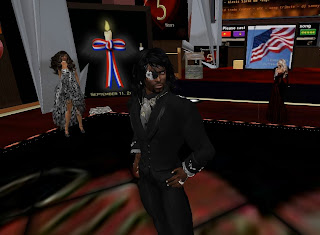 “Ten years later, there are still some questions and mystery on what happened and why. Many have theories, but evil is evil, and the attack upon the helpless was a woeful and dishonorable act. And though time passes and for some memories fade. But justice and right, like a phoenix, was reborn from the ashes, and will soar to heights not seen before. Not America or American, not New Yorkers or those losing loved ones, but HUMANITY will become and has become stronger. But we must never forget, or we will be dammed to repeat it.”

Not all the staff were there. The sim owner was absent. At one point, Bloodrose spoke, “Many years ago, before the tragedy, A lady had a dream to be a singer. She worked toward this, and she & her husband had it as a goal. All she did was to improve her voice and learn how to sing. On September 11th, she lost her husband her main cheerleader and father to her daughter. She then recorded a song.” And then after the name and title were announced, the song began playing.

“This is your club owner Alexis 'Tygeria Mirabeau,’ “ Bloodrose told, “who cannot be with us today. But she thanks all of those who remember. ... This is the first year the owner has given permission to speak on her story,” he would explain later, “She is at the unveiling of the memorial and will bestow her blessings on all and thanks from her and her daughter to you all for not forgetting and remembering.”

Much more happened at the Mystery vigil, the details of which can be read on the Queen of Hearts Blog.

Numerous comments were expressed in group announcements. Tuna Oddfellow, who runs the psychedelic “Odd Ball” had this to say, “Boliver Oddfellow, aka Drew Stein, was a SL developer and friend to many of us. He and Tuna used to joke that they were virtually brothers. On this day, ten years ago, while many were running away from the Twin Towers, Bolliver was running in, as a volunteer first responder. Some months ago, we lost him to sarcoidosis. http://www.nyc.gov/html/doh/wtc/html/know/physical.shtml”

Club Zero Gravity owner Nydia Tungsten, usually known for her daring choices of songs in DJ events, had some thoughtful comments, “Today is the day. 10 years ago so many people died with out even knowing why, day we will never forget, how we spent the day watching and hoping, a day of evil to be sure, but never forget we also learned of hero's those that risked their own life to help others, and those that paid the ultimate price, over 3000 people lost their lives that day all because one group wants us to believe the way they do, and to make us live in fear, well they failed, we still live, not in fear but with our heads held high, knowing we are not better than they, but our lives mean more, we fight back with fuller lives, so take this day to remember not just the victims, but those you love.”

It was a day of remembrance, both in real life and Second Life. This year did have a couple differences. The NYC sim, made by a Brookliner and had some ceremonies involving the SLFD, was no longer around. It was also the first year in which the mastermind of the atrocity was not somewhere out there, still plotting, but was dead, having been shot a few months earlier cowering behind a woman.

Ten years later, that dreadful day is passing to history, the world a different place, but people still take the time to remember and reflect.

“If we do not remember the past we will be forever doomed to repeat it.” - Nydia Tungsten.