On Friday February 3rd, 7:30 SL time, the noted Second Life game show "the 1st Question" held a special Friday show. Besides the unusual Friday showing, the show was different in other ways. Treet.tv was doing an unusual live broadcasting, the first of the game show since it ended regular live programing in July 2011. The popular co-host Hydra Shaftoe was taking a break from his retirement for a one-time appearance. 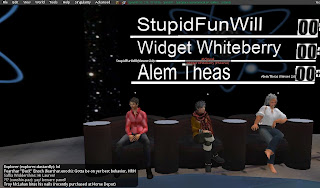 Then there were the contestants. One was Widget Whiteberry, the co-producer of the Second Life news & politics talk show Virtually Speaking. Another guest was an name in computing in Real-Life, Grady Booch, known as Alem Theas inworld. He is known for the "Booch Method" in software engineering. First in line left-to-right at the contestant seating was the man described as having "created the simulation game genre" - Will Wright. Beginning with Sim-City in 1989, he was behind a number of simulation games, including "the Sims" series and "Spore." In October 2011, he joined Linden Lab's Board of Directors. Showing a sense of humor, his in-world name was StupidFunWill Resident.

Pooky Amsterdam, who hosts the show, sent notices in her groups and the show's message list about an hour before the show began. To make sure the show wouldn't be too bugged, the number of people allowed in the Spindrift sim would be capped. Those who couldn't get in did have the option of an "overflow" location at the Garden of Dreams sim (Designing World), or watching it on the treet.tv website. 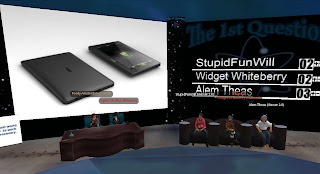 For those not familiar with the game show, it billed itself as "fast-paced fact-based fun of science related merrymaking, audience participation, prizes, wit, and wisdom." It was described more simply by one fan as "like having lunch with Albert Einstein." In the past, it ran for a full hour every Sunday, and was broadcasted live on Treet.tv. More recently, the show was cut to a half hour, and then done once a month on the first Sunday each month. But the show remains as popular as ever, attracting a packed audience during shows. Among the regulars are other noted Second Life residents such as comedian Lauren Weyland. Before each show as early arrivals wait for it to begin, the staff's tiny performers do a small skit to entertain them.

Following the tinies' tale of a mad scientist creating a monster, the audience was wondering if Linden Will Wright would end up the winner that evening. And he did make a good showing. On "Word-Up" when the contestants made up a word for the audience to pick the best one, Will Wright chose "Perplexinated," being both perplexed and fascinated by something and having a strange attraction to it. Grady Booch chose "Poligusted," being disgusted by politics. 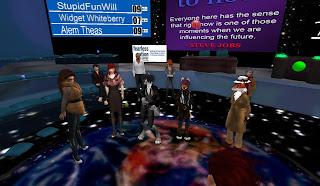 Despite some good answers, Will Wright didn't get first place. He took second, while the computer technician Grady Booch ended up the Winner. He was given an undisclosed prize package. Although SL Newser hoped to talk to Will Wright after the show, he promptly teleported out of the studio. Pooky and Hydra talked with the audience for a while, some welcoming Hydra back even if it was for just one episode. Talk soon turned to more casual topics, including some joking around over gestures.

The show can be seen in the Treet.tv archives in a few days. The next episode of "the 1st Question" is scheduled for March 4, 2012.

For CNN's take on the show, Click Here for Any1 Gynoid's article.

*Addition* The archived show can be seen - Here.