June 6 marked the 68th anniversary of D-Day in Europe, when the Allied invasion of Normany was launched, paving the way for the liberation of France and eventually the defeat of Germany. In Second Life, there was a commemorative event held by both the Flying Tigers and New Bastogne's German groups at the WW2 Battlefield sim, two sims north of the Flying Tiger airbase in WW2 Tribute. Several German players took up defensive positions on the ground while some of the Luftwaffe flew up in fighters. The Flying Tigers attacked in British and American planes. 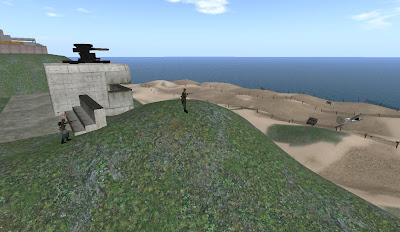 Two German players on the hill while their tank rolls onto the beach. 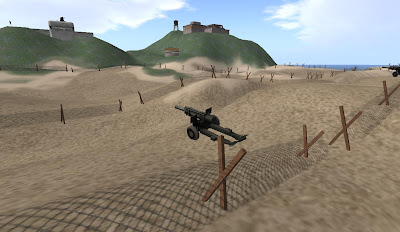 An Allied cannon presumably set up by the attackers, but the soldiers are nowhere to be seen. 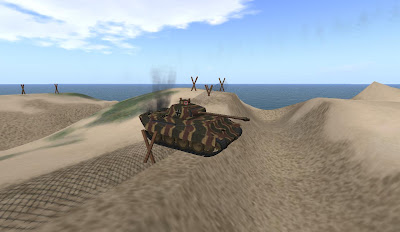 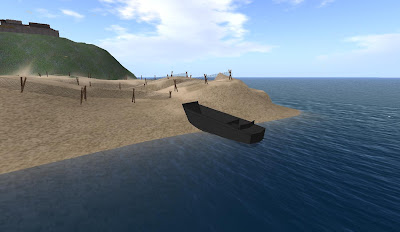 One of the Allied landing craft lies empty, the soldiers somewhere on the beach. 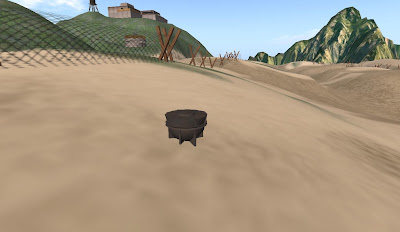 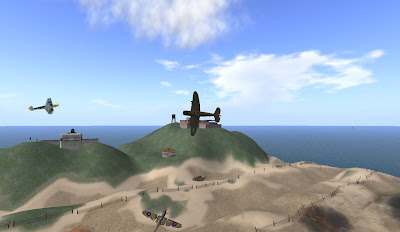 Planes dueling in the skies, a German Me109 versus a British Spitfire and an American Thunderbolt. 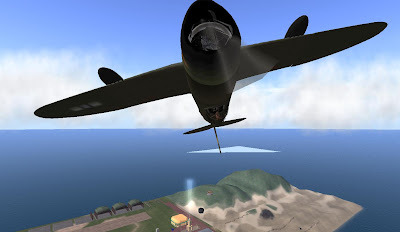 A close-up look at the Thunderbolt. 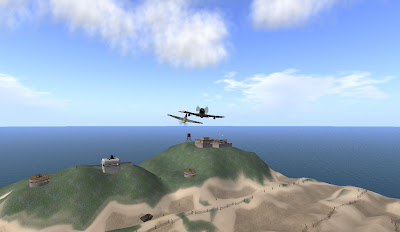 The Me109 manages to get on the Thunderbolt's tail. 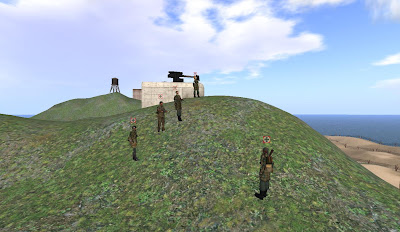 When the commemorative battle is over, the German soldiers get together, Heer (army), Luftwaffe paratroopers, and Waffen-SS. 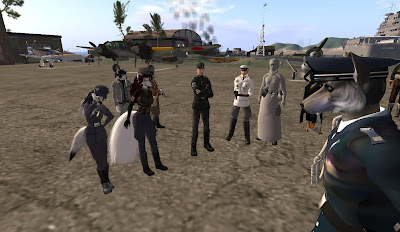 The pilots, both Luftwaffe and Flying Tigers, met at the latter's airbase. On the right is Captain Umaga, who planned the event. 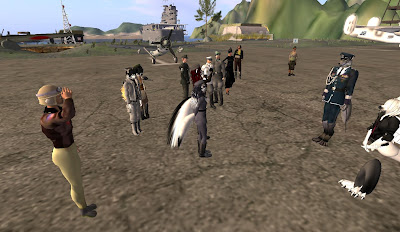 Some pilots, Luftwaffe and Allied, had more than just airplane tails. 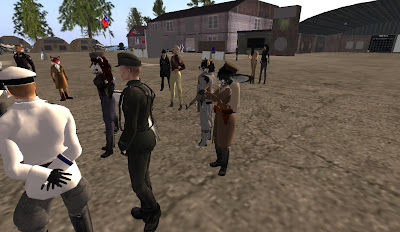 "We are gathered here to commemorate those who fell on this Day, June 6th. ... Speeches have been written over this event since after VE-Day (VJ-Day). And they all claim that the Generation that went out to fight in WW2, was the best Generation EVER.

"I most and sincerely disagree with that statement that during all armed conflicts stretching from the past way into the future. I will make this statement: THOSE who raised arms to fend for their Country and Loved ones: Those who shared a dream of a righteous world, Those who was tricked into armed combat by Sly Politicians, Mind Smothering Religious leaders. What  matters is not wheather they Won or Lost. They gave the most valuable thing: their LIFE. And to those that survived, I see you as witnesses to Man's Madness when it becomes unleashed.
"So to all Veterans, Civilians from ANY theater of armed conflict. You fought for what you believed in. You protected your Country and Family.
"So Stand Tall, since I claim you all the BEST of YOUR GENERATION!!

"So To Honor those who fought on this day June 6th 1944. I Request for a Minute of Silence"

Following the battle, German GeneralMajor Vickster Khun posted the following, "I'm extremely proud of all members who participated in today's D-Day event in the Flying Tigers area. Our leaders did a great job with no notice or prep-time, and our soldiers of the SS, Heer, and Luftwaffe demonstrated the power of our command. Flying Tigers Command sends their thanks as well!"

For more pictures, check both the article on the Flying Tigers website (here), and Alois Setzer's WW2 Roleplay in Second Life (here).