Monday June 18th was the first official day of the Second Life Ninth Birthday. Like others before it, this one began with a commencement speech. Before, it had been done by one of the Lindens. But this time, Linden Lab wasn't involved in the anniversary event at all, save for a little publicity on the destination and events guides on it's website. So someone else would be giving it. 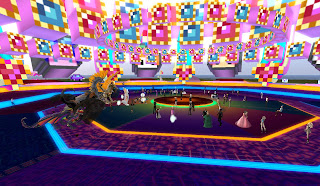 The speech was scheduled at 11AM, and as the time approached, people began gathering at the four-sim cake stage to wait for the speaker. It was anticipated that the four sims would be crowded, so it was announced the speech would be heard on the radio streams covering the road system. For some reason, the majority were showing up in the southeastern cake sim of Tisa, including the large dragon avatars present. When it's numbers approached fifty, staff began asking people to move from the southwest corner to other sims. The northeast sim of Neun had less than half, and sometimes less than a third of the people whom were on Tisa. At one point, one of the sims went offline.

Finally at 11:30AM came an announcement, "Thank you for joining us! It is my great pleasure to introduce our speaker. This woman is one of those most responsible for the existence of this centralized celebration." And to the calls of "Yay!" and "Yes!" stepped up the speaker, Second Life media personality Saffia Widdershins of the Prim Perfect blog and the "Designing Worlds" Tree.tv show.

"Hello everyone, and welcome to SL9B!" Saffia spoke in voice, with the speech also announced throughout the four sims in chat, "Welcome to over three hundred exhibits created by the denizens of Second Life and spread across twenty sims. Welcome to a week of music and performance by the finest in Second Life. And there will, unfortunately, be lag.  And possibly, like a rainstorm on the barbecue, there will be sim crashes.  But, you know, we live in Second Life.  We’ll keep calm and carry on."

"There’s presents – yes. It’s just like those parties you had when you were very young, at least you do in the UK, when you leave with a swag bag of goodies. There’s cake. There’s beer. Please remember, though, to take your litter home with you."


"They suggested that we take the theme of community, and celebrate in our own communities. I think I can safely say that that decision disappointed a great many. There were those people who had already started their builds, in anticipation of the opportunity to exhibit on the largest communal platform that Second Life annually offers. There were scores – no, hundreds of people who were preparing to donate their time and energy to the celebrations: the musicians, the educators, the greeters, the estate managers and assistants." 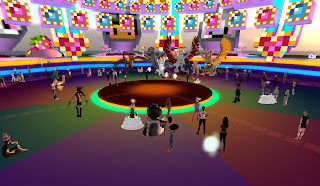 "But we nearly didn’t carry on at all.  Back in April, on April 16th, just over two months ago, there was an announcement by the grid operators, Linden Lab, that they would not be donating any sims for the community birthday party this year. What would we have lost, if we had accepted what Linden Lab had said, and partied in our own communities? I think the clear answer is that we would have lost our sense of a greater community."

"But that didn’t happen."

"For what was an agonizing month, there seemed to be hope. But finally, on May 9th, just over a month ago, it became clear that there would be no communal sims from the Lab. And with that final 'No,' it all seemed hopeless. How could the huge birthday party, the biggest annual celebration in Second Life, be gathered together, organized, built and launched in what amounted to ... five weeks?"

"And that was when we found our fantastic sponsors. Let’s salute Zeebster Colasanti and his team from DreamSeeker Estates, who donated ten sims, and his lead here at SL9B, Samantha Ohrberg. Let’s salute Callie Cline of KittyCatS and Equinox Pinion and Dennis Lagan of Fruit Islands, who donated two sims each. Let’s salute our anonymous donor, who gave a further six sims. Thank you – for having faith in the Birthday, for having trust in the community that we would make the birthday happen. Thank you for your belief in the Second Life community."

"As we started pulling things together, I heard one question more and more: 'Why are you celebrating Second Life’s birthday, when Linden Lab can’t be bothered to? Why are all you people putting in time, and money and so much work when Linden Lab can’t even drop twenty sims on the grid for a month and say, 'Here you are. Get on with it.' ”

"And, you know, I have an answer for that. It’s not Linden Lab’s birthday. It’s ours."

"Yes, Linden Lab have created the framework. They have given us the grid, the land on which to build our dreams, and sometimes our nightmares.  They hold the data that drives our Second Lives. They’ve given us the power and the ability to shape our imaginations in virtual forms. Amazing, wonderful virtual forms. But, it’s not their birthday. It’s ours."

"I hope that on June 23rd they’ll be opening the champagne in the Lab, maybe some of it non-alcoholic, and much of it organic. They are, after all, in California. I hope that they’ll be exchanging a few stories, a few laughs, a few guilty chuckles over where the bodies are buried.  I hope that one or two will raise some bright shiny ideas, 'Hey, wouldn’t this be cool to do?' And I hope that they then don’t spring that shiny coolness on us without consultation and rigorous testing! And I hope they raise a glass, a rueful, bewildered, maybe slightly apprehensive, maybe slightly awed glass of champagne, and drink to the denizens of Second Life – that awesome, troublesome, mulish, mutinous, sarcastic, angry, loving, fabulously creative group of real life people who make Second Life what it is."

"Because it’s not Linden Lab’s birthday.  It’s ours. We built it. Everything you see here – and everything you will see across the grid was built by the denizens of Second Life. Who hoped that people would want to come – and wondered, to begin with, if we needed more than four sims. Or ten. And who were then deluged by people wanting to join us and be part of the Best Birthday Ever."

"The Exhibitor Assistants who have been on hand 24/7 to make sure that everyone who needed help and support would have it – pretty damn near instantly. Doctor Gascoigne. KT Syakumi. Diana Renoir. Honour Macmillan. Marianne McCann. Rails Bailey. Crap Mariner. Thank you. Without you, this wouldn’t have happened. Without your hard work, your perseverance, your unparalleled ability to stay patient and smiling in the face of everything that the grid and its denizens can throw at you has been just mindblowing."

"But none of this celebration  would have happened without the efforts of a small, dedicated and totally awesome group of people who took those twenty sims and bashed them into shape. The stage managers who will be making sure the stages stay stable, and that the streams work and all the artists appearing are happy.  So, thank you. hank you to Mikati Slade, who built this amazing four sim Birthday Cake stage. hank you to Kaz, Kazuhiro Aridian who built the Lake stage. Thank you to Donpatchy Dagostino, who built the Lotus stage and the wonderful train. Thank you again to KT Syakumi who created the breathtaking Egyptian stage … and the breath-holding underwater stage!"

"Thank you to Artistide (Artee) Despres, who made the Community Hub that links this event to the other SL9B events that are happening across the entire grid. Thank you to Bo Tiger – whose lovely HUD is going to have us all bouncing happily from A to J and back over to Q ... Thank you to Yavanna Llanfair who has made the pod tours that provide the most amazing way of seeing the sims. And thank you to the hundreds of volunteers who have come together to make sure this happens. And thank you to all those people donating gifts to the Egyptian expedition and to David Abbot for writing the fun tale you’re all about to read!"

"This was the year of the hasty training classes, the year of the flying by the seat of our pants, the panics and the crazy improvisations and the last minute ideas so shiny that they just had to be acted on. This was the year of the last minute birthday party and, I hope you’ll all agree, we pulled it off. And while all that was going on, we had to make sure that people knew – so they would know to come and visit. o from the beginning, there was a team of bloggers and media people dedicated to making sure that the word got out to as many people as possible. Daniel Voyager, Inara Pey, and Ginette Pinazzo."

"This was the year of the 'last minute.' his was the year of discovering that more and more people wanted to join us, to help, to perform – so this was the year of the last minute fifth stage and the frantic re-arranging of schedules. But, thank heavens, it doesn’t have to be like this. Next year is the Big One.  The Tenth Birthday. We’ll be entering double figures – and we’ll be shouting to the world that Second Life is bigger and better than it ever was – a place where we have claimed our world for our imagination. Because it will be Huge.  There will be more sims, more exhibits, more art, more music, more of everything than ever before.  And, believe me, we’ll be prepared. And we’ll be holding our first planning meeting  ... well, maybe in a month or so."

"Because today, and for the rest of this week, we’re going to PARTY!"

"So unleash the Dragons! Bring on the dancing tinies!" 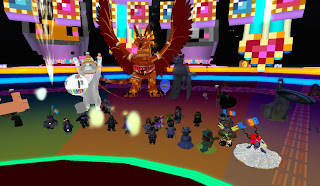 And with that, the audience cheered. The dragons roared, some flying up into the air. A line of tinies began doing Raglan Shire's characteristic "Riverdance." And everyone else erupted in cheers of "Yes!" "Yay!" and applause gestures.

With the end of the commencement, the sims across the SL9B region opened, though not without some trouble as some had trouble 'porting in, and the lag made it difficult for some to move around.

But it was a speech that made a great deal of residents proud.

*Update* The recording of the opening, by Petlove Petshop for Metaworld Broadcasting (turn up the volume).