From June 22nd to June 24th, the various teams of the Relay for Life held the "Back to the 50's" Weekend. For three days the Relayers, and others who came by for a good time, went about the "RFL 50s Weekend" sim, going on rides, dancing at parties, playing various games, and on occasion getting tossed in jail. 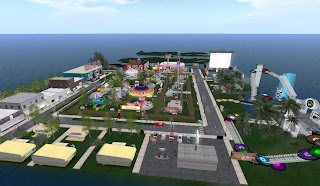 The temporary sim, set up next to the ACS island and sponsored by Runaround Sue's, had a look of a town in the 1950s during a fair. along the edges were stores and housing just to help with the atmosphere. The gas station was more interesting with it's line of classic cars on display. The two diners could be fun places to go to. But even better was the roller skating rink where people could roll around. To really roll around, there was a roller-record coaster with was decorated with huge records. There was a drive-in movie where movies could be seen, as well as more classic cars. There was the "Sock Hop" place where people danced at events of the same name. And there was the police station, where the RFL volunteer cops served out warrants for the "Jail and Bail."

In the center of town was the fairgrounds. There were various rides, such as the merry-go-rounds and the "Kamakazie." There was also a kids inflatable "moon walk." There were a number of goodies for sale, the donations going to whichever teams put them up. There was a small "Labyrinth" maze, which was a bit tricky to navigate due to it's nearly transparent glass walls. There was a kissing booth, with charges from 25 to 100 Lindens, but never saw it used. 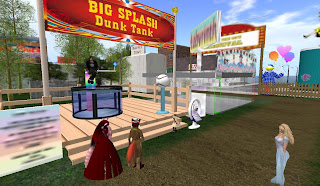 One ride that I saw get some use was the mechanical bull. Some cracked jokes about threatening the bull with being made a steak if they lost. Despite the negative reinforcement, I only saw one person get as far as 30 seconds. The top five listed exceeded that, the winner having stayed on for about eighty seconds. An even more popular attraction was the dunk tank. Volunteers would sit over the water, often taunting pitchers to hit them, and more often than not they did, sending the avatar into the tank for a soaking.

Then there was the "Jail and Bail." In one corner of the town was the city jail where the volunteer RFL police force, Sherrif Blossum Bluebird and her deputies, sat around munching donuts and served warrants for arrest. There were two cells, one relatively clean and modern with pexiglass windows. The other old and a bit dingy with iron bars and a couple rats running around. Prisoners would inevitably complain of innocence and demand to be released, get better conditions, or see counsel.


The Sheriff and her deputies are polishing their badges and getting ready for what is sure to be a busy weekend at the Back to the 50's Jail. Remember to place one of your team kiosks at the Police Station - Your team can then contact Blossum Bluebird or Nightwalker Galaxy  to have someone arrested. The person arrested can either pay 500 linden to avoid going to jail or go to jail and try to raise 1000 from their friends to get out. When bail is paid it goes into your team kiosk. So have your team prepare a list of who they would like our police staff to arrest! Mug shots available at the  jail. Make sure they are online when requested an arrest.


Talking with one of the deputies, he listed some of the charges made so far as fairly tame, from jaywalking, to flying without a license, to "saying boobs too much." But while we were talking, a drunk tiny with a bottle in one hand and a bazooka in the other walked in and fired the weapon at a file cabinet, setting it afire. The shocked police promptly slapped their cuffs on the offender.

And as it turned out, among those arrested was the Captain of the Passionate Redheads, Dusk Griswold. Dusk got served the warrant and was arrested "for doing the Bunny-Hop in a line dance zone." So an appeal to "Bail out the Bunneh" was sent to the rest of the Redheads. 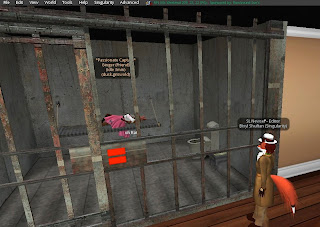 Poor Dusk. A girl can't have a fun dance without getting in trouble it seems. She did the "Bunny Hop" with a few friends, only to find out it was a "Line Dance Zone." So the owner pressed charges, and now she's "on ice," "in the can," "in the hoosegow," "in the slammer," and all other expressions for being in the Relay for Life 50s Weekend Jail. So come on over and bail out the poor, overworked, hard luck bunny (but at least we can now say she's not so boring).


It wasn't long before help arrived for Dusk. Nydia Tungsten and Skylark Lefarve arrived to deliver the bail money, Nydia chastising the bunnygirl, "serves you right, you lush!" Dusk's mug shot was taken before she left. Others arrested later on included Dwen Dooley and DJ Graylon Ash, whom did some "Jailhouse Rock" from his cell. While the total amount the Jail and Bail brought in is unknown, it took in a total of 60,584 on Saturday alone.

Other events included a Best Dressed contest and a Trivia Game, "Think you know the 50's? Make sure you're there for our trivia game. Every correct answer will earn you a fun vintage prize AND L$1,000 to place in your own team's kiosk. And there will be a special grand prize to the person with the most correct answers." The winner of the Best Dressed was was Daisy Darkrose, who sported a purple poodle skirt, purple being the big color with the Relay for Life.  And the Trivia Contest? Dusk Griswold came out on top to give the Passionate Redheads a needed boost in Lindens. 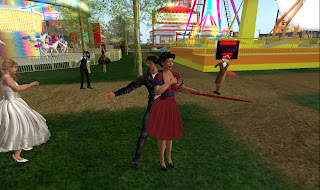 And of course there were the DJ events at the carnival, near the dunking booth. Besides "Jailhouse Rock" DJ Graylon Ash, other DJs included Holocluck Henly and Fuzzball Ortega. In what was becoming a trend with Relay events, some "Bronzings" were held, bringing a small team up to the 10,000 Lindens level.

Thank You to all "Back to the 50s" teams for letting us do this.
Go teams! Go Relay!

With the end of DJ Madonna's session, the 50s Weekend came to a close. Many thousands had been raised for the teams, and a good time was had by most everyone, at least those who didn't spend too long in the Jail and Bail.

As of the writing of this article, the Passionate Redheads have just passed the 200,000 Linden mark, with Gold rank still 50K away. The Steelhead Salmons at 427,750 L raised have a little over 70K to make it to Platinum level. Two teams have made it to Purple level, Amaretto Ranch and Frends Fighting Cancer with each over six million Lindens raised. So far this season, over 73 million Lindens have been raised, equal to 294,000 U S dollars.

With July around the corner, the end of the Relay season is within sight. Steelhead has a couple more RFL events, the Critter Races on July 1st and the Moon Dance on July 6th. But the teams are making plans for their various displays at "The Walk," and work will soon began for the final event: Relay Weekend on July 14th and 15th.