The End of the 1000 Avatars Exhibit 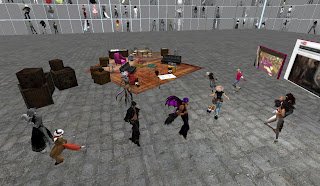 On the afternoon of Sunday June 3, 2012, Gracie Kendal's 1000 Avatars exhibit came to a close. Before the end, the artist threw a party at Noon SL time to celebrate it's success, and a number of friends and fans came by during the time. Among them were artists Scottius Polke and Wizard Gynoid, and blogger Treminari Huet.


Gracie's friend Kaj Juutilainen DJed for the event high above the Coyote sim. During the time people talked about when they and friends had their pictures taken, about the mixed reality art show she held in both Second Life and a Los Angeles art gallery about a month earlier, and general joking around, such as the "crab dance" gestures. 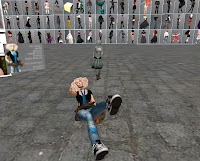 Finally at five minutes after 3PM, Gracie asked, "Are we ready? … Oh, we may want to fly, 'cuz you may fall (laughter). … Ready to take down the installation. (smile)" Scottius began chanting, "Tear down the wall! Tear down the wall!" Gracie laughed, "Hahaha Scottie." Then she turned to the DJ, "Ohhh Kaj, some Floyd? 'Tear Down The Wall?' Heeheehee." "Great call Gracie!" one of the other attendees cheered, and soon Pink Floyd's "The Wall" came up. 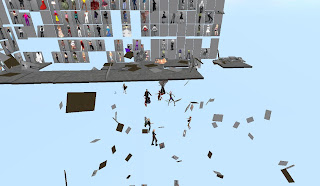 "There we go!" And with Gracie's announcement the place began to crumble. The 2000 avatar pictures became individual bricks as the bonds holding them began loosening, and they began plummeting down. The floor came apart too, and also fell down in chunks, "Whoah!" "Wow." "Oh wait, there go my keys!" ""Oh my God! They are all going separately." "(singing) All in all, you're just another prim in the wall."

And soon, there was nothing left of the build, save the artist and the others whom were there, floating around, "Damn, that was cool." "That rawked!!" Gracie grinned, "Hey, I could always rez it and do it again (laughter)." For a few minutes, everyone continued to hang around. Then everyone began to head their separate ways.

And so the 1000 Avatar Project is over. But it still exists in the minds of the 2000 people who took part and numerous others whom stopped by, and of course numerous Flickr pages, articles and pictures, and numerous screenshots in who-knows-how-many computers.

"It’s been a great run these past couple years. The 1000 Avatars project has been a wonderful experience for me. I am so lucky to have met all the people and made so many new friends. Online identity is still very important to me and I definitely continue to work on other art projects relating to it."

For more information on Gracie Kendal's 1000 Avatar Project, go to it's website at http://1000avatars.wordpress.com/ .


"Thank you to all who attended the fun and exciting event. You guys rock!!!"